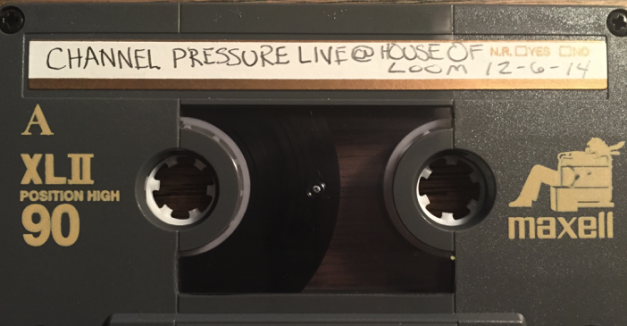 Graham Ulicny and Todd Fink both have a penchant for the experimental and electronic. They’ve recently teamed up on a new side project that allows them to explore through improvisation.

Channel Pressure was born at The Faint studio, Enamel, after Ulicny and a fellow Reptar bandmate performed an improvisational electronic show across the street from Fink’s house. Fink was working with his own live setup, and after the two joined forces, debuted it on the House of Loom dance floor.

Fink wouldn’t call today’s debut a collection of songs as much as thematic variations. He and Ulicny use different gear each night — no computers, only analog synths, drum machines and samplers —  which keeps the project fresh and its players constantly engaged.

“It’s kinda scary and that’s what i like about it,” Fink says. “It gets messy and noisy but that is what makes the moments where everything syncs up so glorious.”

Lincoln Calling is becoming massive, and organizers are asking for bands and fans alike to help with its 2016 planning. The downtown Lincoln music festival has grown annually since inaugural 2003 run, boosting its lineup to more than 100 local and national bands and spreading west from 14th and O into new venues.

Organizers have assembled a survey to gather suggestions for next year’s event. It asks what parts of the festival are vital, what should be improved and who you want to see in 2015.

Lincoln-based Tymbal Tapes is keeping the medium alive with a fresh, international batch of releases.

The experimental/ambient label drops four new tapes this weekend, all with roots both regional and distant. In keeping with the label’s far reaching mission, it features artists from Chicago, Texas, Romania and San Francisco. Here’s a brief take on each release, courtesy of label boss Scott Scholz:

Arvo Zylo’s work is often the product of literal years of toil, the potent result of countless hours refining, perfecting, and focusing wild energies. Projects like his “333” and “Assembly” feel more like they’ve been finished in a metal refinery than a mastering house, their labyrinthine vertical layers chosen and fixed in place with firm force.

These Upheaval versions, each created in a single sitting from one block of material, act as industrial etudes, a peek behind the curtain at Zylo’s unique approach to sound, space, and the art of the edit. Enjoy these fluid sessions of extemporaneous work from a master aural sculptor.

IXTAB create a music that resonates on many levels. Bringing prodigious intellect to body music, and blending vintage electronics with environmental atmospheres, Voice-Hand may metabolize your dreams and tone your subtle body. And savor your ride through occasional shadows–as Il hombre invisible himself once articulated:

“When I become Death, Death is the seed from which I grow” –WSB

The followup to this Romanian duo’s brilliant ABECD on Baba Vanga, “GAMA” is an immersive, intuitive, cinematic suite. Recommended for headphones or robust speaker separation. Also stay tuned for a sort of companion album coming soon on Baba Vanga.

Tymbal is vibrating with joy at this bran(…)pos album, as the label’s name came from his excitement at the sounds of late summer cicadas at Tymbal Tapes HQ in the midst of a tour several years ago. And his observations about the chickens in our backyard led to this proposal for a conceptual trilogy, laid out in pairs of pieces across three tapes:

The first time Jessica and Heather Hottman’s voices blend into harmony, it’s to posit that maybe the voice in “Our Home” is cold. Their vocal unification is anything but.

The sisterly duo’s July performance is featured in the latest Sofar Sounds Omaha video. If bold minor chords and subtle keyboard set a tearful mood, the Hottmans’ voices offer warmth and hope to a relationship seemingly hindered by external forces. Their robust, glowing harmonies promise change and resolution, even if distant.

Watch The Hottman Sisters’ intimate backyard performance of “Our Home” below:

Check out “The Beast In Its Tracks,” the lead track from Songs To Drive By:

The weekend is packed with album releases and shows galore. Here’s the quick rundown:

Tonight, Omaha indie rock quartet Gramps releases its self-titled EP at O’Leaver’s with Millions of Boys and Uh Oh. Check out the Love Drunk video below, in which frontman Django Greenblat-Seay turns the camera on himself. RSVP to the show here.

Commander Kilroy releases its new EP Howl At The Moon at Bob’s Tavern Saturday. Stonebelly will play an acoustic set, and Verses & the Vices also opens. RSVP to the free show here.

For the rest of the weekend menu, head to our statewide calendar. If you do not see your show or one you plan to attend, email us at news@hearnebraska.org or add it yourself using the Contribute button. Also, be sure to hit us up on social media via @hearnebraska with photos and comments. See you out there.