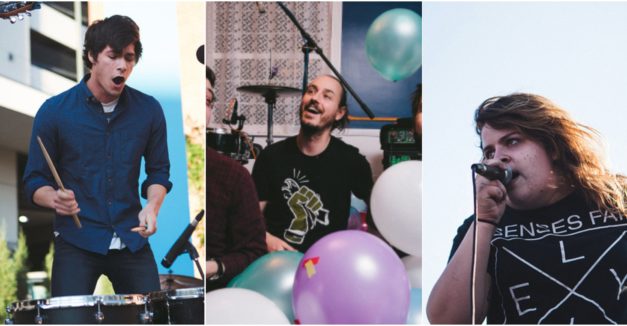 The Bourbon hosts two-night ‘Back to School Banger’

School is back in session and The Bourbon is celebrating with back-to-back nights of free local music.

In the back-to-school spirit, Better Friend vocalist Meghan Munyon, Walk By Sea drummer Brandon Ramos and Freakabout drummer Ian Francis tell us their most embarrassing classroom mishaps. Read their tales of rejection, mistaken-identity and one’s own loudmouth below:

One of my best school stories happened when I was in preschool at the age of three. I went to a private Christian school and it was a sort of “bring your parents to school” type of day. So, my parents come to school with me and it’s finally time to introduce them to the class. In front of the pastor, my teacher, my preschool classmates and their parents, I describe my dad in the following way: “My dad drinks A LOT of beer and smokes A LOT of cigarettes!” Saying it once was bad enough, but I repeated it about 25 times. I don’t think I had ever seen my dad drink a beer at that point. Needless to say, the staff was shocked and I got pretty much kicked out of the school after 1st grade.

“My initial thoughts of her weren’t much, but for the most part she was cute. She usually had her brunette hair up and curled. The outfits she wore were dresses most of the time. She was my type. We met in school. But what were my intentions? I probably just wanted to say “Hi,” and see what happened from there. The first time I had my chance I introduced myself to her. I must have been overly excited at the time. As I approached her, I blurted out “Hi, I like you!” As if my nerves didn’t already get the best of me, I followed-up with a bear hug. In hindsight, I don’t think it was the smartest thing to do since it was my first time meeting her. But love — or whatever you want to call it — makes you do silly things sometimes, right? All I wanted to do tell this girl was that she was special.

I thought she would feel the same. Instead, she glared at me with shock and disgust and pushed me to the ground. As I fell to the ground, I wondered, “Where have I gone wrong? Is it my looks? Is it my haircut?” All of these thoughts rushed through my head. In that moment I felt embarrassed and defeated. I thought it was over. To assure you, it wasn’t, because as I hit the ground, she followed up the push by grabbing sand and dirt from the ground and she lodged it right into my mouth.

That was it. Lying on my back, heartbroken with a mouth full of dirt, I couldn’t help but weep. You see, this was big for me, but it was ruined and I thought it was the end. I don’t get why I put it all on the line then and there. It felt right, and I was punished for it. But what did I know? I was just in preschool, and the playground was a harsh place.”

I’ve had my fair share of embarrassing moments throughout my life, however, the one that sticks out above all others is definitely the time I was detained in a crowded hallway for fitting the description of a sex offender. One day between classes I ran into Burnett Hall to use the bathroom about ten minutes after some kid decided to sneak in a little alone time when he was not so alone. I came out of the bathroom to several officers waiting to pull me to the side of the hallway for one of the witnesses to identify and got to stand there while dozens of students walked past. When the witness finally showed up, it turned out that it wasn’t me all along. To clarify to anyone who may recognize me in the future, I wrote a letter to the Daily Nebraskan which I titled: “For the record, that was not my penis in Burnett Hall.” Unfortunately, it only appeared online and they didn’t include the title. For several months after the incident, people I had never met would make references to me about the article while I was bartending downtown. I’m still not sure how I feel about the fact that one of my greater academic accomplishments was a one page dick joke in the school newspaper.

Haunted Gauntlet on The Basement on a Hill podcast

Producer/artist Adam Robert Haug (aka Haunted Gauntlet) went creepy this week, appearing on Episode 26 of The Basement on a Hill podcast. In a couple hours, they cover Maha Music Festival, Krampus and Haug plays Seven Deadly Questions. Plus, there’s the horror news update.

Listen to Episode 26 below, and catch up with the series here.