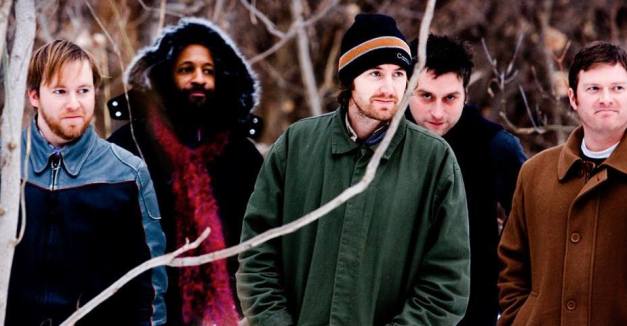 The Omaha alternative rock band flirted with breaking into the national spotlight during its four-year career in from 1994 to 1998. The single “Shine All the Time,” from a self-titled EP, garnered hours of play on local radio stations, like The River, then Sweet 98 and Z-92, at a time when those radio stations rarely looked to put local music in the rotation.

The band’s EP sold 20,000 copies in the Omaha area. Marq Manner, who works at Homer’s record store in Omaha’s Old Market, says that after the band broke up, EPs were so scarce he could sell one for $100 if it came in.

Blue Moon Ghetto reconvened at The Music Box in 2003 for three nights and sold out each performance to 1500 people.

According to Sokol’s website, Blue Moon Ghetto hopes this week’s reunion will be the beginning of more shows for the band.

Tickets are $15 in advance. RSVP here.

Announced earlier this week, Neva Dinova will get back to it on Dec. 23, for a show at Slowdown with Outlaw Con Bandana, Twinsmith and Both.

Neva Dinova has been on the back burner recently with frontman Jake Bellows’ solo work at the fore. Last year, he release the full-length New Ocean on Saddle Creek. The last Neva Dinova release came in 2008 with You May Already Be Dreaming. The band has not played a show since 2009.

HN is compiling a retrospective on the life of Sean Benjamin, an influential Lincoln guitarist who passed away last week.

We want to include stories from as many people who knew him as possible. If you knew Sean in any capacity and have a memory or an anecdote that you feel exemplifies who he was and why he was such a significant figure in Lincoln’s music community, please share with us.

Cold War Kids will return to Omaha’s Slowdown on Jan. 22, in what’s become a hyper-regular tour stop for the indie rock band, including three times through Nebraska last year. During its indie rock ascendence in the mid-2000s the band became known for anthemic — but strikingly layered — rock songs, like “Hang Me Up To Dry” and “Hospital Beds.”

Cold War Kids’ current state of industry purgatory is an odd one, and one we haven’t seen a lot of successful ‘00s indie acts go through yet. They’re down two original and longtime members, have explored more bombastic pop sounds in recent years and have toured constantly. It’s one approach or outcome from what Steve Hyden writes about terrifically in this exploration of ‘00s “blog rock.”

Essentially, they’re a band with a few very good songs (all at least 5-7 years old), no real perceptible sense of place (Long Beach, according to Wikipedia) and a ton of work ethic. Oh, and one of the all-time great band names that doesn’t really fit the band.