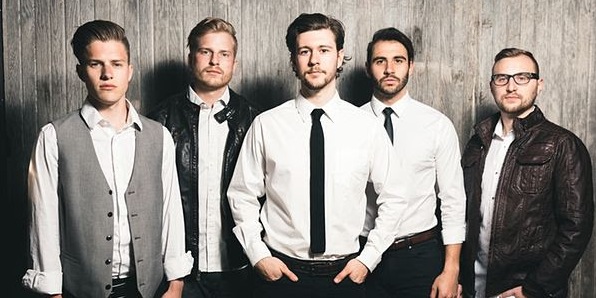 Loss, love, happiness and purpose are the plurality of themes rooted in Bernardus’ “Sleepy Eyed Thoughts.”

The song, which debuts today via HN, possesses a deep, warmhearted lyricism mirrored by the group’s ability to create a clean, unique string arrangement. Lyrics that say “I’ve been wandering in the dark for the light that you hold, now my sleepy eyed thoughts are clear,” exemplify an emotional turbulence that has reached a climactic, clear-eyed conclusion.

Solo musicians in their own right, brothers Ben and Jake Kramer have both lent their talents to local bands between playing private gigs and weddings. Ben plays the keys in Evan Bartels and the Stoney Lonesomes, and Jake had juggled the guitar, fiddle and mandolin — like he does in Bernardus — in Dylan Bloom Band up until recently.

Ben’s lead vocals and Jake’s multi-instrumental talents are the foreground of Bernardus, their vision complemented by drummer Adam Kovar, bassist Matt Cornell and keyboard player Christian Hale. In January, the group got their hands on a PA system and Bernardus was born in an old bunkhouse in Northern Nebraska.

“We had no wifi, no cell phones, and barely any electricity,” Ben said. We were able to focus solely on music and what emerged was an EP that is unlike any project I’ve ever been a part of.”

In its self-titled debut, Bernardus explores a multitude of harmonies and pairing of string instruments in the Americana vein of Mumford and Sons and The Lumineers. The Lincoln five-piece plays its EP release show Friday in the Railyard with The Wildwoods and Evan Bartels and the Stoney Lonesomes. RSVP here.

Listen to “Sleepy Eyed Thoughts” below:

When it comes to odd thematic and environmental schisms, leave it to I Forgot To Love My Father.

Sofar Sounds Omaha releases “The Country Boy’s Love Tune” today, shot during the Lincoln band’s October 26 living room performance. Frontman (and former HN intern) JP Davis appears first, face painted white, eyes blacked out like Gene Simmons. He growls as if to foreground the demonic, only to sleepily drift into a romp of a country ballad.

Omaha musician and videographer Ben Baldwin dropped a pair of Stairwell Sessions videos this week. First, Lincoln folk group Jack Hotel graced the stairs with “Iron Bell,” a new track not on its forthcoming LP Voices From The Moon (which the band releases next Friday at Zoo Bar).

Watch both videos below:

Tonight, a pair of touring Oklahoma bands in Keeper and Wallclouds play Lincoln’s SP CE Commons, 1239 S 14th St, with local support from Once A Pawn, Mad Dog & the 20/20s and The Way Out. Entry is by suggested donation of $5. The event is drug and alcohol free. RSVP here.

Also tonight, Possessed By Paul James plays The Bourbon, 1415 O Street. Multi-instrumentalist Konrad Wert is a thrilling one man show. Online roots music publication No Depression calls him one of “the 20 most important singer/songwriters of our time.” Laughing Falcon frontman Kevin Chasek opens the show with an acoustic set. The front room show starts at 9 p.m. Entry is $12. RSVP here.

For a fuller listing of this week’s shows, head to our statewide calendar here. Share news tips, story ideas and upcoming events via email at news@hearnebraska.org.