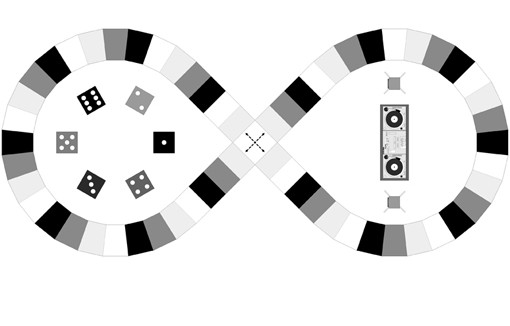 As part of its focus on programming that relates to current events, Omaha’s Bemis Center for Contemporary Arts has curated an interactive, installation that aims to facilitate direct interaction with its patrons. It’s looking for local personalities to help.

New York-based artist Derrick Adams is bringing his Crossroad radio station exhibit to Omaha’s Bemis Center, and will helm the board-game-like installation for the first month of its residency. Adams and Bemis Center creative director Nicole Caruth are calling for local deejays to take his place beginning in March.

Crossroads began simply as a radio station exhibit in Newark, New Jersey, but with the added touch of being a physical space that enveloped viewers. He used a streaming service to broadcast the show, which drew listeners from all over the world through publicity, but also attracted patrons to the exhibit.

The third iteration of Adams’ exhibit, the one he’ll unveil Feb. 4, incorporates a game structure into the mix. An infinity-loop track — inspired by Adams’ research into American railroad history — guides patrons as they walk around it musical-chairs style. When the deejay stops the music, each patron will be asked a question that corresponds with the space they land on. Topics include American History, “Lie or Truth,” Pop Trivia and a pause space.

photo of Derrick Adams via courtesy

As part of the process, Adams focused research in part on Omaha itself, asking longtime residents to pitch in questions or anecdotes that could be used for the game.

“In some ways, the game is asking what is important to who in terms of history,” Caruth says.

The idea is to facilitate an idea and cultural exchange through a familiar structure — in this case, a game. Adams says that once rules and guidelines are in place, it allows patrons to relax and focus on interaction with the piece and each other.

“Some people will be very focused on the competitive part, and that’s not really the objective,” Adams says. “It’s more about people coming together to find the game structure as a part of social engagement.”

Throughout his work with the ever-evolving Crossroads radio station exhibit, he has found that allowing (even urging) the artgoer to physically touch the space allows them to relax and facilitates an exchange of ideas. The exhibit itself symbolizes this, as the tracks cross each other continuously.

They’ll also be able to watch themselves playing the game. Caruth says one side of the gallery will have television screens set up, piping in feed from cameras capturing the action. Adams hinted at this as well, explaining that part of his research was focused on television gaming culture with shows like Family Feud.

“We’re increasingly aware of the fact that we’re on camera, and how we interact with others,” Caruth says.

With so many stimulating sensory aspects of the exhibit, Adams is just hoping people find a new way to interact with art and learn something new, whether through interaction or the game itself. And he expects it to evolve along the way.

“When you’re a kid, you make up games and from that, you gain new friendships and new alliances with people and a new understanding of the way other people think and navigate through certain aspects of life.” Adams says. “It’s really more of an icebreaking project/installation that can take so many different forms with different types of information.”

As far as deejaying is concerned, Adams is looking for someone interested in different types of music who is also flexible, goes with the flow and can interact with different types of people. Each deejay will contribute an artist-approved playlist, which will also be broadcast via SHOUTcast and archived online.

Somewhat of a game-show host, if you will, but one who doesn’t take themselves or the game too seriously.

“There’s no need to have an overly competitive focus,” Adams says. “For me it’s someone who’s interested in being a part of the conversation and collective project.”

The application deadline is March 25. Email JoAnna LeFlore (joanna@bemiscenter.org) for more information and an application.

Tonight, Pageturners Lounge hosts a mini songwriter showcase with Anna McClellan, Drew Dietle and Sutter Zachman. California native Zachman has been active the last two years, drawing attention from BBC and Rolling Stone for 2014 EP Repeat Offender. This after his early entry to the music industry a decade ago as one half of the U.S. Mail Band, from which he exited early after experiencing nerve damage. He released Fireworks! in August 2015. RSVP to the free show here.

Omaha’s Those Far Out Arrows plays Duffy’s Tavern tonight with The Morbs and Domestica. RSVP to the 9 p.m. show here.