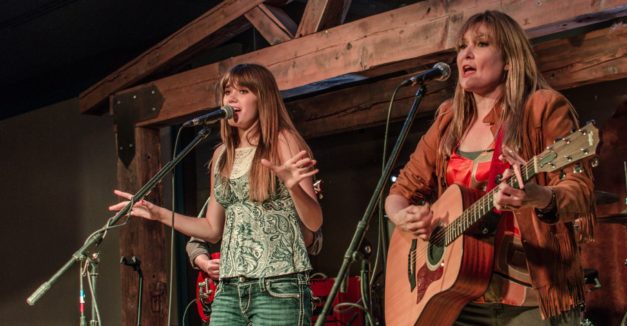 It’s an understandable reaction to guard one’s heart at the end of a crumbling relationship. But even entertaining future love pursuits, as Kelli Jones sings in the latest Belles & Whistles release, represents a sliver of optimism.

The Omaha country duo released the lyric video for new song “Break Itself” over the weekend. It features the mother-daughter act’s signature harmonies, guiding the track through earnest, lovelorn songwriting.

Belles & Whistles has taken great leaps over the last few years, garnering national country radio play and recently cutting a handful of demos in Nashville this past winter. The duo plays the Aug. 5 Sidney stop on this year’s Good Living Tour with Sam Ayer & The Love Affair, Matthew Scott and Aspen County. RSVP to the free, all-ages show here.

Watch the video for “Break Itself” below:

Omaha (the band) headlines Down Under Lounge art-music showcase

The Down Under Lounge is bringing together local musicians and local artists for an all-day event this weekend.

The first edition of Art Down Under happens Saturday, July 23, a day which will feature local artists’ work hosted and curated by Omaha artist Hugo Novelo. Ten local artists will display their work starting at 3 p.m., with acoustic music from 3-7 p.m. Americana band Omaha anchors the evening slate of full-band music, which also features Ojai and Tiny Monsters. The event is free, RSVP here.

To preview the show, Topher Booth and Matthew Jones (both of OMAHA, the band) performed the song “Painted Grace” against a backdrop comprising many of the works you’ll see Saturday. Watch their video below:

Recycled Sounds has a birthday coming up, and owner Stuart Kolnick is celebrating with a sale.

The long-time record store, now in Omaha at 322 N 76th St, turns 24 at the end of the week, so from July 22-27, there are discounts all over the store. Local records are 10-percent off, CDs and cassettes are 24-percent off and there are plenty of other discounts on LPs. Kolnick will also give away a $20 gift certificate each day.

Kolnick is still settling into the new shop, following the store’s April move to from its downtown Lincoln location. Thus the festivities this year a low-key, but still rewarding of its customers.