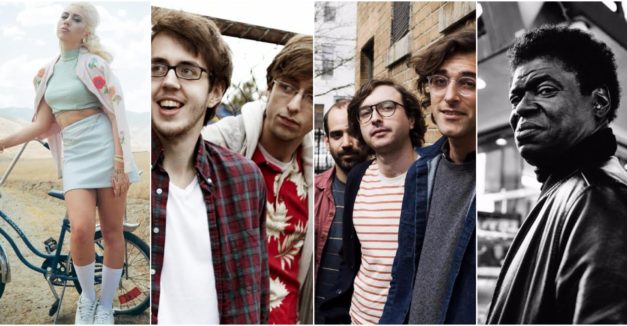 Less than two months away, Lincoln Calling has revealed the day-by-day artist breakdown for all three festival days.

There are already a few noticeable threads running throughout each evening. Thursday night has a handful of singer/songwriters in Esmé Patterson, Simon Joyner, David Dondero, The Lawrence Arms’ Brendan Kelly and Arliss Nancy’s Cory Call. There’s plenty of indie and heavier rock Friday, but don’t sleep on Allan Kingdom and Both or Plack Blague’s showcase. And note Josh Hoyer & Soul Colossal and High Up in the same building as Charles Bradley.

Lincoln Calling will pack nearly 120 artists into eight venues in downtown Lincoln, including Bodega’s, The Bourbon, Zoo Bar, Vega, The Bay, Tower Square and both inside and outside Duffy’s Tavern. The complete schedule will be released in the coming weeks, so stay tuned. Tickets are available for $49 here.

Lincoln Calling is also giving away a pair of festival passes. To enter, share this post prior to Sunday, Aug 21. We’ll draw a winner at random at 9 p.m. that day.

Below the poster, see the festival breakdown by venue:

The Good Life isn’t quite ready to call it a year.

The Tim Kasher-led indie rock band announced today it will tour throughout November with former Neva Dinova frontman Jake Bellows, hitting mostly Midwest and East Coast cities in two and a half weeks. No Nebraska dates, as the band has hit Omaha (twice), Grand Island, Kearney and Ord, Neb. (for The Good Living Tour) in the last year.

In addition, The Good Life shared “The Modern Mary,” an outtake from last year’s album Everybody’s Coming Down, via Brooklyn Vegan. It begins with a folky stomp and picked-out chords, building into a driving, echoing lament of lovers as false-saviors.

Listen to the track and see full-tour dates (including a few with Field Mouse) below:

As KZUM approaches its final fund drive of the year, the Lincoln community radio station has announced a benefit concert to kick it all off.

The concert precedes KZUM’s Fall Fund Drive Sept 6-13, during which it will make its final push for this year’s $300,000 fundraising goal, a total it must hit to continue qualifying for government funding from the Corporation for Public Broadcasting. The federal grant program supports nonprofit community radio stations by way of a donation-matching system, raising its baseline mark to $300,000 this year.

Hitting that mark by Sept 30 would not only mean a record fundraising year for KZUM, it would also secure CPB funding through 2020. Current projections show the station at $272,000 in grants and private donations, though staff is optimistic that the concert and fund drive will help reach its goals.

“We have been working diligently the past year on building KZUM’s visibility in and around Lincoln, all the while building new relationships and supporting so many different facets of our community,” said Shannon Claire, KZUM development director and concert organizer. “This event is intended to not only raise funds so we can continue that work, but also to celebrate the history and dedication this station has to its community.”

Along with proceeds from a silent auction and raffle prizes, all ticket sales will benefit KZUM’s push to reach its fundraising goal. General admission tickets are $20. Find them here. A limited number of VIP tickets are available for purchase at KZUM’s business office, 3534 S. 48th St., Suite 6, in Lincoln.

Tonight, Conor Oberst kicks off a handful of tour dates in Grand Island, playing a free show in the heart of downtown at 309 N Pine St. Shortly after announcing the tour, Oberst revealed the title and tracklisting for a new solo album Ruminations, out Oct 14 on Nonesuch Records. If you’re interested in what two people think the album will sound like, and which direction Oberst is heading after a turbulent 2015, read the email exchange we published earlier in the week here. McCarthy Trenching, Miwi La Lupa and Phil Schaffart open the 7:30 p.m. show. Though it’s a free show, local promoter Knife and Fork Productions asks that you RSVP here.

Find a fuller schedule at hearnebraska.org/events. If you do not see your show or one you plan to attend, leave it in the comments or add it yourself via our contribute feature here. Send news tips and story idea to news@hearnebraska.org.