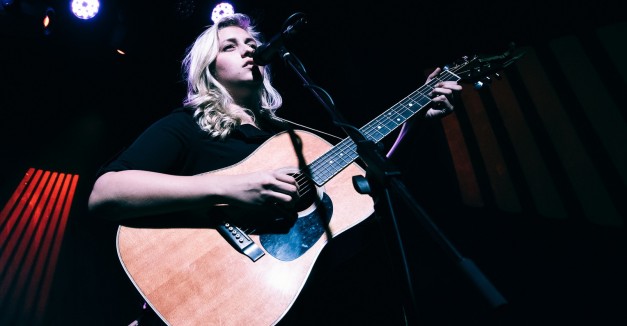 Weeks in the national spotlight have given way to local success for one Lincoln singer/songwriter.

The singer/songwriter was featured by NPR Music during its Tiny Desk Concert Contest, which praised her video in its blog during open entry and again in its Top 10 list after announcing the winner. The two sides had been in talks since last summer, however, neither party attributing the Tiny Desk success to the signing.

Von Kampen contacted Semrad last Spring, interested in playing at the second Nebraska Folk & Roots Festival. They kept in touch when that didn’t fall into place, while Von Kampen released an EP and played concerts regionally.

“Both Mike and Gunter seemed like genuine people who were excited about what I was doing,” Von Kampen says. “I knew they would be able to help me become more involved with the Nebraska music community and the Midwest in general.”

“She certainly has all the pieces,” Semrad says. “She’s a great storyteller, amazing performer. She just gets it.”

Recent Sower Records developments make the signing a potential boost not only for von Kampen, but for its entire stable as well. Semrad says the label is working on distribution with a few different national companies as record sales continue to grow. The label is also working with a publicity company to get national radio airplay.

The signing is another strong move for Sower Records in what looks to be a busy year. It released McCarthy Trenching’s More Like It last November, and will release records by Evan Bartels, Matt Cox, Jack Hotel, Semrad, Gerardo Meza Band and Southpaw Bluegrass. It will also release special recordings by Strawberry Burns in honor of bassist/vocalist Pat Clinch, who passed away last May.

One Percent Productions has announced a slew of concerts over the last 24 hours, including one heavy-hitting hip-hop act.

Tyler The Creator will play Omaha’s Sokol Auditorium Sunday, June 5. The California native and Odd Future co-founder embarks on a nationwide tour in May which will end at Bonnaroo Music Festival June 10. Born Tyler Gregory Okonma, the rapper has been somewhat embattled amidst his success. He burst onto the scene in late 2009 with the Bastard mixtape, and has cut three studio albums since. Cherry Bomb, the latest, was released last year to somewhat favorable reviews, and features Schoolboy Q, Charlie Wilson, Kali Uchis, Kanye West, Lil’ Wayne and Pharrell Williams. Okonma has simultaneously drawn criticism due to perceived homophobia and depictions of violence against women in his music and self-produced videos. Tickets to the show go on sale April 1, and are $30. RSVP here.

Tonight, Athens, Ga., band New Madrid plays O’Leaver’s. The indie rock quartet has a new album, magnetkingmagnetqueen, due out next month on Normaltown Records. Joining the bill are New Orleans band Motel Radio and Omaha acts Sean Pratt and the Sweats and Sam Martin. RSVP to the 9 p.m. show here.

Also tonight, Oklahoma duo Skating Polly plays Vega. Multi-instrumentalists Kelli Mayo and Peyton Bighorse formed the band after their parents met and moved in together. Mayo and Bighorse’s poetic lyrics, melodic arrangements, rudimentary musicianship and eclectic array of songs vary in style from riot grrrl to piano-based indie pop. The Way Out and The Clocks open the show. Get more information and buy tickets here.