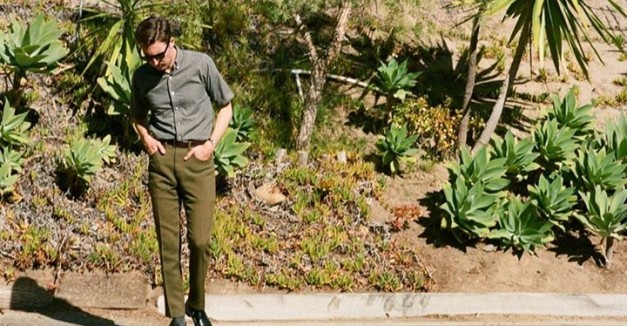 Nick Waterhouse’s art springs from a simple idea: everybody wants to be somebody else. One of his heroes, Van Morrison, got his start covering Bobby Bland, whose own musical idol was Nat “King” Cole. In Waterhouse’s view, emulation is a journey; you never truly succeed, but as the singer, guitarist and songwriter puts it, “You become something on the way there.”
Nick was born in 1986 and grew up in Huntington Beach, a place known predominantly for its tanning salons, commercial surf culture, and UFC fighters. In his early teens, he established his musical sensibilities in the midst of the burgeoning Southern California DIY scene (Burger Records, Ty Segall, McHugh’s Distillery studio), through which he refined his own idiosyncratic perspective on the spirit of American Rhythm & Blues and Rock & Roll.
Waterhouse started performing as a teenager. “It was really motivated by fear,” he recalls. “I’m kind of an introvert, so it was an uncomfortable situation. It was a way to force a crisis.” The young artist experienced an exhilaration he’d never felt before, and hasn’t found anywhere else since. “It’s a feeling of heightened awareness that goes beyond pleasure,” Waterhouse explains. “It has something to do with seeing ahead in time and behind in time all at once. You don’t just get the immediate reward; you get the potential that rewards you the same way.”
Waterhouse explored the idea of potential on his breakthrough single, “Some Place,” a beautifully lean, propulsive track recorded at all-analog studio the Distillery and self-released in 2010 on his own Pres label. “Well, there’s someplace that I’d rather be,” Waterhouse sang in a fierce yet plaintive register. “And it’s something that’s been on my mind almost constantly.”
These days, Waterhouse is a successful recording artist, with one well-received LP and and several high-profile tours and collaborations to his name. But his latest work still embodies the struggle of his early forays. During “This Is a Game,” Waterhouse sets up a snarly, post-surf guitar solo with a succinct statement of a cynical outlook: “This is a game / Please remember my words / And don’t get upset when you don’t get what you think you deserve.” And on the gothic-soul strut “Let It Come Down,” he meditates on the inevitability of pain. “If there’s gonna be rain tonight,” he sings in a stoic croon. “Let it come down.”
It’s clear from this material that Waterhouse is in the midst of his own becoming. He isn’t the type to let ecstasy take over, like Van Morrison, or to drawl away in a consummately laid-back register, like Mose Allison. In the tension between his wry lyrics and crisp arrangements, you hear the expression of a worldly skeptic who’s also—when it comes to his art—a sanctified believer. Whoever it was that Nick Waterhouse wanted to be matters less now; these days, he just sounds like himself.