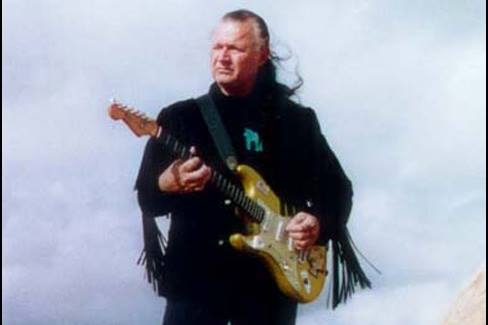 Dick Dale an avid surfer was born in Boston Massachusetts in 1937, moved to California 1954 with his parents and great expectations for a bright future. As a kid he had taught himself to play the drums listening to Gene Krupa. Dale bought his first ukulele, being left handed and drumming to the beat of Gene Krupa he began strumming left-handed upside down and backwards to a Gene Krupa beat.
Dale also loved the genius and playing of Les Paul and the vocals of Mary Ford.
Dale also became excited watching his uncle playing the legendary song Misirlou on an Oud instrument.
Dale then learned to play Misirlou on his guitar.
He pioneered an entire genre of American music with his unique style of staccato picking and reverb-drenched sound, which earned him the title as “King of the Surf Guitar” by his surfer buddies.
“Dick Dale and the Del-Tones” Re-opened the Famed Rendezvous Ballroom in Balboa California and became the star attraction playing nightly to thousands of screaming teenagers.
Dick Dale served as co-designer to Leo Fender and helped create and build the super-powered electronics and equipment that would revolutionize musical instruments and the live and recorded sounds in the 50’s & 60’s.
Over a vast career of 50 years, he has received an extensive number of Lifetime awards and nominated for a Grammy for the music in “Back To The Beach”.
He’s been inducted into the Surfing Hall of Fame in San Diego, Hollywood Rock of Fame, White House Congressional Hall of Records, and First Presidential Historical Society as a Lifetime Member and voted by over 100,000 members of his peers into Nashville’s Musicians Rock n Roll Hall of Fame Museum.
Dale has been featured as Huntington Beach’s Grand Marshal, Featured at the yearly NAMM Convention, in countless movies, television, commercials, magazines, newspapers, grand openings and voted the number 1 top concert out of 500 concerts and bands in Madrid Spain.
To mention all of Dale’s accomplishments in a short Bio would be a Titanic effort. But the Title, “Dick Dale King of the Surf Guitar,” will be forever be known as the man behind the epic instrumental “Misirlou” from Pulp Fiction and most recently with The Black Eyed Peas Platinum Cd “Pump It”.
Dick Dale is still playing strong as ever and going out on tours with his own band and his prodigy son Jimmy Dale promoting their latest creations the Dick Dale Signature Fender Malibu Acoustic Electric guitar and the Jimmy Dale Signature Fender Kingman Acoustic Electric guitar.
Looming over the 710 Fwy and the Dodger Stadium, Dick can be seen on a full size Dodgertown Billboard featuring a picture of him with his guitar and the statement “This is my town”!