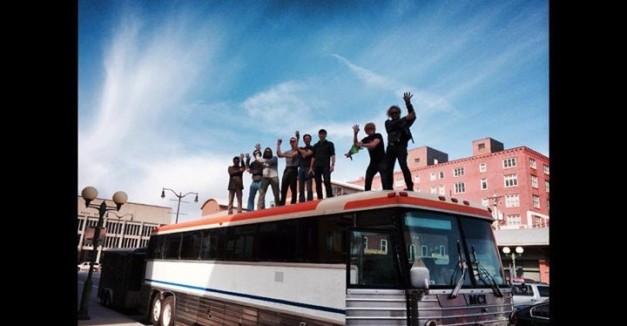 "Lincoln’s Universe Contest is a spastic indie rock band that has been threatening to break out into a full-scale indie music phenomenon for the last year. The question is more when will it happen rather than if it will. The band perfects theatricality in their live sets, while still delivering melodic precision. Modest Mouse is the usual comparison thrown Universe Contest’s way but there’s elements of the last decade’s best, messy indie pop acts in here. If you’re already inclined to liking acts like Tapes N Tapes or the Dismemberment Plan, you’ll find lots to like in Universe Contest." - Tim McMahan, Omaha Reader

" The search for the 'next big thing' is a frustrating exercise as old as rock music itself. Who will 'break through' to the 'next level' and make a 'big splash' on the national scene? Molded in a prog rock sound reminiscent of early Modest Mouse- and driven by a rabid fan base emanating from the Star City- Universe Contest is poised to be the next big thing. Let's leave it at that." - www.hearnebraska.org

“Arthur Mauseth designed and built a light rig to fit the Duffy’s stage and then cranked up the most impressive club light show I’ve seen since the Flaming Lips rolled through a decade ago. And the lights were perfectly fitted to UC’s post-modern rock which can be delicate and thundering, anthemic, herky jerky and melodic -- sometimes all in one song.” - L Kent Wolgamott, Lincoln Journal Star

"The quintet of guitarists/vocalists Tim Carr and Joe Humpal, drummer Brenton Neville, bassist Jon Dell and keyboardist John Freidel donned their halloween costumes early, called all their friends and put on what I’m calling the best rock ‘n’ roll show Lincoln has hosted in five years. Yeah, I said it. Where to begin?

Their show was that music, plus some incredible new songs, played with well more volume and passion than the small, dank stage at Duffy’s really merited. And that’s not a jab at Duffy’s. Universe Contest just made the small room look microscopic in comparison. They were every sound in a crowded bar. Every sight. Every smell as well — that room reeked. But the room had more than just a tinman, a caveman, Santa and a couple of interstate hookers in it. It had Lincoln in it.

I can’t recall it ever being that hard to get to the front of the stage at Duffy’s. That’s usually the most vacant spot in the house, but people were literally clawing and punching to get closer to this band. This local band. This Lincoln band. And I can’t recall ever seeing that for any band Lincoln has spawned in the last five years. And a capacity crowd came to participate in it. As many Lincolnites as could see it, saw it. And as many who saw it, loved it — blood, bruises and all.

Universe Contest is the sum total of everything the Lincoln music scene has to offer. They draw a crowd like no other band in town, and unlike some of the other big Lincoln acts, people actually participate. We sing along, we dance, we flirt and fight and fuck and smile to this music, because it’s not only catchy and anthemic and loud, but it speaks to us. And it is ours. It is Lincoln’s, and hopefully soon, it can belong to the world."

"My biggest discovery Friday was Universe Contest, who were captivating and entertaining at the Bourbon Theatre's Rye Room. I don't have a quick, clever description of the music -- it's kinda poppy, then would shift into some serious rock and sprawl into guitarland. Whatever you call it, I liked it a lot and the band is relatively new -- with great promise. Best new band I have seen in a long time. Exciting-interesting-sonically explosive." L. Kent Wolgamott, Lincoln Journal Star

"The best new find of the night was at The Bourbon Theater Rye Room where Universe Contest was playing. The band (which I am told are former members of Gooses) were exciting, interesting and explosive sonically. They were appealing and catchy though they did not color within any lines or play nicely with the formula for current indie music that has been thoroughly mapped out. This was one of those moments where people were crawling over each other to see the band play with a ferocious energy only to drop down to more somber moments at the stop of a drumstick. I had to climb up some stairs (also full of people) and hold on to a bar with one hand just to catch glimpses of the group. I have listened to their album online three times today (winners.bandcamp.com/) and this is one of the most interesting and exciting bands I have heard out of the area in a long time. I would travel to Lincoln again just to see them, though I hope we will be seeing many more Omaha appearances in the future." - Marq Manner, Shout! Magazine

"Universe Contest’s demo is all I’ve had blaring in my car for the last two weeks, and I came prepared to hear something special. That’s what I got. With frontman Tim Carr screaming his grievances to the crowd and the spectacularly talented rest of the band backing him up with top-class playing and a fair amount of soaring vocal harmony, I had a lot to smile at. They packed the Bourbon, and I had fun." Casey Welch, The Daily Nebraskan


Universe Contest's rapidly growing regional
popularity is fueled by a unique, engaging stage show coupled with a
solid arsenal of songs. The band formed in late 2010 and began
playing a regular regional schedule in the fall of 2011 after they
released their first full length album. They have been described as
Modest Mouse + MGMT + Detachment Kit, however, do not mistake Universe Contest as another copy cat band evolving out of the darks depths of the indie music scene. Universe Contest has a strict mantra, practice hard, stay on the road as often as possible, and give away your music whenever there is a demand. Look for a new EP spring 2012.