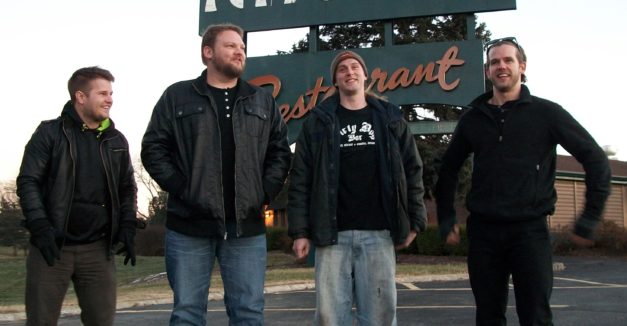 The Hanyaks (hänyäks) is a four-piece rock band based in Lincoln, Nebraska. Consisting of Ashley Sharp on bass, Robert Klingsporn on guitar, and Nolan Morten on drums, front man/chief songwriter Monte Peck assembled this sonically schizophrenic group after moving to Lincoln from Austin, TX.

With a heavy rhythm section, soaring vocals, and wall-of-sound guitars, Monte Peck and The Hanyaks appear be a modern yet even cross of Led Zeppelin and Weezer. But during songs like Waitin’ On Linze (The Breakdown) and Cut You Loose (Social Candy), the undeniable Texas blues and outlaw-country influence of Waylon Jennings and Rodney Crowell shine through showcasing a genuine diversity seldom found within your typical rock band. Hold on… there’s more… they don’t stop there. On other tunes such as R (The Breakdown) and Exbestfriend (Like A Parthian Shot), they shift gears again effortlessly; their sound and lyrics become dark, moody, and deeply confessional not unlike that of The Smashing Pumpkins or Stone Temple Pilots.

Their debut album, The Breakdown, was released February 3, 2009 – the fiftieth anniversary of the fatal plane crash that took the lives of Buddy Holly, Ritchie Valens, and the Big Bopper. It has been described as a “surprisingly cohesive and comprehensive exploration of Peck’s influences as a songwriter.’

Sophomore effort, Like A Parthian Shot, “a thoughtful, no apologies, in-your-face rock record”, was released May 18, 2010.  After the release, the band went on hiatus and Peck relocated to Nebraska.

On December 9, 2016, the band released their third full-length album, Social Candy. Tangibly, the album is available exclusively on candy bar shaped flash drives that include lyrics, pictures, videos, and a supplemental compilation album entitled, Raw Sugar. Preliminary releases also include The Breakdown and Like A Parthian Shot in HQ MP3 and can only be purchased directly from the band.