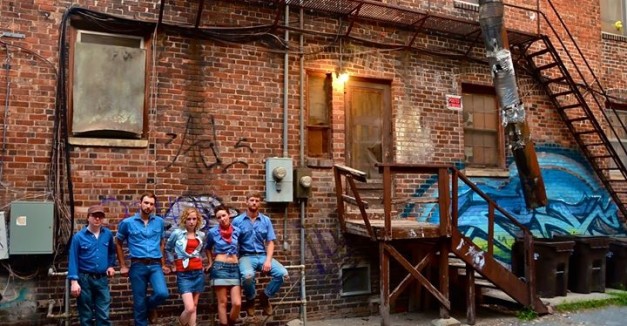 Album number two, Hold Me Tight, is available for your ear holes on iTunes and Spotify, and straight from the band! Thanks to our fans for all the support!

Jordan and Heather came together for the first time on stage at Duffy's Tavern. Jordan, the longest-running member of Ryan Head and The Bar Room Orchestra (this excludes Ryan himself) stood atop the old stage (the one on the south side) with viola in hand among the semicircle of eight or so musicians. Days earlier, Ryan Head stumbled across Heather (on the roof of an apartment building) singing "Waltz Across Texas" while clumsily strumming a guitar. Ryan Head asked Heather to sing a song or two, and then we find ourselves back in front of the stage at Duffy's. Mid-set, Ryan says, "Everyone, this is Heather. Heather, this is everyone."
Fast forward a couple years. Ryan Head and The Bar Room Orchestra find themselves in the throes of an indeterminably long hiatus. Late one night, Heather has an idea and quickly sends a textual message to Jordan that reads, "Dude. We should do a duet." Moments later, Jordan responds with, "Yes!! We can take that everywhere!" In yet another epiphany, it occurs to Heather that the band will be called The Betties. Days after that, Heather saw one of her heroes, Mr. Merle Haggard, live in concert. She knew that they would play country music, a genre she'd loved since before she can remember. The song "So, so long" kicked off a string of album-worthy originals. Now Betty Lou, of translucent skin, slight build and flaxen tresses (Jordan), and Betty Jean, the curvy brunette (Heather) adorn the stage with relative frequence, hoping to make you laugh, make you cry, make you love the idea of love, in all of its light and all of its sadness, if only for a little while.