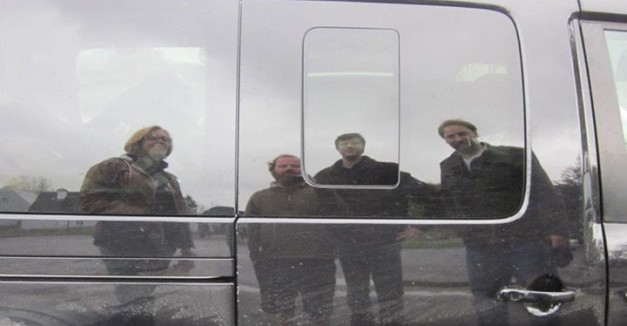 Midwest Dilemma’s recording Timelines & Tragedies was the winner of Album Of The Year at Omaha Entertainment Awards. You can listen and buy the album at http://www.midwestdilemma.com!

Meeting the Band: Exploring Midwest Dilemma's new album with 1/5 of the band's members

It was only 400 years in the making, but Justin Lamoureux and his band Midwest Dilemma are finally ready to release their debut album.

It’s not that confusing if you let me explain. The self-released record, aptly titled “Timelines & Tragedies,” might have had its share of setbacks from conception to the day it was pressed, but the result is a collection of 13 tracks that follow Lamoureux’s family history from the old world to the new, winding and rambling from 17th century Montreal through several generations to the cities that were born and bred along the banks of the Missouri.

Growing up in Sioux City, Iowa, Lamoureux, 31, came to the Omaha area at the age of 20 after his father took a railroad job in Omaha. Always interested in music, he spent his first few months in the area writing and recording songs at his parents’ Beaver Lake home with longtime friend Reagan Roeder. Both have since established themselves as key players in Omaha’s music scene.

As a songwriter, Lamoureux first braved the waters at a local open mike night (that Roeder started nearly a decade ago at the now closed Latte Lounge). Here, Lamoureux began honing his songwriting skills with other upstart musicians at the time, immersing himself in a musical community that also nurtured the likes of Sarah Benck, Kyle Harvey and Matt Whipkey, among others.

After this, Lamoureux began working with other musicians, starting a nameless, rock ‘n’ roll band which toured regionally. After the inevitable band fallout, the next few years saw Lamoureux continue to perform locally with several musicians, including a stint where he was backed by members of Vinnie Bronx.

It all adds up to the fact that Lamoureux is a man of unaltered conviction. He’s quick to acknowledge his own shortcomings while at the same time refusing to settle for anything less than what he knows is best for his music – it’s his vision that drives the current path of Midwest Dilemma.

When he talks, there’s a spark behind his eyes that’ll begin to glisten when he speaks of his songs, his band and the new album. Lamoureux is a stream, it doesn’t matter if for a time he is only trickling through rocks and soil, his conviction is the rainfall, pouring much needed force sustenance to the stream – it can’t be stopped. He will find his ocean; it’s inevitable.

The rest of Midwest Dilemma is along for the ride. To make the album, Lamoureux recruited a full-time band of around a dozen members – all of whom whole-heartedly back Lamoureux’s vision – with a total of 22 people recording on the actual disc. The project went through four local studios for multiple sessions of recording, rerecording, mixing and mastering. The resulting “Timelines & Tragedies” is a solid folk-based album with a natural ebb and flow of lush orchestration, complete with strings, brass, woodwinds and male/female vocal harmonies.

As I sat with Lamoureux and three of his band mates at Burke’s Pub in Benson, it soon became clear that I couldn’t ask Lamoureux a question without him answering it in full, elaborate detail – the mark of any thoughtful songwriter. This is how his music is as well, filled to the cusp with well penned, developed ideas that, through his band mates’ loyalty and passion, are realized.

If you want to know about him, just listen to his songs.

What does Midwest Dilemma mean?
(As the Who’s “Teenage Wasteland” starts to blare over the speakers.)
Justin: I sat there and I was thinking about the current situation in Omaha and just being this new band and thinking about all my songs and just something that was fitting for my situation of moving from a small town up in Sioux City and moving to Omaha and just feeling like (we’re) this new band and we’re trying to get out there a little bit, everything at that point, at least my thought process, was like a dilemma. I felt this inner struggle of trying to make the right decisions. Knowing should I go and pursue a career? Should I continue to try to play music? I didn’t really feel like I was that good and it was always just saying, “What am I doing?”

With all the lineup changes of Midwest Dilemma, how did you get to where are today?
Justin: Looking into some of the local talent, nobody could tour, and I just decided – I knew that my job was not that important to me and I wanted to get out … So I just started touring. It was just solo acoustic. One of the tours I went with Kyle Harvey, we did about a month and went down south and toured all over the place. I went out for a month with Nic. I had this orchestral thing in mind where I was really inspired by Sufjan Stevens and the Decemberists and Arcade Fire and bands like that, and it wasn’t even something that I wanted to be like them, it was “let’s start and see what happens.” So I met Liz and we started jamming.

How’d you two meet?
Liz: I run an open mike at Mick’s right down the street and Justin started coming in and I just admired his songwriting so much. I felt so emotionally connected with what he had to say and how he had to say it. I had been on a big hiatus from my instrument (clarinet) after my going into the classical world, playing in a symphony and being totally dissatisfied, and I wanted to write my own music.
Justin: At that time it was like this spark just happened. I’m not musically trained, so I would come and say, let’s make something sound like, (hums a melody), I’d do something like that and she would take it to that next level.

Your album, “Timelines & Tragedies,” is about your family’s history, right?
Justin: Yeah. The first track, “Montreal,” is going back to the 1600s. I was actually doing a lot of research, the day of the Internet makes it a lot easier, but I was looking for family trees. I actually found a book that a gal wrote about my last name...
(Handing me the album, pointing at the artwork inside the CD jacket)
Liz: These are all real pictures of his family. This is Justin with no pants, (Laughs) and his dad…
Nic: Pull the sleeve out, brother. It comes with a poster.

What do the rest of you guys think about the band?
Nic: Here’s how it works, man. Justin has a vision. Looking for what he wants, he goes through numerous players to find that sound. With the people that he’s found, whether he knew them or not, when he finds out what’s going to happen the way he wants it to, those are the people.
Jackie: (Justin) appreciates the human nature of musicianship, that there’s nobody that is a perfectly technical musician that never makes mistakes. There are mistakes in our shows and on our album, but it’s the human element that we love that he appreciates.
Nic: Miles Davis made mistakes, too.
Liz: I’ve played clarinet my whole life, and I’ve never enjoyed it as much as in the company of Midwest Dilemma.
Jackie: And I feel the same way. But I had taken off (playing flute for) over five years, I had just put my flute down and it was no big deal. But now that I’ve picked it back up, I’ve realized how important it is to have it, but that I have somebody appreciates my music.

After all the recording and re-recording, mixing and remixing, mastering and re-mastering – how do you think the record turned out?
Justin: It took a couple days and I didn’t listen to it and I just let it go. For me, now I’m just sitting back and enjoying the fact that we did this – it was a major accomplishment, and let’s get it out there and let’s work on some other stuff. This is a milestone. This is a major goal accomplishment. I feel like this is going to be able to open up a lot of doors.

Where do y’all work?
Justin: I’m able to freelance, so I’m working on some Web sites right now that are really helping out financially. That’s continuing to grow out of my home.
Jackie: I’m the operations director for an agency that supports people with developmental disabilities – there’s no money in it. (Laughs) It’s all about where your heart is.
Nic: I’m a tattoo artist by day and a male stripper by night. (Laughs)
Liz: No, he teaches lessons. We both work at Dietz. I’m an assistant manager. My (lessons) studio is a little small right now. I just don’t have time for it.
Nic: She’s mainly retail in musical instruments.
Liz: Oh yeah, I sell them trombones.