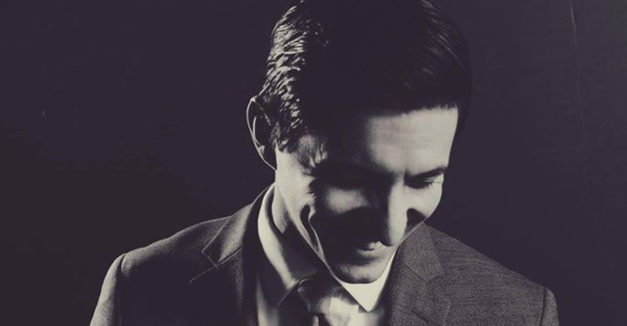 jtvrdik is the solo musical endeavor of Jonathan Tvrdik.

Jtvrdik is Jonathan Tvrdik. The full-length IRONS out now.

jtvrdik [Jay Tuh-VER-dik]
IRONS
In the post-postmodern world’s manic overcorrection of irony’s skidding tires, certain shifts in cultural output are pretty understandable: the rise of glossy, slick, car commercial anthemry, the reign of twee indiepop coated in a thick layer of vocal affectation and plucked ukulele strings, etc.
These, we are led to believe, are the sounds of “earnestness”—not the collective jingle of big box stores and dish soap advertisements, nor the tune created by marketing demographic labels to entire generations for the purpose of selling lifestyle brands and justifying the repeal of labor laws. No, we are told, these sounds, in combination, are the soundtrack of unabashed purity of heart, of a complete lack of guile, of a total sincerity that is, above all else, newly invented.
Meanwhile, on the Nebraska plains, a setting by turns unrelentingly balmy and remorselessly frigid, jtvrdik has crafted a bona fide masterpiece: a record whose honesty and ghosts of both eras and people loom as desolate, womblike, and paradoxical as the place itself.
Maybe because the album’s maker began with a vision of layering Frank Sinatra on electronic goth, IRONS embraces perceived binaries throughout, interlacing existential lament with primal, dance floor-bending percussion. The Sinatra influence is shadowy but there, in the use of vocals as an instrument, in the connective tissue that threads throughout the album’s range of emotions. But the sound spins into a mélange of synthpop, trip hop, and goth-tinged post-punk. Imagine a tonally rich rebirth of no wave, or electonica stripped of its trademark sterility.
In the fuzz-laden, overdriven buzz that pounds from the outset of opener “Something Better”, a Liquid Liquid-esque bass line from collaborator Joe Mickeliunas weaves effortlessly with synth that vaguely evokes the guitar tones of Johnny Marr and early Edge. “Barge Time Blues”, whose beat vacillates between carnival and dancehall, rests easily together with a New Order-tinged “Holiday Man.” Massive Attack’s Mezzanine era lurks subtly in the beats of “Crush”, while the vocal rhythms of “Come Undone” suggest the call and response of a church canticle.
The album will likely remind many of the glory days of labels like Factory and Wax Trax!, and the album does hearken back to dark, strobe-lit, and smoky bygone goth clubs of yore. But IRONS is far from a throwback in sound or content. Produced by jtvrdik and by Clark Baechle (a.k.a. Recordist, drummer for The Faint, Depressed Buttons, Bright Eyes), the album isn’t afraid to capture an uncomfortably contemporary meditation on impending natural disaster (“Hot Wires”), alongside a timelessly melodic ode to, and ruing of, nostalgia (“Morphine Trails”). The range of styles and subjects, unified by jtvrdik’s distinct sense of voice as an artist, light the way forward in a time of “earnest” veneer: set aside any fear of wearing influence on your sleeve; influence is unavoidable. Instead, just make the music that you want to hear.
The songwriting that results is never too pat, never too easy, but it’s also never willfully obscure, never coyly trying to convince listeners of its depth by substituting murk for complexity. IRONS is an album you feel like you’ve known your whole life without the songs ever sounding too familiar. IRONS isn’t obvious; it’s inevitable, while still managing to be full of surprises.
- Chris Harding Thornton