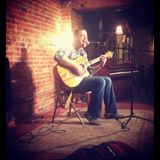 Jason Sitzman is a Singer/Songwriter based out of Lincoln, NE. Jason continues to perform his music in Lincoln and beyond. Music inspirations include Folk, Rock, Pop, Barbershop, Reggae, Blues, Soul, Country, Jazz, Hip Hop, Classical, Instrumental, Latin, World, and on and on…

Jason Sitzman is a Singer/Songwriter based out of Lincoln, NE. Jason's inspiration and sound is as diverse as his participation in music throughout his life. In college, Jason competed with a internationally ranked Barbershop Quartet Downpour. After College Jason joined up with the band, The Spins, a college rock-est sound. In 2008, he moved to Colorado and began to expand on his music writing, returning to Lincoln with a list of songs that he performed as a solo artist as well as with North of Neptune.
Genre wise, Jason refuses to stick to one. Listening to a diverse portfolio of music helps to amplify on music writing. When it comes to writing, he plays what feels good.
You can reach Jason on Facebook and follow him on Twitter @SitzmanMusic.