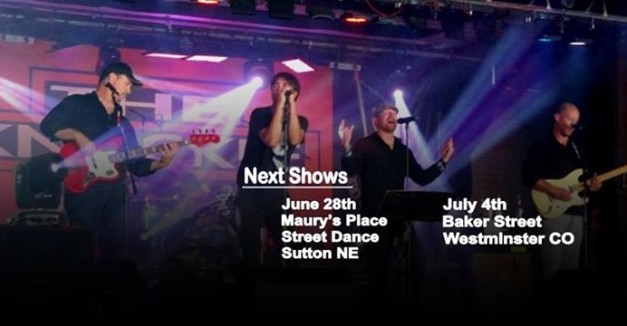 We are all closet Justin Bieber fans, what else do you want to know?

In the spring of 2008, guitarist Isaac Sulzle who has performed throughout the Midwest since 2001, & drummer Keith Perkins who has played with Isaac in the Band Matic Impulse for 4 years, were looking for a bass player to fill in a jam trio. In stepped Mark Sulzle, AKA “Jeri-Atric” or “G-pop” (the old guy). Weekly jam sessions quickly grew into working out songs of favorite bands such as the Beatles. In reference to one of the Beatles songs, the name “Glass Onion” was born. Lead Singer Brad Martinich came in spring of 2009 bringing his well trained Montana born voice into the band. Brad brings the voice that does justice to the great songs of the last 50 years of Rock Music. Glass Onion hit the Midwest Live music venues over the next 1 1/2 years. Performing in combination with the Band Matic Impulse. In the end it was a natural integration to add Matic Impulse front man Brandon Logston to the band as permanent singer and complement to front man Brad Martinich. With Brad leading the charge with his great rock voice and Brandon complementing Brad with his high energy performances Glass Onion’s identity as an experienced, guitar driven, entertaining 6 member rock band that brings the best of 50 years of Rock & Roll was developed.