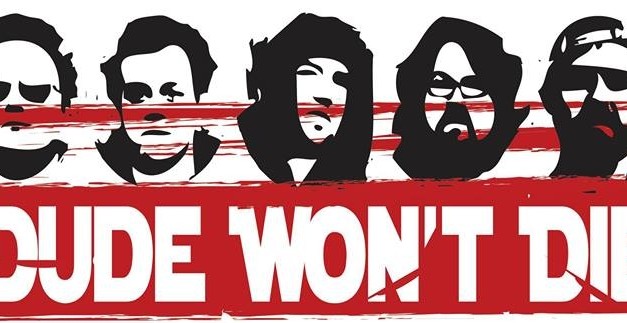 Dude Won’t Die is my baby daddy, and they refuse to pay child support!

In the autumn of 2009, Nebraska Governor Dave Heineman (R), sensing a momentous election year approaching, decided to put together a kick-ass soft rock group to spread the good news of conservatism and budget-slashing educational policy in an accessible format of digestible power-pop-doom-rock. After a lengthy screening and application process of a half dozen candidates from across the Big Red State, he chose five young, white males to represent all things red: Republicans, Husker football, and Rudy, that 6th-grader whose school picture got sent to the Blue House on mistake. Little did he know that the five musicians–Geoff, Jason, Scot, Sammy, and Todd–were secretly and redundantly secret agents for a new world order, the Order of the Dude. By the time he realized what a national security mistake he’d made, it was too late: Dude Won’t Die had established a new hegemonic order, one where No-Coast Fascism was supplanted by the redemptive power of Rock n’ Roll. Now, from their heavily guarded base in Lincoln, Nebraska, the unrelenting hyperactive cabal of DWD plot their next move, and patiently await the coming of a pizza delivery.