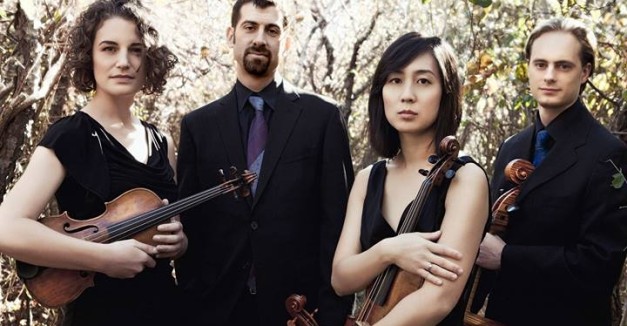 Renowned for bringing fresh excitement to traditional string quartet repertoire as well as for creating insightful interpretations of new music, the Chiara String Quartet (Rebecca Fischer and Julie Hye-Yung Yoon, violins; Jonah Sirota, viola; Gregory Beaver, cello) captivates its audiences throughout the country. During 2011-2012, the Chiara is celebrating twelve seasons of playing together.The Chiara has established itself as among America’s most respected ensembles, lauded for its "highly virtuosic, edge-of-the-seat playing" (The Boston Globe).

The Chiara String Quartet serves as Blodgett Artists-in-Residence at Harvard University, where it recently completed a complete cycle of the Beethoven quartets.The Chiara's honors include a top prize at the Paolo Borciani International Competition, winning the Astral Artistic Services National Audition, and winning First Prize at the Fischoff Chamber Music Competition. Awarded the Guarneri Quartet Residency Award for artistic excellence by Chamber Music America, the Chiara Quartet has also been the recipient of grants from Meet The Composer, The Aaron Copland Foundation and the Amphion Foundation.

The Chiara Quartet performs in major concert halls across the country, including Lincoln Center's Alice Tully Hall, Carnegie Hall's Weill Recital Hall, Philadelphia's Kimmel Center, the Philadelphia Museum of Art, the National Gallery in Washington DC, and Harris Hall at the Aspen Music Festival. The ensemble also devotes a portion of its performance season to concerts in non-classical venues including (le) Poisson Rouge and Galapagos Art Space in New York, The Tractor Tavern in Seattle, Avant Garden in Houston, and the Hideout in Chicago, among many others. Recent highlights of the Chiara Quartet's international performances include the American Academy in Rome, a critically-acclaimed eight-city tour of Sweden with clarinetist Håkan Rosengren, and a performance of Steve Reich's Different Trains in Munich.

Described by the Seattle Post-Intelligencer as "vastly talented, vastly resourceful, and vastly committed to the music of their time," the Chiara has commissioned and premiered new works since its inception.In the 2010-11 season the Chiara embarked upon a large-scale project in four cities called Creator/Curator, commissioning new works for string quartet by composers Nico Muhly, Huang Ruo, Daniel Ott and Gabriela Lena Frank.Each composer curated the concert on which his/her piece was premiered, choosing music that complemented and gave context.The Chiara has also commissioned works from Jefferson Friedman, Robert Sirota, Michael Wittgraf, and Carl Voss, among others. In the 2011-12 season the Chiara will premiere Harvard faculty composer Hans Tutschku’s new work for string quartet and electronics, as well as perform Richard Beaudoin’s String Quartet No. 2, Étude d'un prélude X.

In April 2011, New Amsterdam Records released the Chiara's recording of composer Jefferson Friedman's String Quartets Nos. 2 and 3 to great critical acclaim.Both celebrated pieces, which "already deserve to be heard as classics of this decade" (The New York Times) were commissioned by the Chiara, and are the result of a more than ten-year friendship with the composer.The New York Times called the Chiara’s performances “vital,” and the San Francisco Chronicle commented on the Chiara’s “lush ensemble sound that brings out the hidden depths of Friedman's harmonic language.”

The complete Chiara discography includes the Mozart and Brahms clarinet quintets with Håkan Rosengren for SMS Classical, and the world premiere recordings of Robert Sirota's Triptych and Gabriela Lena Frank's Leyendas: An Andean Walkabout for the Quartet's own New Voice Singles label. The Chiara is also featured on Nadia Sirota's debut recording for New Amsterdam Records, first things first, which was included on "Best of" lists in The New York Times, The New Yorker, Time Out New York, and many more. Other recent collaborators of the quartet include The Juilliard String Quartet, Joel Krosnick, Todd Palmer, Simone Dinnerstein, Norman Fischer, and Paul Katz, as well as members of the Orion, Ying, Cavani, and Pacifica Quartets.

The Chiara Quartet is widely sought out for its innovative work in outreach to urban and rural communities of all ages throughout the United States.In 2011, the Chiara was the first judge of the online string quartet competition “The Quartet Project Challenge,” an opportunity for young quartets from around the world to post performances on YouTube of new works by composer Geoffrey Hudson and receive comments from a professional quartet. In the 2011-12 season the Chiara will present a four concert series at Matt Talbot Kitchen and Outreach, a unique organization serving the working poor and homeless in Lincoln, NE.

The Chiara Quartet has been artists-in-residence at the University of Nebraska-Lincoln since 2005. In the summer, they are in residence at Greenwood Music Camp as well as the University of Nebraska-Lincoln's Chamber Music Institute. The Chiara trained and taught at The Juilliard School, mentoring for two years with the Juilliard Quartet, as recipients of the Lisa Arnhold Quartet Residency from 2003-2005.

Chiara(key-ARE-uh) is an Italian word, meaning "clear, pure, or light." More information about the Chiara Quartet can be found online at www.chiaraquartet.net.