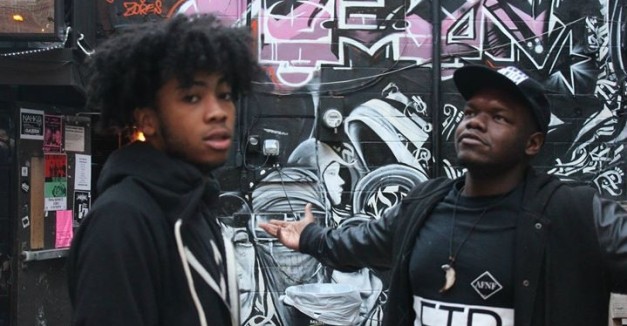 BOTH is an alternative hip-hop duo from Omaha, NE, consisting of Scky Rei and producer/DJ INFNTLP.

After releasing their 2014 full-length self-titled debut BOTH (featuring the single “Toothpaste” with savemoneys Kami De Chukwu), The hip-hop duo spent nearly two years bringing their diverse inventive brand of alt-hip-hop to festivals and venues around the midwest. To deal with the chaos of finishing a regional tour with rock band “The Seen”, signing with Make Believe Studios, OEAA Nomination, and playing shows with legendary bands Desaparecidos & Neva Dinova, the duo threw themselves into creating material for their next extended play. The EP "BOTHSUCKS" was released in August 2015 by Make Believe Recording.

Live performance and having fun has always been essential to BOTH, who formed in 2012 and quickly earned a grassroots following by performing extensively and independently releasing their debut album. After signing to Make Believe Records, the band plans their indie-label debut with the release of Both Sucks. Everything that we make is “feeling” music; previous experiences that the majority of people can relate to or understand what we’re talking about. Says Scky Rei, emcee of the group co-founded by fellow bandmate and producer INFNTLP.

BOTH use the universal energy of life experiences to infuse their music with both raw story telling, futuristic boom-bap beats, and relatable vulnerability. INFNTLP, the bands producer, works with uniquely crafted beats and exclusive drops to manifest soul-driven hip-hop music that’s artful yet unusual for hip-hop.
More Stories