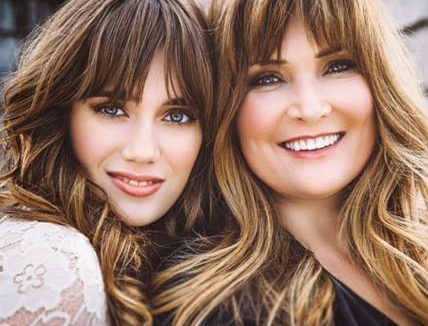 They’re compelling singers with harmonies as rich and pure as a pitcher of fresh cream, and they’re masterful songwriters with lyrics that can at one time be poignant and meaningful, and at another clever and fun. They’re also charming, warm, funny and attractive. Belles & Whistles is quite literally all the bells and whistles.

Belles & Whistles is made up of 18 year old energetic, ethereal mezzo-soprano Kelli Jones and guitar-strumming, folky Jaymie Jones. They look like sisters with matching gentle doe eyes that simultaneously sparkle with the spirit of wild mustangs, and their long hair glistens copper in the Omaha sunshine. They’re a little bit country and a little bit…wait. They’re a LOT country, but, in truth, they are a little rock ‘n’ roll.

Oh yes, and they aren’t sisters, they’re mother and daughter. And she—Mom—started it when she and her three sisters formed the quartet Mulberry Lane on Refuge/MCA Records, Los Angeles.
Jaymie, or “Mom” as Kelli calls her, explains, “We wrote our own songs, I played guitar and we were a harmony-driven acoustic, pop, folk group. We signed our record deal in 1999, moved to LA from Nebraska, and toured all over Europe and the U.S. We had a song that went Top 25 (“Harmless”) on Billboard’s AC chart and were about to go into the studio to record our second album when MCA in LA folded and we lost our deal. We all went back to Nebraska, but my sisters and I continued to write music and play around the midwest. Then we all started having kids.”
Jaymie was the first to have a baby and by the time her sisters started their own families, daughter Kelli was a teen. Mom continues, “My sisters were all pregnant and I thought, ‘I’m going to do my own singer/songwriter thing and I’m going to write the kind of music that’s closest to my heart, that I grew up on.’ Before long, I started playing locally with some of my original songs. One summer, Kelli was bored and asked if she could be my backup singer. I knew she was a good singer, but I didn’t know she could sing harmony. So, I sang some of my originals and she sang this perfect high part and I was like, ‘Wow, okay! You can try it out for fun.’ At our second show, Albert West, production manager for The Judds, happened to be working the festival stage, and he said, ‘You two should be a duo.’ We talked about it for three or four months—Kelli wanted to do it right away, but I have been in the music business so long and know how difficult it can be, but we booked some more shows as a duo and she just loved it.”

Kelli agrees. After years of her mother exposing her to all of the opportunities for sports, theater and music that she could, the young brunette knew that music was where she belonged. “I tried soccer and I tried sports and I was just so bad at it,” she says, laughing. “I would score goals for the other team. Then Mom put me in dance and I did like dance a lot, but I grew up around all this music, so it was pretty natural for me. Even when I was really little, people would ask what I wanted to be when I grew up and I’d say, a singer. That’s always been what I wanted to do.”
Actually, the younger Jones really did want to just sing back-up for her mother, but it wasn’t long before the roles were switched and Kelli became the lead singer. “For a long time, I didn’t want to be the lead singer because I thought she was a much better singer than I was,” she admits. “I had grown up watching her on stage and I thought, why would I sing lead when she can sing lead? I really do enjoy singing harmony and I kind of miss that now, but I understand why I’m lead now and it is challenging, but I love it.”

In reality, while Kelli takes the lead lines, she and Jaymie execute a magical vocal dance, weaving in and out of each other’s harmony parts, one taking the high, then alternating to the low seamlessly and effortlessly.

They were dubbed Belles & Whistles by Jaymie’s sister Allie and it wasn’t long after they put their voices together that they also put their heads and their pens together to begin writing their own original material. The type of acoustic guitar-driven music that Jaymie had already been writing and that the pair were listening to on the radio became the foundation of influences on which the duo would build their career. Singer/songwriters like Dolly Parton, the Eagles, Carole King, the Everly Brothers, Emmylou Harris and, of course, The Judds, provided the pair with plenty of inspiration when it came time for them to evolve from duo partners to co-writers.
“In the beginning, we kind of wrote together and I felt like I was teaching her to write,” says Jaymie. “But I was surprised when we came to Nashville and started doing co-writes. At the first Nashville co-write, I was telling Kelli, ‘You have got to speak up, you have got to be brave. You can’t just sit there and have your editor on. You’ve got to put ideas forward. It can’t just be on me.’ So, we go into this co-write and she’s got all these great ideas and the other writer was like, ‘Wow,’ and I was like, ‘Wow.’ That’s when she truly became a writer, when we started coming here. I was so proud of her.”

Another thing that happened when the duo came to Nashville is they were able to hone in on their sound. Jaymie recalls, ““We sat down with our producer Dan Frizsell (Lee Brice, American Young) and our manager Julianne Drenon and we all agreed, ‘We want it organic and rootsy, and we don’t want to be too slick. We love the Dixie Chicks and Trio, we love that music so much, and being mother and daughter, that just seems how we blend and how we fit together. What I love about music is when we can write songs and play guitar and sing in this real way, like as if folks were in our living room. It’s all about the music and the lyrics and the songs, it’s not about how you look, it’s what you sing. That doesn’t mean you can’t have a great, fun live show where you do fun songs. We aim for fun songs, we aim for meaningful songs. It’s just developed really naturally.”

Belles & Whistles has obviously been successful in creating that “great, fun live show.” Alternating their originals with favorite country and rock covers, they’ve landed opening slots for artists like Kenny Rogers, the Oak Ridge Boys, John Michael Montgomery, Jerrod Niemann, Old Dominion, Josh Thompson and more. And as much as they’re enjoying recording their debut album, it’s the road that lights them up the most. Jaymie says, “It’s exciting to see people starting to react to our original songs at our lives shows. It’s so rewarding because you feel like you’re hitting a nerve with people and they’re connecting. That’s what it’s all about.”
Between stops on a heavy tour schedule, which also includes shows with Lee Brice, Brett Eldredge and Dan + Shay, Belles & Whistles will alternate their time between their Omaha home where Dad and two brothers have a “boy’s club,” while Mom and Sis are on the road, and Nashville where they’ll continue recording their debut album with Dan and a team of world class musicians. Kelli giggles and admits, “When I had to go in to sing the scratch vocal when those musicians were playing, it was hard to not freak out. It was really fun.”

What can fans expect to hear on that first project from the country duo blessed with familial harmonies? “It’s not very slick,” Kelli says unapologetically. “It’s very organic and real. It’s all about the songs for us. We want to have songs that are different and more meaningful. We’re really proud of what we’re coming up with. I think it’s going to be a different sound than what people are used to hearing right now, but I hope they like it.”

In a conversation with the mother and daughter, it’s not hard to see that the duo isn’t just mother and daughter, but are also each other’s biggest cheerleaders. Jaymie confirms that. “We get along really well because I’ve always treated her like an equal and an adult in our duo. She’s very much an equal, if not leader. I have a lot of experience, but she has a lot of great intuition and she has her generation to speak for. So, it’s important to me that she knows we’re partners in a duo, not mother/daughter. That’s what makes it work. Growing up and singing with my sisters, you have to let everyone have their say and you have to be honest with each other. I think Kelli feels open enough to tell me things and I don’t pull the mom card on her at all when we’re working. We try to make everything fun. Even our band, the three guys who play in our band are from Nebraska and they’ve been with us for two or three years. They’re just a riot. We have so much fun with them.”

She pauses before adding, “Kelli has so much talent and drive, and she works so hard. It’s truly amazing. She’s an old soul. A lot of times I don’t feel like I’m working with an 18-year-old because she’s so mature. I feel so blessed to be working with my daughter. It’s such an adventure.”
Kelli chimes in, “Mom has allowed me to grow into my own person with confidence and an open mind. She’s my biggest role model. Whether we’re touring or writing or just at home making dinner, she’s the kindest person I know, and she’s taught me so much about appreciating every moment of this journey and every person we meet along the way.”

“Big out-front blood harmonies are their calling card, so that it takes on a life of its own; they have found their sound, a lovely The Everly Brothers-meet-The Bangles sound.”

“In this era of over-electrified and over-simplified country music, Belles & Whistles provide a breath of freshness this format needs. Hip enough to be played by today’s hot, new country stations and yet pure and thoughtful enough for traditionalists, as well. It’s been almost 30 years since country music has had a strong mother/daughter duo, but thanks to Belles and Whistles, that is all about to change.”