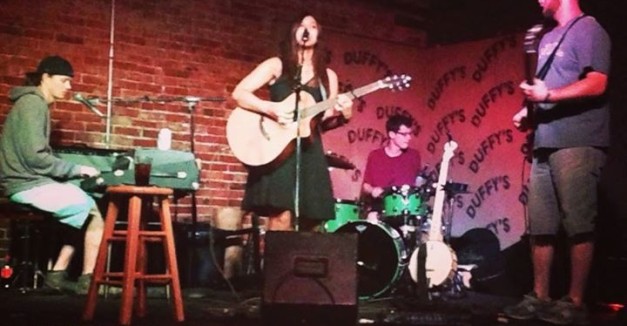 Close your eyes & clique the musique tab. Reverse the order if you’re having trouble.

About Us:
We are a band named Ariel & The Arga Knots and we live in an exotic city called Lincoln, Nebraska.
﻿
Singer/songwriter/eye-roller extraordinaire Ariel loves puns, puppies, and crossword puzzles; drummer Cal loves man tank tops and confusing time signatures; guitarist Mike loves his lady friend and being the tallest man alive; bassist Tyler loves beards, beers, and babes; and keyboardist/vocalist Will loves... possibly nothing.

But we all love making music and we recorded our EP ourselves-- in garages, bedrooms, and back alleys. We're ever-working on new recordings.
﻿
All the dudes are from Nebraska, while Ariel is a Kansas native, but fancies herself as a bit of an adventurer, which proves tricky when buried by plains and corn fields. As a consequence, she writes songs that draw from folk influences and have a strong sense of escapism, set against a backdrop of nature and the changing seasons. The Ariel & The Arga Knots EP is a first draft of a set of true stories about discovering what it means to be a human.