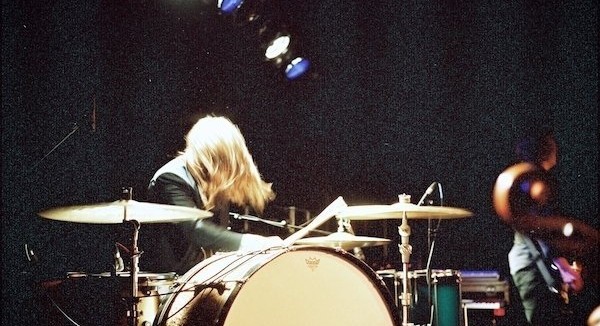 Our debut LP, “Nightingale” is available now! Find it on iTunes or contact us for a hard copy!

Anniversaire’s album Nightingale may sound like the product of a meticulous, involved studio session, but singer Aaron Jordan says the orchestral pop band knocked out the recording of their debut disc in three days.

The band’s friend Luke Mabie engineered the self-produced album, after having worked on a live DVD they had recorded. During that process, Mabie says he quickly became interested in working with the band again.

“I fell in love with their band,” he says.

Mabie and the band were going to set up and jam at a house Mabie lived in around 30th and Pacific streets. But the band began talking to ARC about recording rates. The initial thought was that the band would record all the drum tracks there and then finish the album elsewhere.

Anniversaire spent the bulk of their recording time in ARC’s B room while Sea Wolf was working in the main studio. The band basically got full reign of ARC’s equipment inventory and even got input from A.J. Mogis, who would suggest pieces he liked using.

During the sessions Anniversaire was able to play around with an upright acoustic piano they disassembled and surrounded with microphones, just to see what sound would come out.

At first, Anniversaire booked only two days in the studio, but eventually booked two additional half-days to finish the album.

“We walked out of there having done the whole record, going in only to do the drums,” Jordan says.

The band took the ARC sessions and mixed them with Mabie, using borrowed time and equipment, before finally turning to Jason Burkum to finish the process.

Burkum told the band just how massive their heavily layered record was, by informing them he had to borrow computer equipment and space to store the plus-sized music files.

The band had its origins at another recording session about two and a-half years ago, after Jordan, Ahrenholtz and Eberly’s previous band, O Lovelle, dissolved. The band had just recorded a three-song demo with Matt Tobias, who offered to re-track the demo to reflect the changing line-up.

So Jordan, bassist Travis Ahrenholtz and drummer Ben Eberly began working on material in the studio, without a name or any idea what was going to happen. Jordan says it was an experiment more than anything.

“It wasn’t a start date as much as a growing period,” Ahrenholtz says.

“We kind of formed in the studio,” Jordan says of the trio. “It was kind of a weird transition.”

Jordan says the band’s roots go back a few years. Having always played music together has tied them together. “I think it’s been an important dynamic,” Jordan says. “The common ground that we have is the music and not our shared history.”

Anniversaire’s adaption from O Lovelle’s two-guitar indie rock sound to a more layered, austere pop band spurred Jordan to move permanently to keys. After that switch the band went to Minnesota on the Fourth of July, where they bought a Fender Rhodes piano that had previously been owned by Dweezil Zappa.

After those demo sessions, the band expanded to include cellist Megan Siebe.

Jordan says there’s a trust in each other’s musical ability and it helps members bring different takes to what they are doing.

Jordan, the band’s songwriter and lyricist, says he draws on a love for film scores and incorporating that concert orchestra vibe into the band’s pop songs. Jordan and cellist Siebe have studied music in college.

Ahrenholtz says the band members respect each other’s differences in taste, and it helped strengthen their work together.

“We started turning out music that we all loved,” he says.