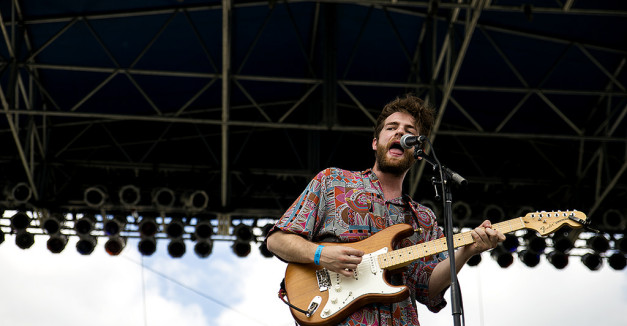 Saddle Creek Records can boast another artist featured on NPR’s All Songs Considered.

Every week since 2000, Bob Boilen and Robin Hilton, hosts of the online radio show, run down a handful of recently released songs. On yesterday’s edition, the show featured Twinsmith’s “Alligator Years.”

“It’s the sound of me realizing I’m not going to die and everything is going to be okay,” Hilton says about the song.

The track is the first single from Twinsmith’s forthcoming album of the same name, due out May 5. It’s the Omaha quartet’s second full-length, its first with Saddle Creek. Luke Pettipoole of The Envy Corps recorded the album at Sonic Factory in Des Moines.

Reptar had a big day yesterday.

The experimental-pop band released its second album, Lurid Glow, on Joyful Noise and premiered a video for “Amanda” from the album on Paste.

Lurid Glow flits around through genres and instruments, never content to settle into one groove. It relies equally on brass sections and synthesizers and Omaha-based frontman Graham Ulicny’s voice jumps between a reverberating wail and near-chanting. We’ll have a full review of Lurid Glow next week.

Buy the album here. Catch Reptar at Slowdown on April 14.

50 years after the release of his iconic “Alice’s Restaurant,” Arlo Guthrie is striking out on tour to celebrate the track and album of the same name. That tour stops at Holland Center in Omaha on April 28.

Guthrie will perform the songs live in its entirety for the first time in a decade. The 18-minute song is a deadpan satire based on a true story about avoiding the Vietnam War draft.

Tickets start at $20, get yours here.

It will be a good summer in Omaha for anyone who listened to alternative emo music through the mid- to late-00s.

Brand New will play Ralston Arena on June 29 with Manchester Orchestra (RSVP). To our knowledge, it will be the first time Brand New has ever played in Nebraska. Motion City Soundtrack will play on June 25 at The Waiting Room (RSVP). To cap it off, Say Anything will play The Waiting Room with Modern Baseball, Cymbals Eat Guitars and Hard Girls on July 18 (RSVP).

Motion City Soundtrack released its most recent album, Go, on Epitaph in 2012. The band had a number of alternative hits through the ‘00s.

White Mystery announced this week that a feature-length film about the band, That Was Awesome, will premiere at Chicago International Movies and Music Festival on April 20.