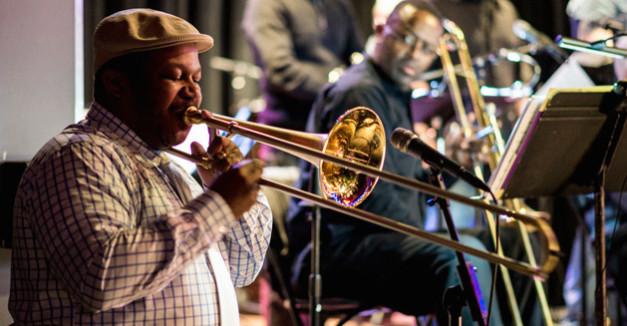 We’d like to kick off today’s news with a big “thank you” to Nebraska Arts Council for awarding Hear Nebraska a mini-grant to help put on our Take Cover series.

The organization’s mission is to promote, cultivate and sustain arts for the people of Nebraska through grant-funding. Nebraska Arts Council allocated money to Hear Nebraska to help with travel, operations and promotional costs involved in the Take Cover concert. We are deeply appreciative that the council found the same merit we do in the Take Cover project.

Each year, Take Cover asks about 15 local songwriters to come together and play two songs each — one original and one cover song. It’s at The Waiting Room on Jan. 23 with the members of Icky Blossoms, See Through Dresses, Feel Tight and more. RSVP here. Members of Universe Contest, The Bottle Tops, Thirst Things First, Churls, Freakabout and more will perform at The Bourbon on Jan. 30. RSVP here.

We’ll also be raffling prizes donated by local businesses. Hope to see you there.

Tonight, we’re hosting our monthly showcase at Urban Outfitters with Timecat and Fake Plants. It’s usually the first Thursday of every month, but was moved around in consideration of the holidays.

Marcus Lewis Big Band plays Slowdown tonight with a collection of Omaha musicians in its ranks. The 17-piece jazz band will bring a different pace to the Saddle Creek-owned venue where Cold War Kids will play more often than contemporary big band jazz.

Omaha musician James Cuato, who will play in the band, told us Lewis’s band has been playing for three years with a rotating lineup. Lewis has a master’s degree in trombone performance and the group plays music he’s composed.

In the early ’00s, Lewis made a habit of playing The 49’er, and he’s since gone on to play with Bruno Mars, B.o.B. and Aretha Franklin. He also plays in Janelle Monae’s touring band. Lewis lives in Kansas City now, but tonight he’s back in Omaha with some of the city’s best jazz musicians.

Hopefully if you wanted to check out Gregory Alan Isakov tonight at The Waiting Room tonight, you got your ticket before they sold out just two days before the show.

If not, everybody’s got a price, right?

Our managing editor Chance Solem-Pfeifer spoke on the phone with Isakov earlier this week. Check out the Q&A here. And our interview with opener Nathaniel Rateliff will be out today.