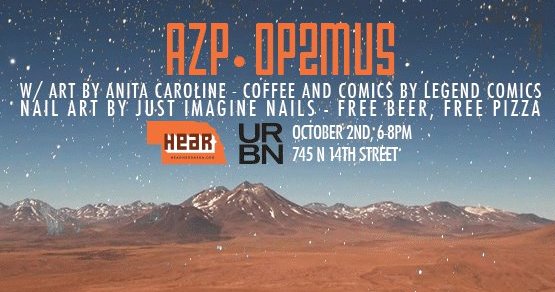 Omaha rock band Snake Island! announced yesterday that their time as a band is effectively at an end.

“We are no longer booking shows and our psychedelic journey can be considered complete. Thanks for the good times …” the band posted to its Facebook page.

The band has cancelled at least one show in Sioux City due to a wrist injury sustained by guitarist Allan Schleich.

The quartet has played together for four years, releasing a self-titled EP in 2012 and an LP, Evil Music, last year. Both releases are available on Snake Island’s Bandcamp page.

Hear Nebraska and Urban Outfitters continue the First Thursday showcase tonight with performances from AZP and Op2mus (a.k.a. Marcey Yates).

The hip-hop show features sets by both artists, as well as free pizza and beer, art by Anita Caroline, nail art by Just Imagine Nails and coffee and comic books from Legend Comics and Coffee. RSVP to the free 6 p.m. show here.

Bonehart Flannigan has the first of two album release shows tonight at O’Leaver’s with Matt Cox Band and All Young Girls Are Machine Guns.

Backpacks and Mason Jars is available on vinyl through Sower Records. Listen to our podcast review of the album here. Bonehart will host a Lincoln release show on Oct. 10 during Sower Records’ Lincoln Calling showcase at Duffy’s Tavern.

After Lincoln Calling, Bonehart Flannigan hits the road for an indefinite tour, heading first to the West Coast.

Wunder was Monday’s in-studio guest on Hear Nebraska FM this week, performing five songs and sitting down for an interview. Listen to his stark songwork here and see a video of his performance below.