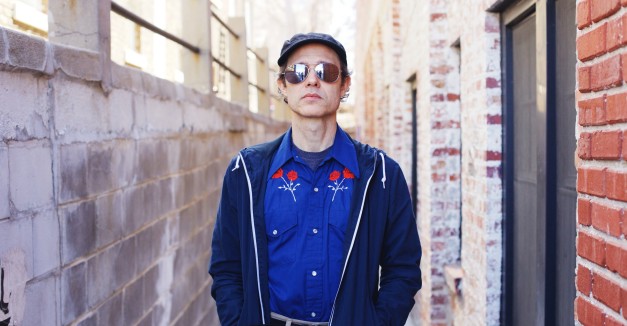 “These are songs about people, not places. They were written for the put-upon, the tortured, builders of arcs,” writes Dennis Callaci of Simon Joyner’s 25-year catalogue, filled with the downtrodden and depressed, heartbroken and lost.

For the first time, Joyner is releasing a selection of his own lyrics, Only Love Can Bring You Peace, compiled by him and his wife Sara. The book comprises images and characters of more than 15 albums, EPs and other releases.

Each chapter features an illustration of a lyric or album by Joyner’s artist friends. Callaci is one of them, and also runs Shrimper Records, which released 1997’s Songs for the New Year and live album Blue Melody: Live From the South, and collaborated with him on Stranger Blues and New Secrets.

Callaci’s foreword concludes: “This is a book written over the course of twenty-five years, wherein Joyner has boiled the grass, branch and bone of a lifetime of work down to next to nothing right there in the title. The name of this book is Only Love Can Bring You Peace, and knowing the kind of person he is, it is dedicated to you.”

Only Love Can Bring You Peace is due out in late October/early November, and is available now for pre-order here via Magic Helicopter Press.

Omaha band See Through Dresses has announced that, in addition to its new EP release on North Carolina label Tiny Engines, End Of Days will be released as a split cassette with Charlotte, N.C., band It Looks Sad.

While both bands are currently signed to Tiny Engines, the cassette will see release through Sludge People Tapes. End Of Days is out on all formats October 23.

Between live shows and the first single release, “Haircut,” we’ve heard much of End Of Days. The recorded versions build upon See Through Dresses often schizophrenic sound, bobbing along twangy and brooding before exploding into chaos. “Drag Scene” is the closest cousin to the band’s self-title LP, while the rest of the EP experiments with sludgy sounds, off-kilter choruses and the delicate acoustic title-track.

It Looks Sad’s half is a bit more low-fi, making use of negative space with reverberating guitars, beachy rhythms and fuzzy vocals. It Looks Sad will have eight tracks on this split, a combination of its 2014 self-titled EP and June 2015 mini-release Kaiju.

Hear Bib’s demo below, and catch them at Lookout Lounge Wednesday, Oct. 28 with Leftover Crack, Days N Daze and All Torn Up! (RSVP here).

When No Tide pulls up to a well-off suburban home, skipping up to the front door, it already feels like the band has ulterior motives.

In the new video for single “Sunday Morning,” the guys have posted an advertisement for their party-playing services. When Vincent Wentworth, “Local Rich Bitch,” takes them up on their offer, No Tide and friends crash the party.

The “Sunday Morning” video premiers today on absolutepunk.net. Its attitude reflects the song’s subject directly, an indictment of spoiled trust fund kids and others who frontman Will Conner feels have had everything handed to them.

No Tide released its debut full-length album Death Of The Sun June 30 on Massachusetts label Take This To Heart Records. If you missed it, we spoke with them about the record and the quartet’s hard-touring style in July.

Beach House plays Slowdown tonight, and if you aren’t already in, the show is sold out. RSVP here for info and possible last minute ticket vacations.

Benson First Friday hosts an Art Bazaar fundraiser, art walk and concert tonight in and around the Sydney. BFF just gained non-profit status and will look to expand its programming and operations in the coming months. RSVP to tonight’s event here.

Tomorrow night, Reverb Lounge celebrates its first birthday with Benson Soul Society dance party. This edition is also the first for Benson Soul Society at its new home. The venue will have cake and $1 off everything from 6-9 p.m. before dancing at 10 p.m. RSVP here.

Sunday, Neva Dinova’s Jake Bellows returns to Omaha for an O’Leaver’s Sunday Social with McCarthy Trenching and Whispertown. Sausages and homemade sides are available at 2 p.m., and music starts at 5:30 p.m. RSVP here.