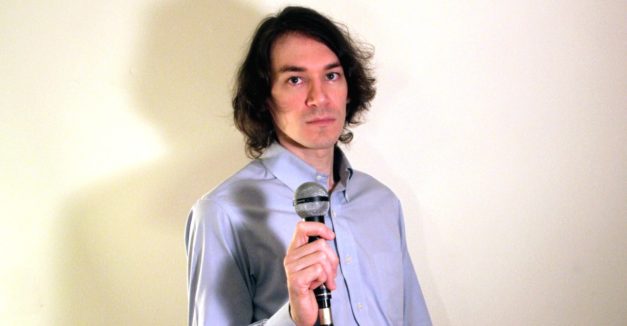 Long a rock musician in various Vancouver rock bands (including adjacent project Energy Slime with partner Jessica Delisle), the songs on Jay II explore Arner’s changing place within that environment and his coming to terms with himself. It’s done crisply and cleanly, with Arner and Delisle packing the recording session into a single month and leaving no room for fuss.

In advance of tomorrow’s show, Arner spoke with See Through Dresses’ Sara Bertuldo about his influences, new tour destinations and what’s hot in Vancouver right now. Read on for the Q&A.

Sara Bertuldo: How did you get started playing music? What are all the instruments you play?

Jay Arner: It was the time of grunge music so naturally I started playing guitar. I quickly became obsessed and picked up bass, drums, and a four-track, and then I started buying all the synthesizers I could afford. That was two synthesizers.

SB: Who are you influenced by?

SB: Do you tour with any other projects? Who is in your current touring band?

JA: Jessica and I have another band called Energy Slime that has the same core of me, Jessica, and our friend Adrienne playing bass. Our drummer on this tour is our other friend Evan from Sackville, NB.

SB: Tell us about Jay II. How you recorded it/what the songs are about/etc.

JA: I recorded the drums at our practice space and Jessica and I did the rest at home. The songs are about ummmmmmmmmm my life? My life at the time was two years of touring North America and the UK and wondering what the hell I’m doing.

SB: What are some cool bands out of Vancouver right now?

JA: So many! How about Cult Babies, Supermoon, Tommy Tone who is kinda out of Japan now though, and Milk.

SB: Do you have any sort of impressions of Omaha? Have you ever played here or anywhere else in Nebraska before?

JA: I’ve never been to Omaha or played in Nebraska and I can’t wait!! I’ve been to the Dakotas so I imagine it’s like Extra South Dakota (I’m dumb).

SB: What’s next after this tour?

JA: Jay II is coming out in Japan in October so we’re planning to go across the pond this winter.

Omaha Under The Radar applications open

Omaha Under The Radar is now accepting applications for its fourth annual festival July 5-8. Performing artists specializing in contemporary and experimental genres are encouraged to apply by Dec. 1, 2016.

In its first three years, Omaha UTR has presented nearly 300 boundary-pushing artists from 20 cities throughout the U.S., as well as some of Nebraska’s most talented “aesthetic risk-takers,” as founder Amanda DeBoer Bartlett put it to HN before this year’s festival. Past performers have included the Mighty Vitamins, Dereck Higgins and Bus Gas.

The experimental/contemporary music festival has also made education a priority, featuring performance-enhancing camps for musicians leading up to and throughout its run.

The free application can be found here. Direct questions to omahaundertheradar@gmail.com

For more insight into Omaha Under The Radar, read this Q&A with Bartlett here, which previewed this year’s festival.

As Rig 1, the solo emcee project of Desaparecidos keyboard player Ian McElroy, gears up for its upcoming solo release, Impose Magazine has debuted the album’s first single, “Activate.” The track will appear on McElroy’s third album Tasting The Mothership, out November 18th.