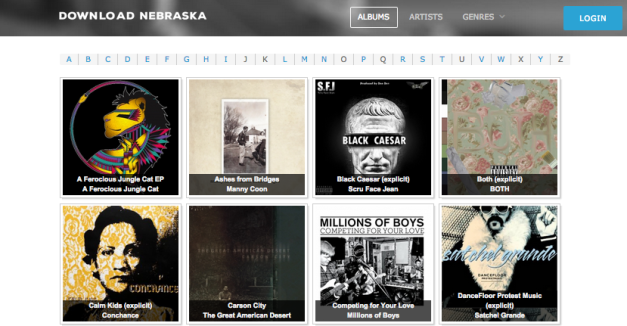 Download Nebraska is a free Nebraska-music database containing an eclectic 50-album library, filled with some of the state’s finest contemporary artists. Like any other library sections, bands from A Ferocious Jungle Cat to Little Brazil to Yuppies are alphabetized and searchable by genre, album and act name. Each album is streamable for anyone, or as a free download for any library cardholder.

Not only does Download Nebraska offer the opportunity to introduce new fans to local music, but it gives Omaha Public Library another media resource.

“We value the library, and want to see young people continue to find it not just relevant, but critical,” says Hear Nebraska Executive Director Andrew Norman. “We’re proud to be partnering with Omaha Public Library on this culturally important project.”

OPL Marketing Manager Emily Getzschman says the partnership provides two-fold benefits, both to member and in support of local artists.

“People will be able add music from some of their favorite local bands to their personal playlists, and possibly discover new favorites in the process,” Getzschman says.

The database serves as a great musical starting point for longtime Nebraska music fans and those just dipping their toes into the water. Many well-known acts are accounted for — including Tim Kasher, Digital Leather and Simon Joyner — alongside local mainstays such as Universe Contest, Both, Kill County, M34n Str33t, Domestica and many more.

To kickstart the project, Hear Nebraska curated the first 50 albums with any eye toward diversity, as well as album quality. Contracts with bands designate the albums to be removed from the site in July 2017. Hear Nebraska and the Omaha Public Library plan to accept submissions for the next round of albums, and will report on how that will work within the next couple months in this daily news column.

The bleak tale of an increasingly-dispirited professional musician in The Good Life’s “The Troubadour’s Green Room” has found physical form in the band’s newest music video.

As an illustrated accompaniment — and the first music video from the Aug. 14 Saddle Creek release Everybody’s Coming Down — the clip follows frontman Tim Kasher’s lyrics fairly literally. Floating lips sing “oh” and microphones are located conspicuously throughout the video, appearing where he sings about daydreams and “the girl on the trapeze.” Illustrator Bryan Brinkman — an Omaha native who now lives in New York — sprinkles in whales and the ferris wheel, images from the Everbody’s Coming Down cover art.

“After deciding upon the line drawing feel, we gave [Brinkman] license to come up with the images and concept,” Kasher tells A.V. Club, which premiered the video yesterday. “The lyrics lean toward tongue-in-cheek, though I hope they resonate a little with other songwriters.”

See the video for “The Troubadour’s Green Room” below. The Good Life is on a U.S. tour now with Big Harp (who themselves just released a new LP), and will conclude their trip at Omaha’s Slowdown Nov. 28 (RSVP here).

L.A.-based troubadour Jared Burton performs from the stage inside Bench wood workshop and gives a telephone interview on the first installment. Bench is a co-working studio in downtown Omaha, and with a built-in stage and industrial feel, the space would seem to lend a rugged, hand-crafted feel to an intimate concert.

David’s brother Matt hosts the podcast, conducting interviews with Burton and the other performing musicians, which include Vetter, Mainelli and their Bazille Mills bandmate Laura Streeter. Vetter and Mainelli initially conceived of the series as an intimate, invite-only house-show at Bench, which Vetter says will continue this fall.

Listen to the inaugural Bench Session here, and check out the series Facebook page here for more information

For those itching to give feedback on this year’s Maha Music Festival, organizers have released an exit survey.

The questionnaire asks for opinions on nearly all aspects of the festival, from favorite nonprofit in the Community Village to desired musical acts and vendors for next year’s event. Last year, Maha’s crowdsourcing efforts reportedly sparked a massive campaign by fans to draw Modest Mouse to the festival, the fruits of which manifested in sold-out fashion. (Knowing we missed the At The Drive-In reunion at Coachella in 2012, we’ll simply go with the flow).