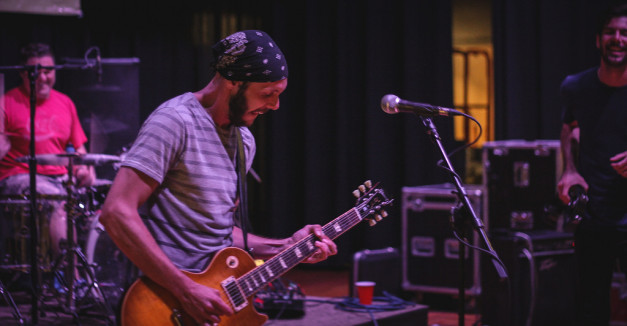 The West Point crowd put a strong showing in for hometown singer/songwriter Dustin Prinz last night, and some may have gotten more than they expected.

Prinz’s lyrical topics range from weary, mournful ballads to a tongue-in-cheek, dinner at grandma’s parody of “Sweet Dreams” to earnest thoughts on his fight with addiction. Though many left after his performance, they got a taste of flavorful songwriting and skillful guitar looping.

– When Rock Paper Dynamite took the stage, the crowd had peeled down to half its initial size. Kudos to the already high-energy southern rock quartet for keeping it light. They immediately drew a significant amount of fans to the front stage, an uncommon sight so far on this tour.

– Speaking of that, audiences have typically been set far back from the stage regardless of how populated. With a small (relative to the rest of tour), indoor room, this was the first time it felt like a club show back home.

– John Klemmensen and the Party brought it as well. The Party was without vocalist Molly Welsh, which meant a trade of the theatrical harmony moments from the new album for a straightforward rock sound. The low-end tone burst from Klemmensen’s baby blue semi-hollow body electric on “’80s Heavy Metal,” and where Rock Paper Dynamite drew energy from their devil-may-care attitude, Klemmensen drew on his own admitted anguish.

The Good Living Tour is in Nebraska City tonight, with performances by So-So Sailors, Kill County and A Summer Better Than Yours (RSVP here). First, see photos from last night below: 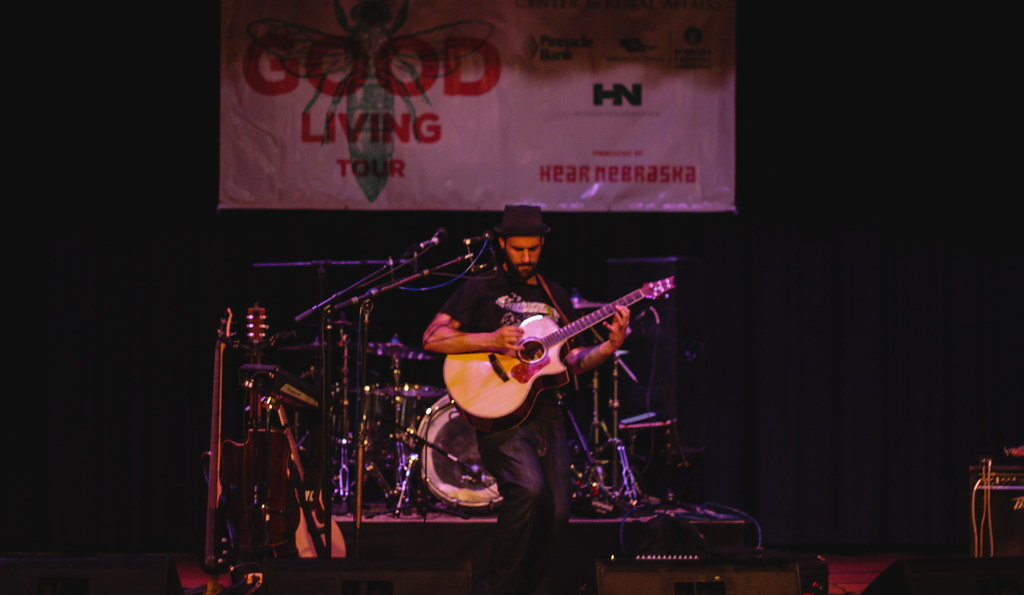 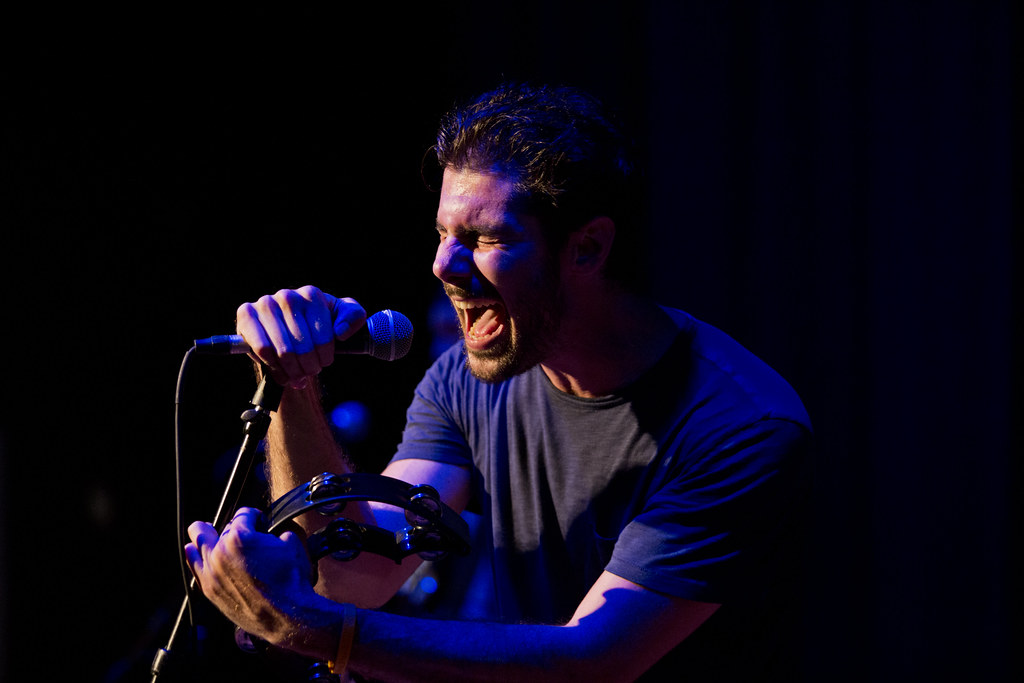 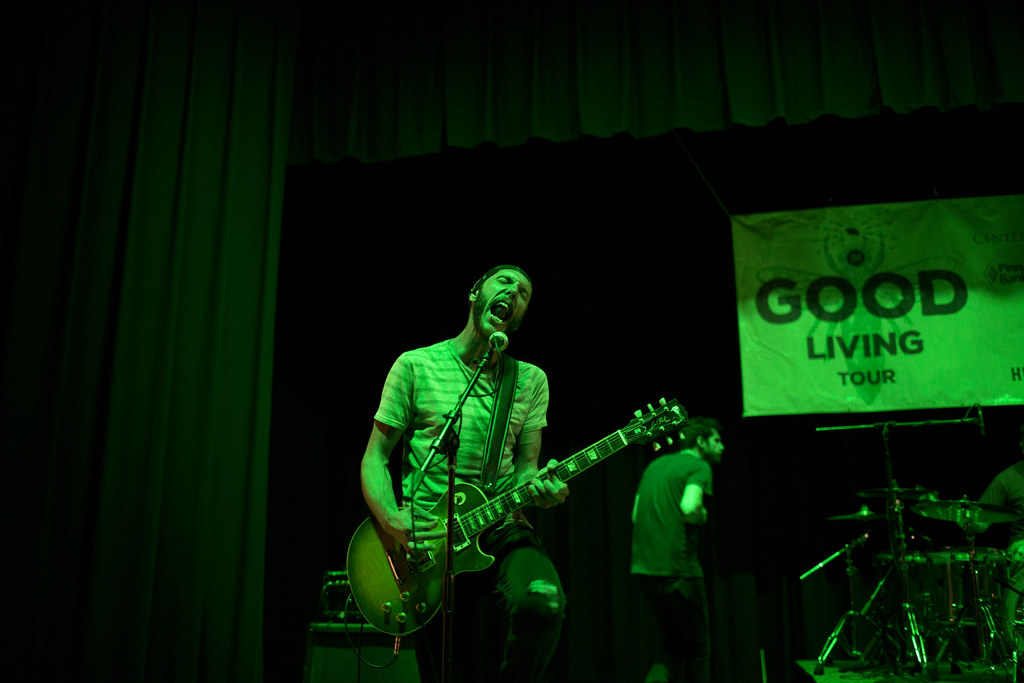 John Klemmensen and the Party 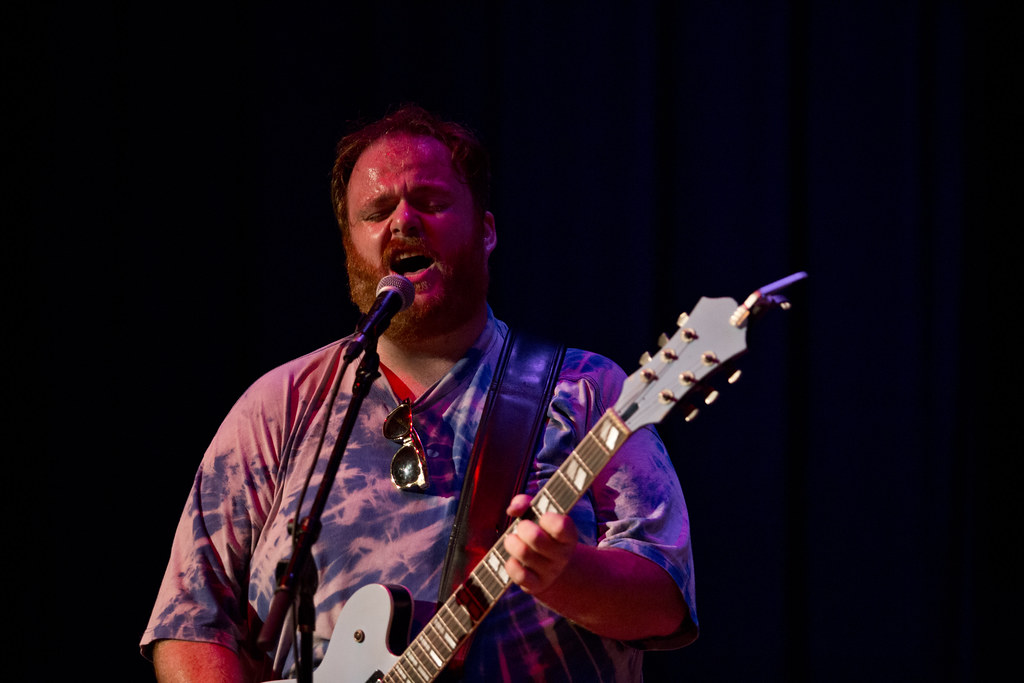 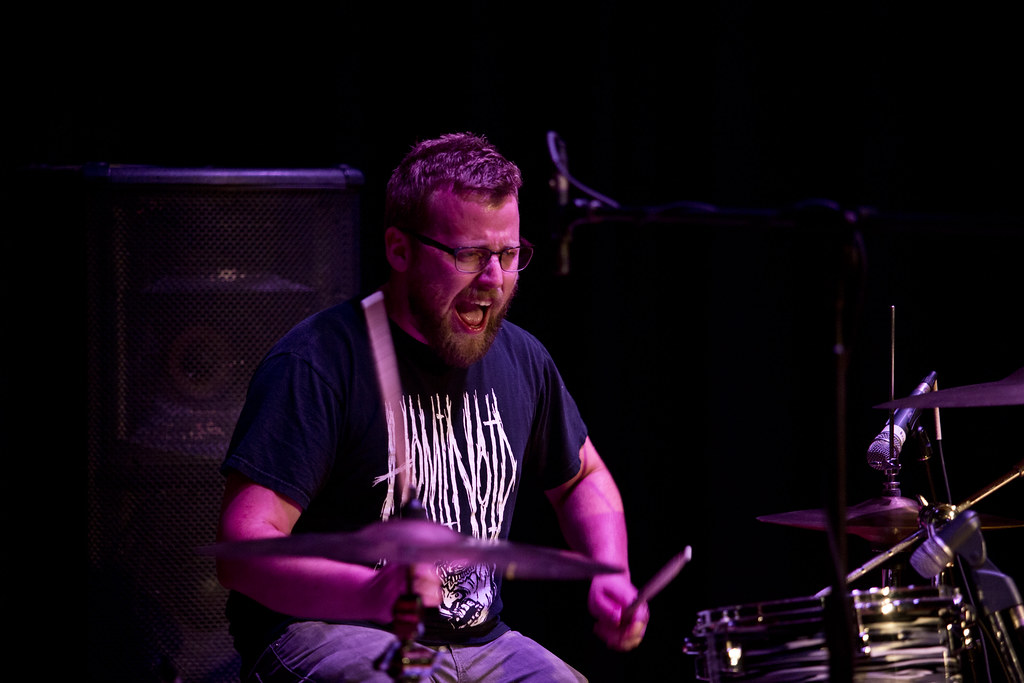 Streaming services are an undeniable part of the music business landscape in 2015. They provide convenience for listeners and possible exposure for independent acts.

But ask any working musician about Spotify or Apple Music or Tidal, and the opinions run the gamut. Most agree that the compensation is minimal, but some argue that having music available to listeners can be beneficial and lead to ticket and merchandise sales on the road. Others admit they have no control, find the conversation insignificant and choose to continue making music regardless of what streaming provides.

Omaha’s own Tim Kasher sounds off on the subject in a recent Newsweek article that addresses the subject of music streaming. The piece is a compilation survey of notable independent artists, including Kasher, Speedy Ortiz singer/guitarist Sadie Dupuis and singer/songwriter/producer John Vanderslice.

Kasher admits to being “incensed” when Spotify first started, but has chosen to “play nice” with streaming services at the behest of his label (Saddle Creek). He also notes the latent effect on producers and engineers, who he says would be recognized even less by fans if recording quality deteriorates or becomes unimportant.

Read his and other takes on music streaming in the Newsweek article here.

Omaha hip-hop duo Both performed at 13th and Howard for Hear Omaha yesterday. It was a different look, with added live musicians filling out the sound. (We’ve searched around, and as far as we can tell, this was their first performance as a quartet.) See our Samuel Bennett’s photos below.

Next week, See Through Dresses takes the Hear Omaha stage, sponsored by the Greater Omaha Chamber of Commerce. 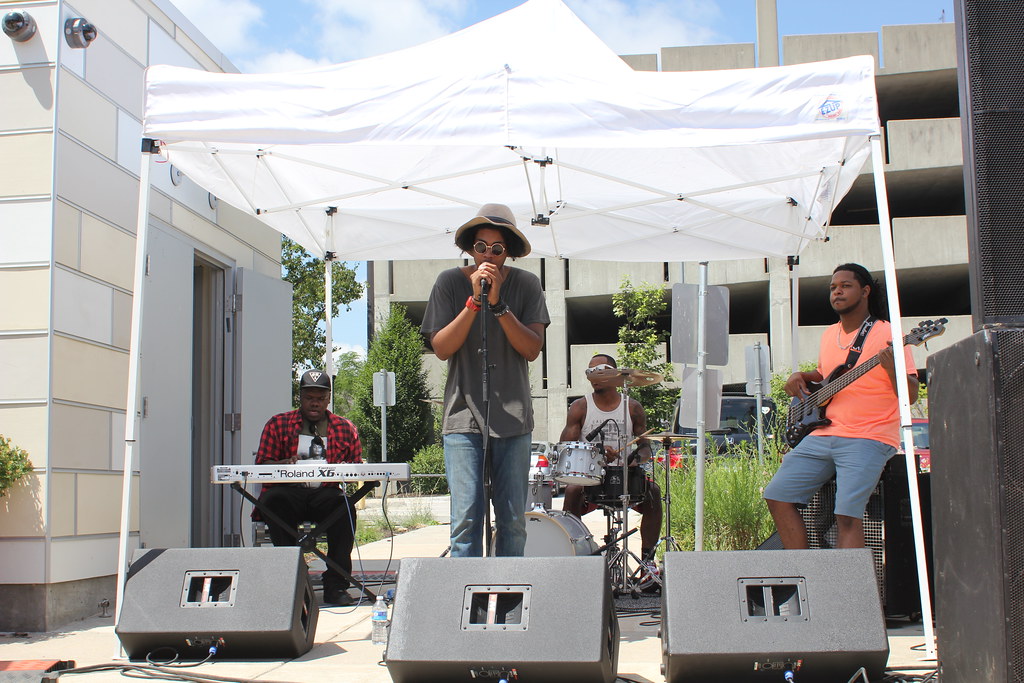 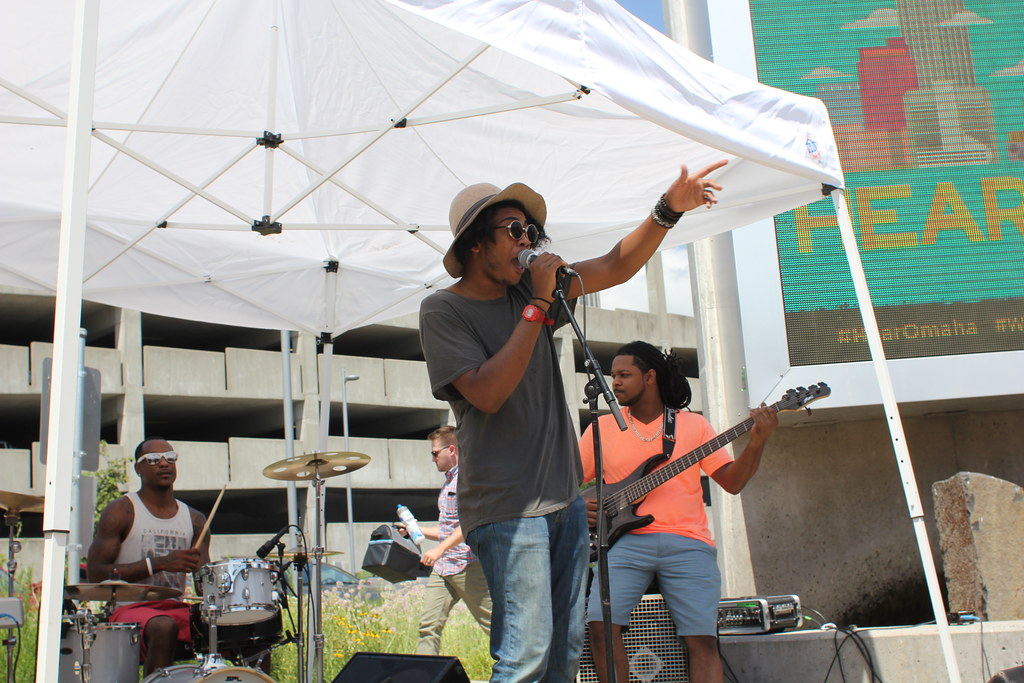 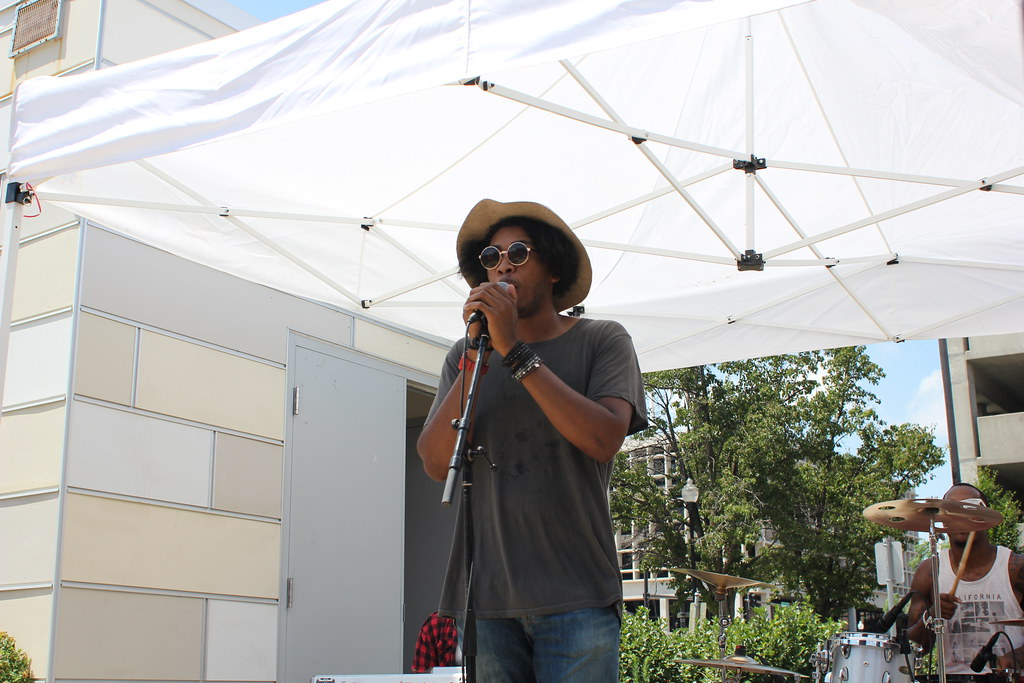 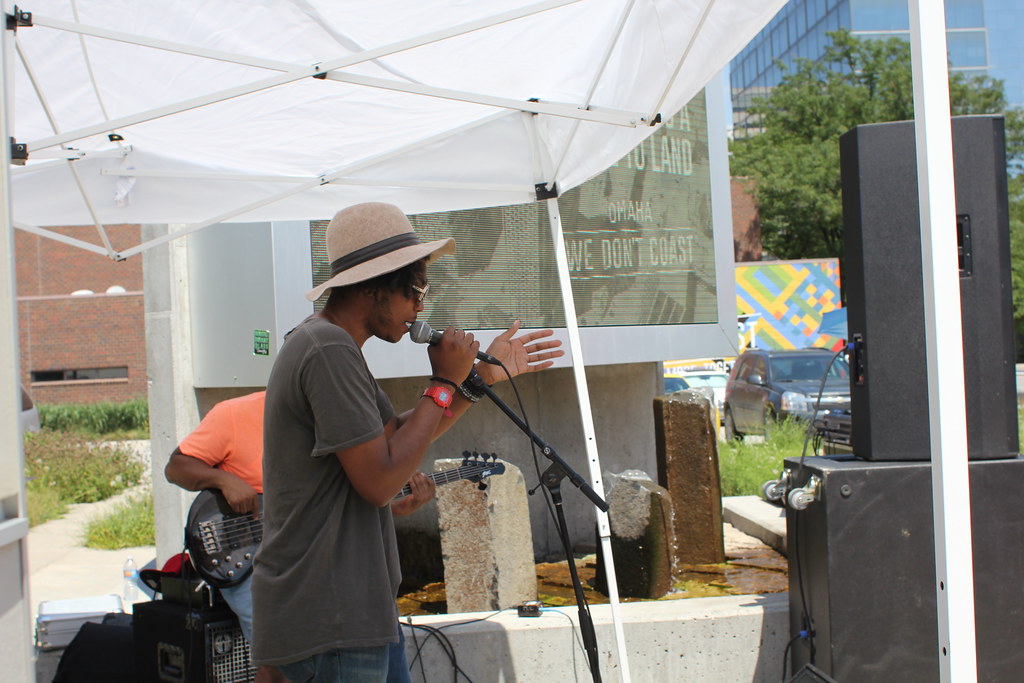 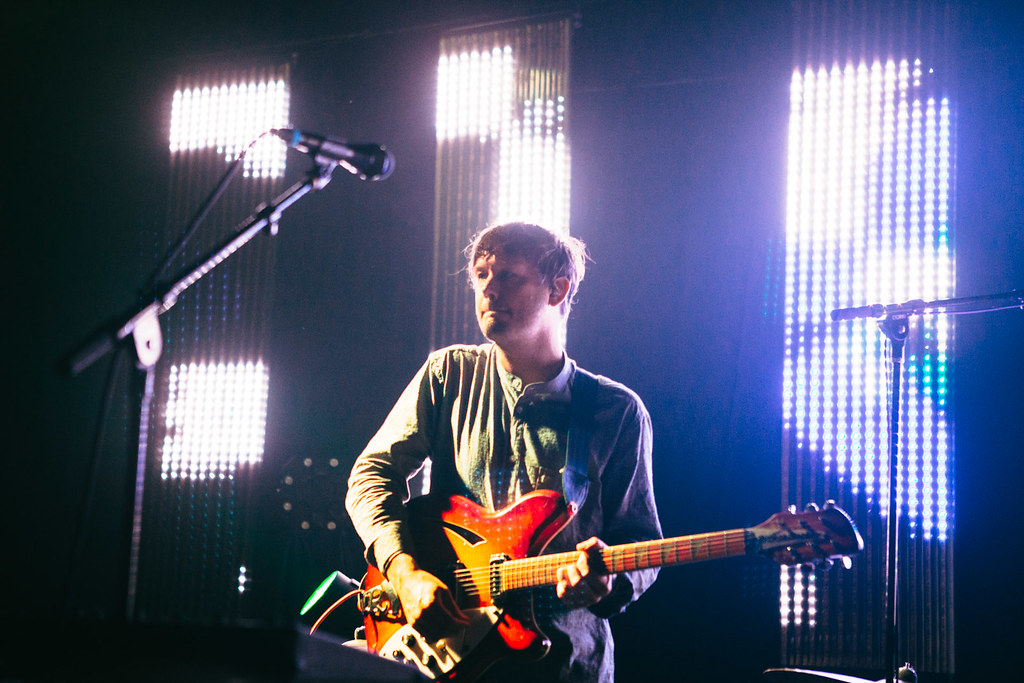 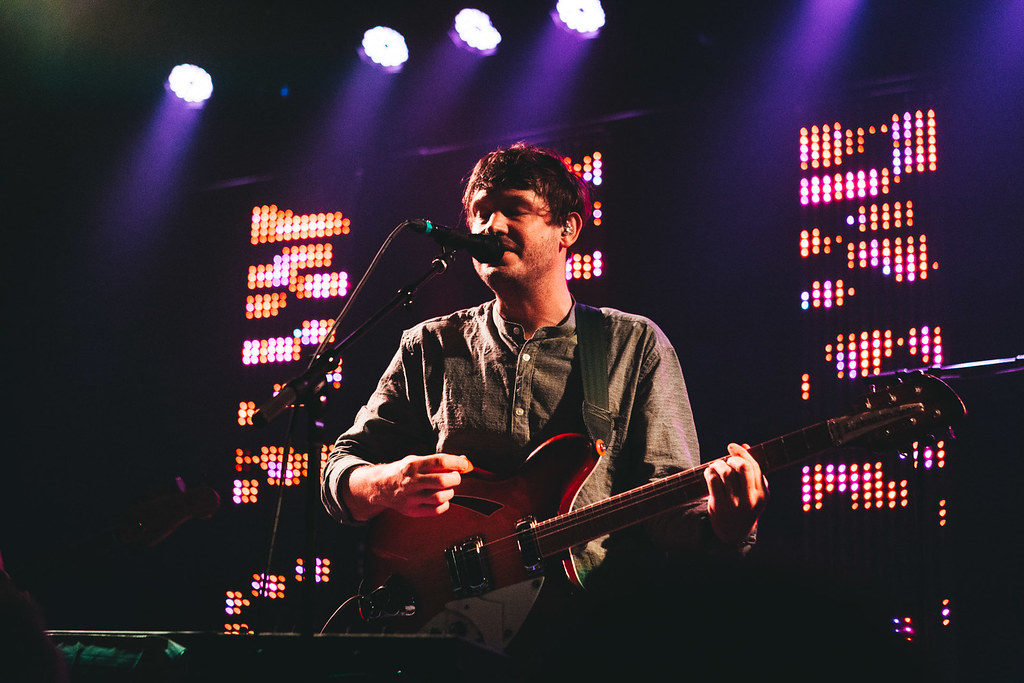 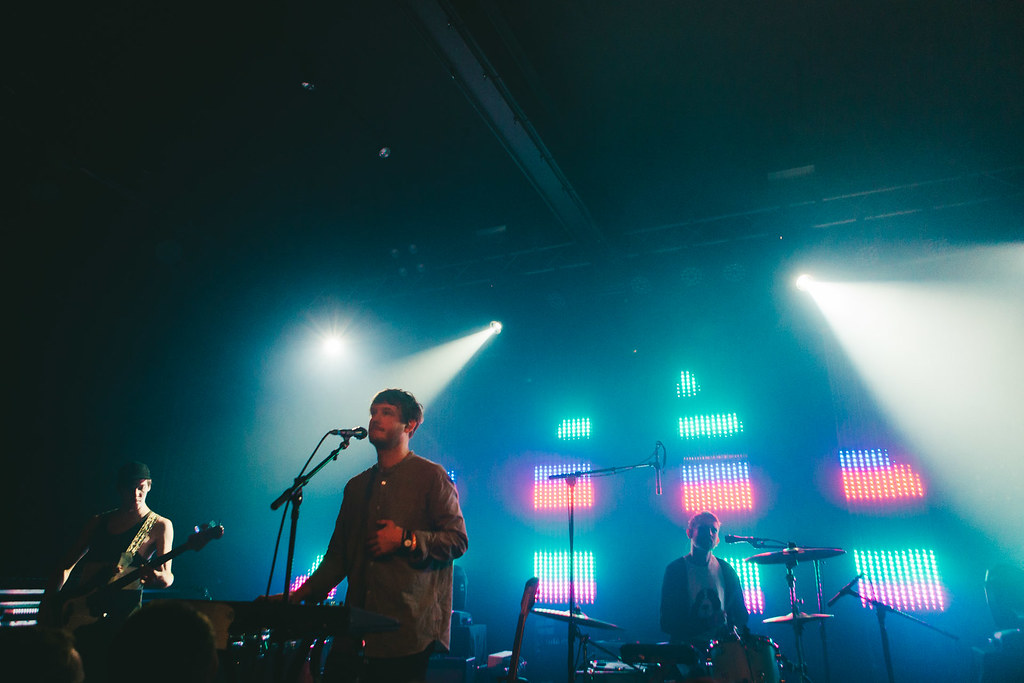 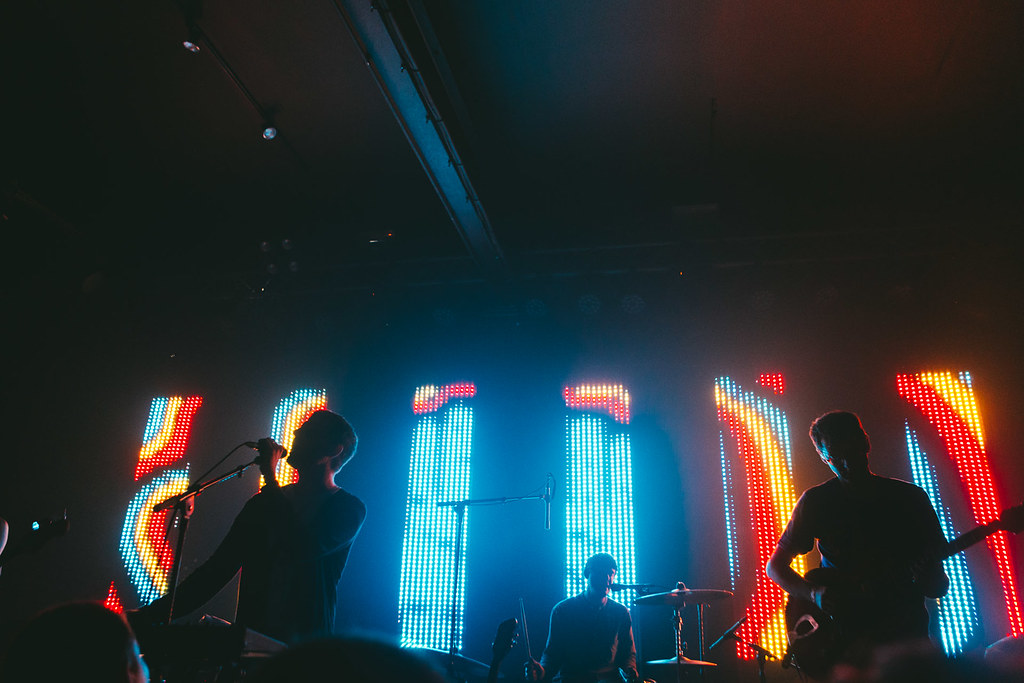 Another frequent HN contributor, James Dean, has recently spread his beat out to Omaha. Last night he was in the front room at Slowdown for Novelty Daughter, TV Girl and Omaha’s own State Disco. His photos are below: 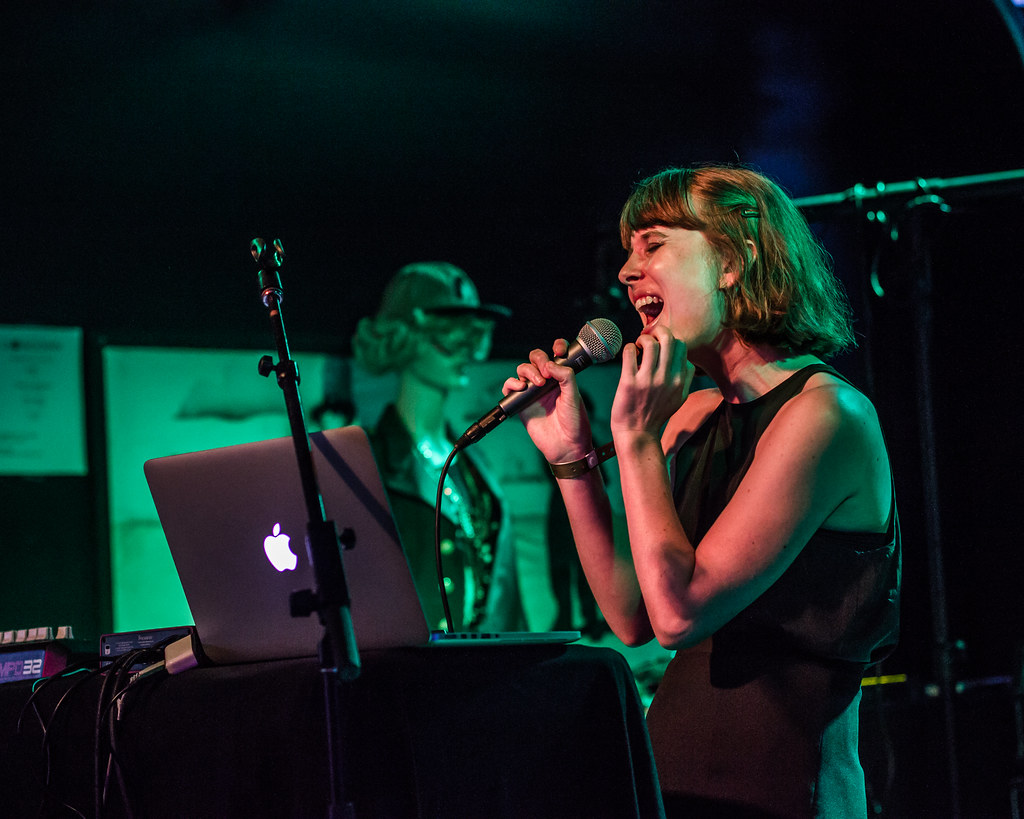 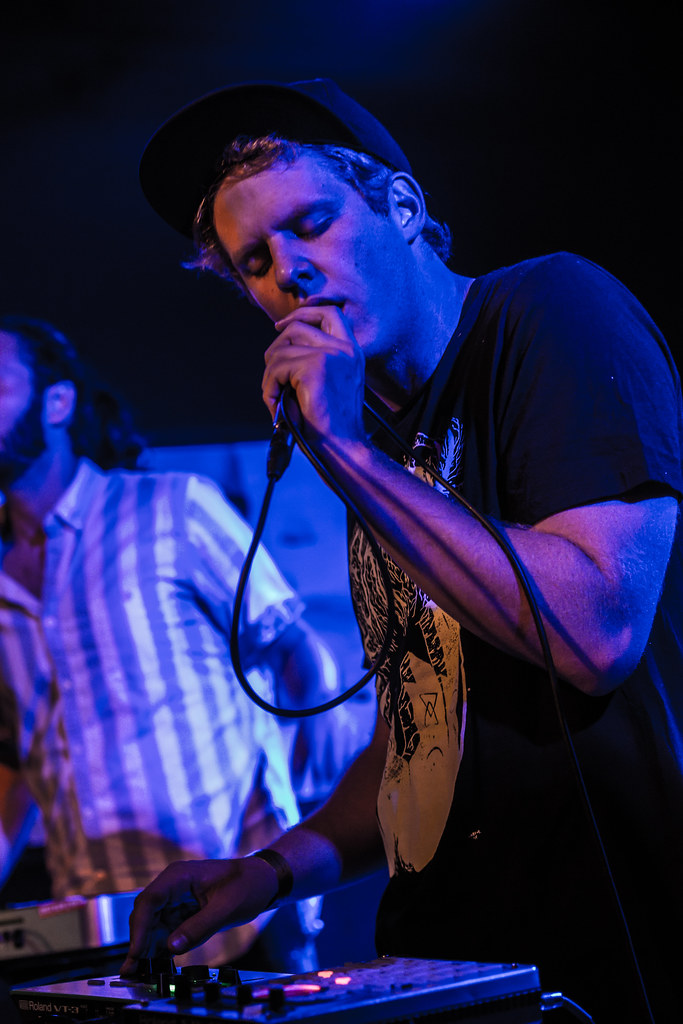 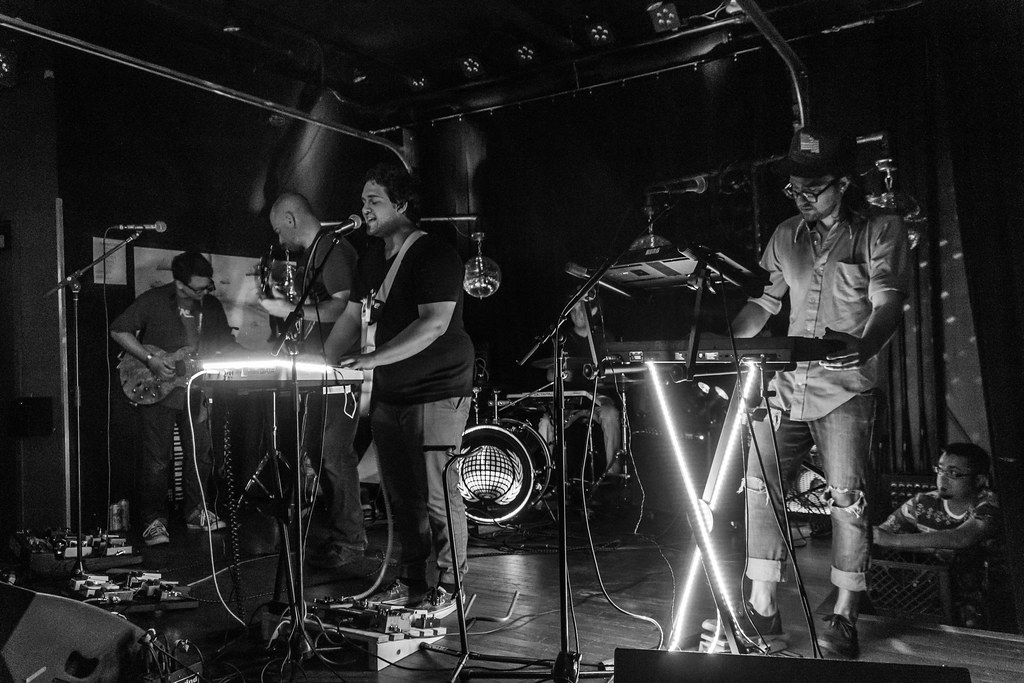 Ohio folk-rock singer/songwriter stopped at Reverb Lounge last night for what appeared to be a packed house. HN contributor Jeff Lawler wrote a few words on her performance:

“Lydia Loveless set the tone nonchalantly Thursday night at the Reverb Lounge with this comment:  “This is the last night of filming our documentary so please act like an asshole.”

Joined by electric bass, drum and two additional guitar players, Loveless blazed through a riveting set of alt-country. Loveless has earned critical acclaim for her albums, and for her genre melding approach to country and rock.

(If you want to dig a little deeper, check out Hear Nebraska’s recent chat with her to find out a bit about her thoughts on songwriting, which serves as nice companion to seeing her live.)

Omaha singer-songwriter Kait Berreckman opened up the show with a solo set. Sporting a Gretch guitar instead of the traditional acoustic, Berreckman entertained the crowd with songs featuring confessional lyrics combined with chunky guitar riffing. She also impressed the crowd with a number near the end of the set featuring a very robust kazoo solo.

After Berreckman wrapped up, Loveless and company took the stage to a crowd of more than 100. She opened with “Head,” one of the lead singles off her 2014 album Somewhere Else. Lead guitarist Todd May provided a layer of dissonant fuzz, giving the traditionally structured songs a touch of punk rock attitude. Bassist Ben Lamb and drummer Nick German provided an energetic backbeat to  “Wine Lips,” a bouncy number also off Somewhere Else.

In the latter part of the set, the band departed the stage, leaving Loveless to play a handful of solo acoustic songs. “Everything’s Gone” was relaxed and soulful, providing a pleasant contrast the more bombastic rock songs with the full band. After a brief interlude, the entire band returned to the stage, closing out the set with gusto.

Overall, Loveless’ unique approach to country music makes for a dynamic and invigorating live experience. She takes a very rock approach to a traditional style of music, and three guitars in a live setting adds a layer of complexity not typically heard in country music.”

To preview this weekend’s installment of the Film Streams “Sights on Sound” series, here’s Andrew Samson.

“As the war in Vietnam raged during the late 1960’s and early 1970’s, something interesting was happening on the fringes of the embattled country.

Just to the west, American culture had taken hold of young Cambodian musicians. After hearing rock music from the United States, England, and France, many bands were influenced to blend Western rock with their Cambodian singers.

But in 1975, just as the new Western-influenced musical movement was taking off, the Khmer Rouge decided that all signs of Western culture and modernity needed to be erased. Therefore, most of the music that was being created by young, vibrant rock musicians was outlawed by the government.

Don’t Think I’ve Forgotten: Cambodia’s Lost Rock and Roll tells the story of the musicians that survived the brutal Khmer Rouge. The feature, showing at Film Streams this Sunday, showcases the music that was created as well as the social and political effects that it had during the turbulent 1970’s. Because of their influence, artists were highly-targeted individuals.

“I told them I was a banana seller,” one interviewee says into the camera. “I was a singer. I lied to them. That saved my life.”

The turbulence in Cambodia during the 1970’s resulted in much of the music being lost, unheard of for years. The feature is a celebration of the music and a historical document to honor those who were persecuted for making their art.

Largely unknown to the Western world which had so much influence over the music, Don’t Think I’ve Forgotten shows just how important the musical revolution was to Cambodians.”

Shows are aplenty this weekend, so we’ll give you a quick rundown:

– Lincoln post-hardcore act Better Friend releases their EP Safe House tonight at an all-ages show at The Bourbon. See Through Dresses and Once A Pawn will support. RSVP here.

– Icky Blossoms rides to Omaha tonight to play an intriguingly eclectic billing with Plack Blague and Life Is Cool. Entry to the 9 p.m. show is $12. RSVP here.

– For the dancing crowd, Soul Club celebrates its two-year anniversary tomorrow night at Old Pub in Lincoln. It starts at 9 p.m. with DJs spinning until the bar closes down. Entry is $3. RSVP here.

– The Good Living Tour comes to a close tomorrow night in Grand Island. A powerhouse set features Icky Blossoms, AZP and Simon Joyner. Its free and open to all ages. Come get down with us (RSVP here).

As always, head to hearnebraska.org/events for a full listing of the weekend’s shows. Please feel free to email us (news@hearnebraska.org) with missing events, or add them yourself via the Contribute button at the top-left of the home screen. See you out there.