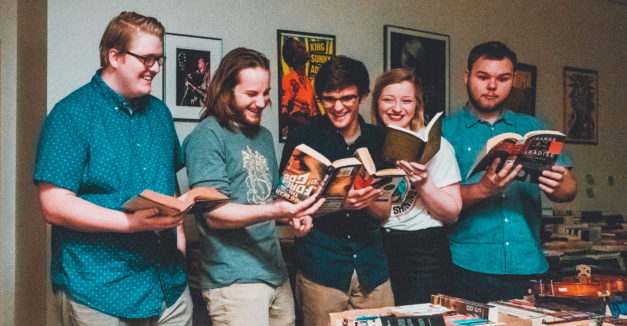 [The following script was read on-air, introducing The Wildwoods before the Lincoln folk band’s on-air performance on Hear Nebraska FM. Find the full session audio and a video of “Mason Jars below. Sweet Nostalgia drops at the band’s concert Friday night with Tragic Jack and Eli Mardock; RSVP here.]

There are perhaps few Nebraska acts that represent a merger of past and present quite like The Wildwoods, and if it’s taken you this long to notice, take the opening track of its new album Sweet Nostalgia. The young songwriting tandem of Chloe Pinkman and Noah Gose harmonize like something out of the Depression Era, fitted with a certain weight yet warmly and triumphantly capable of lifting hearts regardless. It’s not hard to imagine them in rotation between Kansas City’s Victor & Penny and the Soggy Bottom Boys.

During any performance in any space, from Branched Oak Farm to Zoo Bar, the group’s endless pep, beaming smiles and undeniably earnest folk add up to just one word: wholesome. It’s indicative of their roots, to be sure, both familial and of the Heartland. Chloe and Noah are engaged to be married, Chloe’s brother, also Noah, plays guitar and the three of them have played together since the early days — all facts that seem like they could either be the catalyst for or product of the rapport you hear in their reverential catalogue. Add in their already vast touring experience — more than 100 shows in each of the last two years, including Nebraska Folk & Roots, Flatwater Music Festival and noted folk summit Wakarusa — and the rest feels natural.

That Sweet Nostalgia is the third release for this young five-piece folk act is alone admirable, were it not for the effortless charm and youthful whimsy they bring to classic Americana. The arm-in-arm camaraderie of “Loose Threads” bops and sways like a Randy Newman tune. “My Friend” swells with countryside imagery and ornate instrumentation, aided by the production prowess of ARC’s Ben Brodin. “Bedford Street” is a good old-fashioned hoe-down. And no matter how tearful or worrisome things seem, the turn is always hopeful: trust is endless, love is everlasting, the strings are always in tune and the sun is always shining. Sweet Nostalgia, indeed.

Without further ado, I give you The Wildwoods, with “Way of Train.”