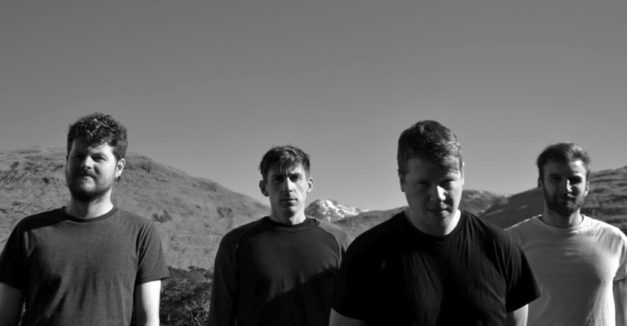 Adam Thompson pondered the question about his band’s sound for a minute.

“It’s rainy and miserable in Scotland,” the We Were Jetpacks Frontman says over the phone in his distinctive, undeniable accent, “and there are lots of angry people. In a way, that’s a big part of why our music sounds the way it does. It’s music that sounds sort of like that.”

He paused. Another reflective moment.

“We really just love playing music together,” Thompson says. “At the end of it, we are just four pals touring together. We get up on stage and we make music that is ours and it just works. A lot of people see that and they like it. That’s the focus for our new music. We’ve just realized that we want to be who we are.”

Anyone who has listened to We Were Promised Jetpacks – the four piece Glasglow indie post-punk band of which Thompson is the vocalist – will know immediately what he’s on about. The band is best defined by its pensive and moody undertones; songs contract and swell in volume, texture and dissonance like a deep breath of wintry air. Their first album, These Four Walls, introduced their style to the world with tunes like “Keeping Warm”; their newest effort, Unraveling, has refined and expanded on it with songs like “Safety in Numbers.”

But it’s not so cut and dry as to how We Were Promised Jetpacks has maintained, perfected and created variations on its rocking, dense, symphonic style. Across its newer and older works, the band’s trademark sound — the emotive jams, vocal soliloquies, and rising tension and release in its compositions — has remained its cornerstone because of the overarching desire to own a unique creative identity.

But unlike some bands, Thompson did not feel a strong pull from his homeland in the band’s music making.

And they’ve been busy doing that. The band dropped a new album titled Unravelling in 2014, and are on tour this summer and fall, playing shows across the United States and in Germany. It plays Omaha’s Slowdown on Monday, June 6th as part of its tour. But above all, according to Thompson, they have been writing.

“We have been keeping busy with shows, but we write a lot,” Thompson says. “We are constantly writing and recording, and it’s really nice to be back to it. It’s nice being close to home in that sense.”

Thompson added that concertgoers can expect to hear some of We Were Promised Jetpacks’ new works that will make up its next album. Thompson said that live performances and writing while on the road have been a key element of his vision of the band, its music and its future.

“I am really starting to enjoy playing live,” Thompson says. “The more you play, the harder you realize it is. It’s hard to continue to create new music that really makes sense, is creative, makes everyone in the band happy. I am starting to cherish those moments more.”

And it is clear that has been the overarching focus of their newest international tour: making music that is their own, that makes them happy and expands on their identity.

So, We Were Promised Jetpacks’ Slowdown show seems to Thompson a checkpoint – a spot in the band’s history where it defines itself not along the lines of what it’s done, or what it should do. Nor is it a salute to the past, or even a beacon for the future. It is an expression of what it means to be a part of four Glasgow high school friends bound together creatively a strong, shared idea for the music they want to make.