I imagined all the music notes, all the printed words in newspapers and flyers, those on the Web and in liner notes, everything swirling around like atoms in a particle accelerator. Something was bound to collide to create something new.

Nebraska's musicians, journalists, promoters, friends and family met at The Library on Sixth Street, filling the back of the bar with conversations about day jobs, marshmallow cravings, tours and honest reviews of South by Southwest shows. We were without our usual instruments, but it was the most comfortable spot in all of Austin. 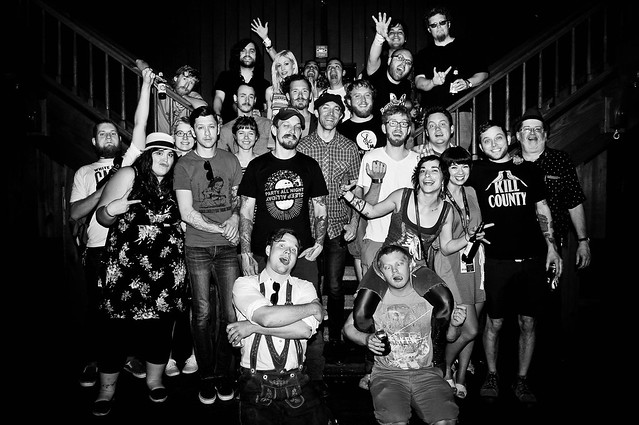 The Hear Nebraska crew had started our Friday afternoon by stopping. The keys were locked inside the car (passive voice to conceal the doer's identity), but we took it in stride. I left the group for Glen Hansard at the Stage on Sixth, and along the way I saw Orion Walsh with Bolzen Beer Band's Brian Brazier and Dave Socha.

They'd just finished busking together at Sixth and Congress. Missing the melding of protest folk and punk polka was a definite disappointment, but Walsh said he'd been on the street corner since the early morning. A true troubadour on tour, he's been on the road since Feb. 15 and is hitting stops in the Southeast and New England before cutting back through the Midwest and returning to Nebraska on April 19.

Pleased to see Orion Walsh and Bolzen Beer Band at the corner of Sixth and Congress at #sxsw. Yes, they are jamming, somewhere else now.


I made it to Sennheiser and Paste's party a bit early, ordered a Rolling Rock (don't ask) and took my glasses off as I sidled up to the stage a bit blind. Sharing similar facial features and red hair, I thought I'd act the part of Hansard if only to be a creep. He came on the stage with a smile in his holster and shot it off when he said this first song is for those "playing their fucking hearts out on the street."

He mentioned he'd gotten drunk by accident the day before, ending the night by losing his dinner on his boots at the Bruce Springsteen concert — "I'm Irish, I should be able to fucking drink." As he began machine-gunning his guitar, showing the large holes picked away, it signaled the early evening sun-breaking-through-the-clouds moment of, "Yes, I made it through the hangover."

He played an original to open the set, and his reddening face would grow crescendos as he held out notes. A thundercloud of distorted strumming erupted at the end, and he lost his beanie in the storm. He played "Low Rising" with a bit of "Sexual Healing" slipped in, and encouraged the crowd to sing along saying, "I'm just one guy with a guitar in all this noise."

His third song honored Springsteen with a cover of "Drive All Night." Not wanting it to end, he riffed on the Chi-Lites' "Have You Seen Her" substituting in "Baby, can you feel it?" and joked about how he was an Irish folk singer pretending to be his soulful saxophone player, Jake Clemons, who also plays in the E Street Band.

Next up was Van Morrison's "Astral Weeks," and with a bit of a history lesson on St. Patrick in between verses, Hansard said he was bringing the snakes back to Ireland. His snare-drum-roll guitar exploded in the interludes, and he joked, "Yes, I know I'm supposed to be promoting my own music, but I'm having so much fun up here."

Since I was camera-less, let's just say it went a little something like this:

As it was the 10th anniversary of his father's death, Hansard closed the short but sweet time on stage with "A Parting Glass," a traditional song told from the perspective of the corpse at a wake. The crowd turned Irish a day early, joining in on the a cappella chorus. After he downed his own parting glass of whiskey, Hansard stepped down, and I met him to impart the true story of my first beard: He inspired it. "I just cut mine," he said. "I'd been wearing the 'I hate women' kind."

Taking my glasses off for Glen Hansard. This lookalike has to be convincing. Also, I am excited as all get out. Seriously, get out, people.


I walked down the street to our Nebraska music meetup and talked shop with Walsh, met a few familiar faces and told Eli Mardock my off-the-record review of his show the day before — not too far off from what had been published here.


Most of us then made the jaunt down to Lamberts for the Saddle Creek showcase with Icky Blossoms, Big Harp and the Mynabirds. Machete Archive's Saber Blazek played bass brilliantly for Icky, and his James Brown feet fit in well with the group's compulsory dance songs. I couldn't help but smile seeing how easily he matched the band's aesthetic, singing along without a mic whenever the spirit moved him.

Clark Baechle laid down the beat, and the three core members — Derek Pressnall, Nik Fackler and Sarah Bohling — laid down the sex. Yes, the more spoken-word vocals were soaked with sweat, the kind of broken-air-conditioner-on-a-hot-day feel. Fackler did his best Jimi on his knees at the end and bent the mic down to join the other two in killing it without remorse. As they posted this morning, they're slowly recovering.


Big Harp was challenging, especially being juxtaposed with the accessibility of Icky. Their back catalog of sweet songs for songwriters stayed at home, all except one at the very end. It's just a guess, but considering the first seven or eight were strung together by a theme played five times over, I'd venture to say we heard a nearly full preview of the band's next release.

The husband-and-wife duo of Chris Senseney and Stefanie Drootin-Senseney, backed by a drummer, said not a single word in between songs, and hardly let a second of dead air go by. Chris sang, "It's easy to be strange," as he stared over the crowd and played spectacularly jittery guitar. Even off-the-beaten-path time signatures like 7/8 made their way in, and the closer "Out in the Field" understandably prompted the warmest reception.

We think @bigharp played a good thirty minutes of new material connected by one interlude played five times before ending with an old one.


The Mynabirds brought the crowd back with their rocking revival. After kicking off their tour at The Zoo Bar in Lincoln then looping through the West Coast and Texas, it seems the band is finding its groove. Frontwoman Laura Burhenn had flown in her band from all parts of the country and practiced them for upwards of 10-hour days. The work shows.

Wearing a custom-made flowing romper and striped fingernail polish, Burhenn led her band through the new material with a couple old ones mixed in. Her heeled boots stood atop a stompbox no longer bearing the paint of Tilly and the Wall but given a fresh coat and The Mynabirds label. A piece of tape with "Bright Eyes" scribbled on still adorned the keyboard stand, testament to the gloriously incestuous nature of the Nebraska music scene.

"Hi everybody, we're The Mynabirds from Omaha, Neb." #sxsw twitter.com/hearnebraska/s… 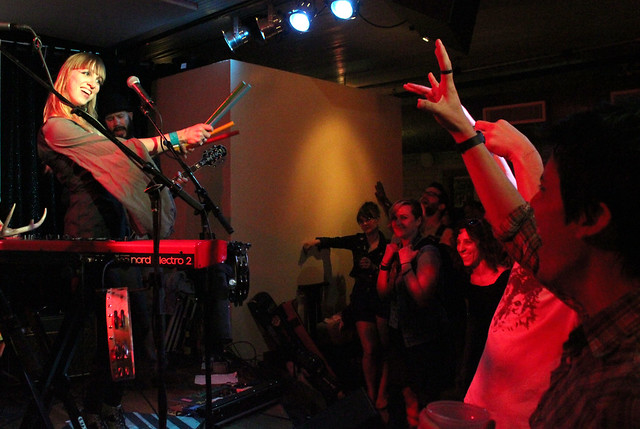 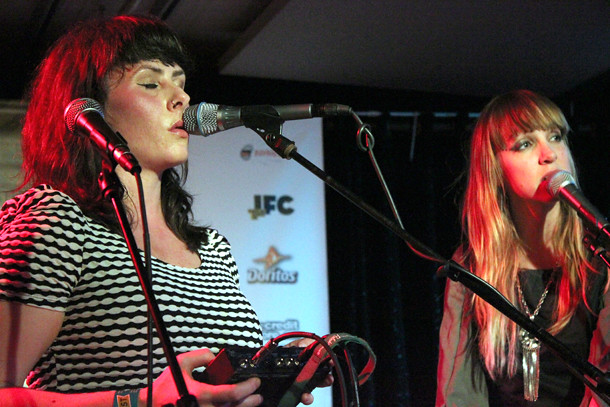 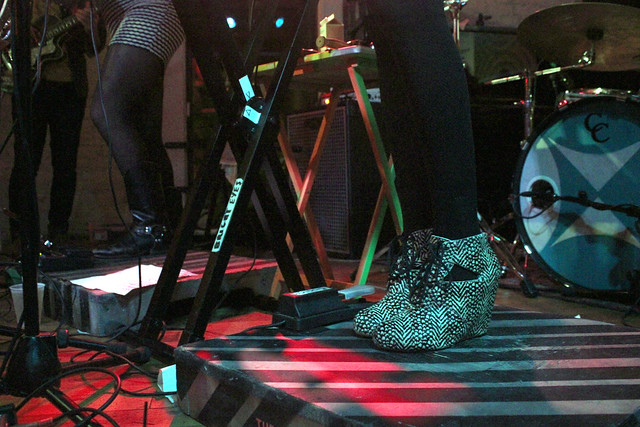 In comparison with the first few hours of my Friday, the rest of the night was underwhelming. I stopped by the Austin City Limits set to see Bomba Estereo, a set of Spanish dance music with rapped vocals, which, pardon the pun, didn't translate well to live performance.

I saw Daughter at St. David's Historical Sanctuary, and the awkward banter speaks for the music: "Hi, we're Daughter. It's nice to meet you. This song is about death." Still in search of world music, I also tried for a Peruvian band called Campodinco, but the words were disappointingly in English and buffeted by an electrified 12-string. On to Tom Morello I went, and after his political folk blindsided the large crowd with little lyrical inventiveness, I gave up after about four songs. Shannon Claire stuck around and had an entirely different experience. 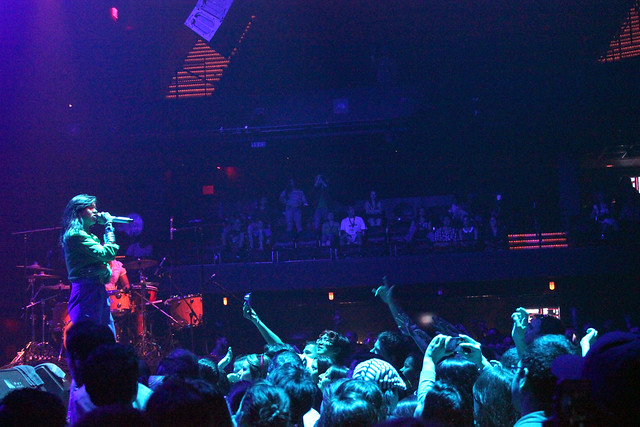 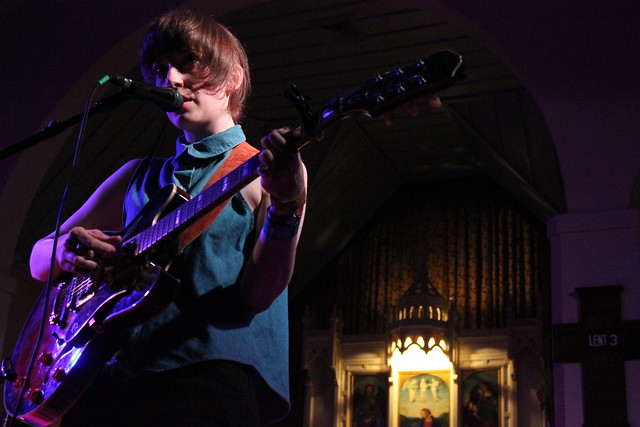 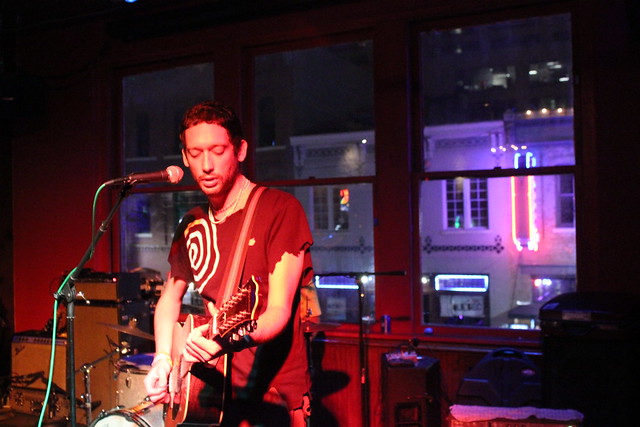 Thankfully, I had 20 minutes to spare at the end of the night and dropped by The Speakeasy for Balkan Beat Box. Thing is, Balkan Beat Box hadn't made it to Austin yet, so the substitute Debo Band packed the stage with its nine members on violin, accordion, saxophones, guitar, trumpet, drums, vocals, bass and god knows what else. It was a fitting get-down-with-your-bad-self end, and the singer topped it all off with worldly dance moves complemented by a couple folks in the crowd. 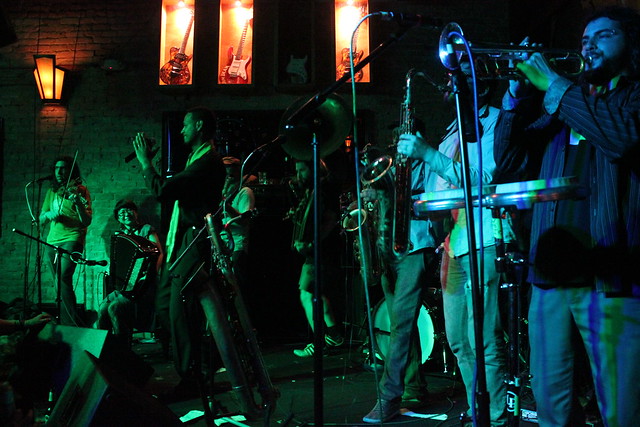 Catch the final day of South by Southwest as seen by Hear Nebraska either as we drive back with our mobile workstation, the Normans' trusty Volvo, or if the road trip sends us snoring, find us here on Monday morning with the recap.

Michael Todd is Hear Nebraska's managing editor. He wanted to have the Peruvian band from Lima sing "Feliz Cumpleaños" and record it, but it wasn't meant to be. Reach Michael at michaeltodd@hearnebraska.org.