Two words come to mind as Jeff Ankenbauer thinks back on a few of his past bands.

He speaks about his storied past in the Omaha music scene as just that: the past. Now as he nears his 30th birthday, Ankenbauer talks about his new band, Pleasure Adapter — playing Slowdown on Thursday night — as a sort of rebirth. He's had to grow up, especially since his family of three will soon be four.

No longer will he be "a hard person to deal with." He says, "I have mad respect for everything I’ve done," but chances are that blood won't run down his forehead on stage again, as it did at one of The Shanks' final shows at O'Leaver's.

Pleasure Adapter is the project that followed 11 months of Ankenbauer in his basement, he says, months he spent "listening to weird prog rock, electronic music, and a lot of power pop and a lot of '80s music: a lot of it." The band started to come together after Ankenbauer's wife told him, "Why don’t you start playing music again because you're going nuts."

And so, Ankenbauer invited Joey Koneko to play guitar first; later Koneko took up drums. Ankenbauer then ran into Annie Dilocker (ex-Digital Leather) at Homer's, where he asked her, "Do you like Echo and the Bunnymen? Let's start a band together." Dilocker started playing keys, and the band became whole when Ben Allen of Watching the Train Wreck and Peace of Shit joined on guitar.

Ankenbauer says Pleasure Adapter is a big step away from anything he and Allen have done. He says, "It's like if Jeff Ankenbauer took a time warp from 1998 when he was a junior in high school when he was just learning how to play music, before he drank or did drugs. If he just time-warped into here and knew all the influences (such as The Carcinogens and The Street Urchins). … I just wish I was a teenager and could play the music I'm doing now, instead of doing all the things I hated that I used to do."

The band name Pleasure Adapter, Ankenbauer says, is about exercising your brain. Song lyrics talk about Omaha culture: "That’s right, they’re cool, nothing but fools," from "Everything Has Been Erased," he says, is "about people judging me, judging what people do in Omaha because I’m more about community than everyone holding a knife to everyone’s throats. I would rather just have everyone get along."

"You see my face staring into empty space," another line from "Everything Has Been Erased," is about people looking at their iPhones or iPads and not looking at what they need to. "I look at my kid," Ankenbauer says. "It’s importance over stupid shit." 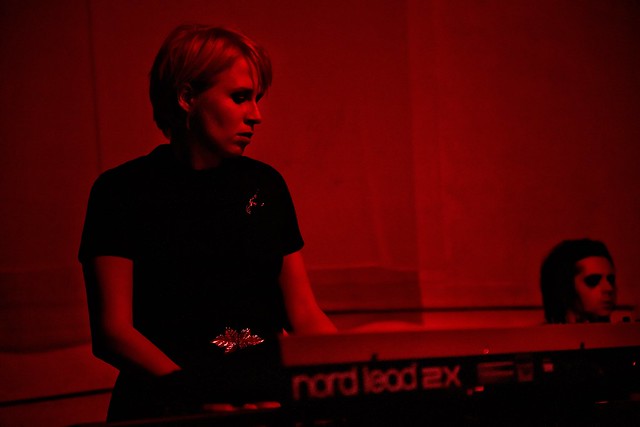 Now as Ankenbauer continues to grow up, he's placing more importance on family and creating the music he needs to create. He says he's moving past the nearly 12 years of "wasting away" where he was in bands, but he wasn't being creative — "I have really good musical tastes, but was I being creative? No."

Above all, Ankenbauer is accepting his life at this point: "A lot of people in Omaha just look in the mirror and they don't understand who they are. And for a long time, I didn't understand who I was, and that's why I struggled. … Everything that you ever thought or did or had done or feel bad about, you kind of just forget about it. You have to accept it."