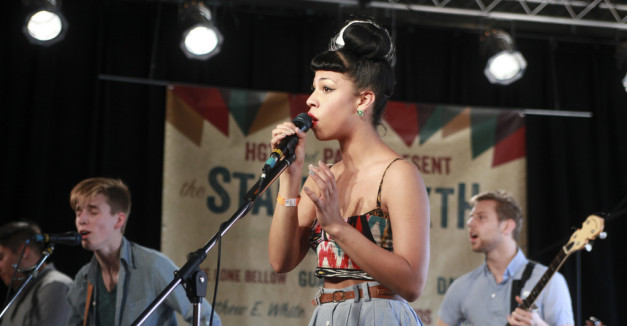 There was a 50 percent chance that Phox wouldn’t make it.

When the Madison-based band’s computer, which contained its 30-minute video EP, crashed, the group was told it could all be lost.

The colorful circus of scenes from their film would have been lost and the band may not have grabbed the attention of prominent news outlets (NPR, Entertainment Weekly, Consequence of Sound) and gained the thousands of fans they boast today.

“If that coin had landed on that other side, we wouldn’t be a band right now,” says Matt Holmen, lead guitarist and trumpet player for Phox. “Well, we would’ve, but we wouldn’t be in the same place. We wouldn’t have reached out to as many people.”

Luckily for them, the video was recovered and went on to garner tens of thousands of views from YouTube and Vimeo.

Word of mouth and exposure from Phox’s EP helped the band tour internationally and play major music festivals before even releasing their first album.

Phox’s self-titled debut album will be released on June 24, the same day their national tour kicks off at The Waiting Room in Omaha. Tickets are available here.
Singer Monica Martin is responsible for the lyrics on the 12-track record and for the bubbly, bouncy melodies that have helped dictate the direction of the band, Holmen says.

Though recorded and mixed in about a month at April Base Studios, Bon Iver frontman Justin Vernon‘s home studio in Eau Claire, Wisconsin, the band’s debut album was nearly two years in the making.

The origin story of Phox begins in Baraboo, Wisconsin, the hometown of the band’s members. After leaving the town post-high school to pursue various schools and careers, the sextet found themselves coming back home at the same time and creating a band together.

The members moved to Madison where they lived together, recorded, rehearsed and discovered their evolving sound.

“Our disagreements are usually over the dishes, not the music,” Holmen says.  “We’ve figured out a way to have this ongoing conversation and no one is ever totally satisfied, but everyone is aware of what each other respects and what is due, which is being represented in the group and contributing.”

Wisconsin has remained an integral element for the sextet’s imagery.

The band recently filmed their forthcoming music video for “Kingfischer,” on a friend’s rural property in Baraboo and enlisted band member Zach Johnston to direct.

The cover for the band’s album is an image from their Madison home — a mantle with various knick-knacks from each member.

On the phone two weeks ago, with a nationwide tour looming, a week left on the lease and most of the members moved out, Holmen says the jumble of objects, including a jackalope head, a photo of Martin’s dad and a clown-decorated brandy bottle, remained.

Though their EP was recorded in their Madison home, Phox recorded their album at April Base, Bon Iver frontman Justin Vernon‘s home studio in Eau Claire, Wisconsin.

The recorded was produced by Brian Joseph, a recording engineer who has worked with Vernon on multiple musical projects including Bon Iver and The Shouting Matches.

Holmen says the engineer was looking for someone with good tastes and people with their head on straight.

“One thing that he commented on early on was, he said, ‘You guys don’t have too few good ideas. I’m always kind of whipping my head around in every direction when listening to a song.’” Holmen says of Joseph. “And he helped us bring a little more focus to it. He’s a little more restrained, maybe.”

Choosing songs for the album meant choosing between old and new material to find what was the best fit for the group.

“Some of them didn’t make it because they weren’t our best,” Holmen says. “There are a few songs we recorded that we haven’t released yet but those will be coming out this year, or early next year. Some songs just didn’t represent where we’re at right now. They had to go by the wayside until we rearrange them or make them current to us.”
Though it did make it onto the record, 1936, was an older song the band changed until the last minute. The second single from the band, a favorite of Holmen’s, starts off with the gentle plucks of a guitar before Martin’s vocal harmonies arrive.

The constant energy and state of change is evident in the band’s sound and in their videos. In their video EP, band members switch between guitars, banjos, the trumpet, the clarinet, pianos and ukuleles as Martin’s feathery vocals float atop the instruments and confetti swirls around them.

In a November interview with Hear Nebraska, Martin described the chaos of the band as purposeful.

“I think you can have something be chaotic and also have clarity,” she said. “There’s so many things happening that we like, but without a little bit of focus, it can turn a little bit gray.”

Holmen, too, says he embraces the disorder with which Phox has come to identify.