John Ziegler will not upgrade. He’s held onto an old flip phone for six years. That way, the National Security Agency can’t hack him, he says.

Last April, he decided to take an indefinite social media hiatus, and he stopped logging onto Facebook.

And as far as his Omaha band The Lupines is concerned, nothing can compare to the “smooth, sweet” sound of recording to tape. They like to record how the bands of old did it — no digital editing or artificial sounds. Just a band playing their music.

“It’s just the band playing its parts,” he says. “Like it should be, right?

As singer, guitarist and songwriter, Ziegler says he only writes music that he wants to hear for The Lupines. On their new six-song album Over The Moon, he isn’t trying to be revolutionary.

“I don't care what other people do, if I appraise my sentiments honestly, yet I expect everyone to rejoice when I fart,” he says. “I'm kinda past being discouraged when that doesn't happen, however, because I'm still going to create things, and I still feel like I have this song-making thing dicked, to a point.” 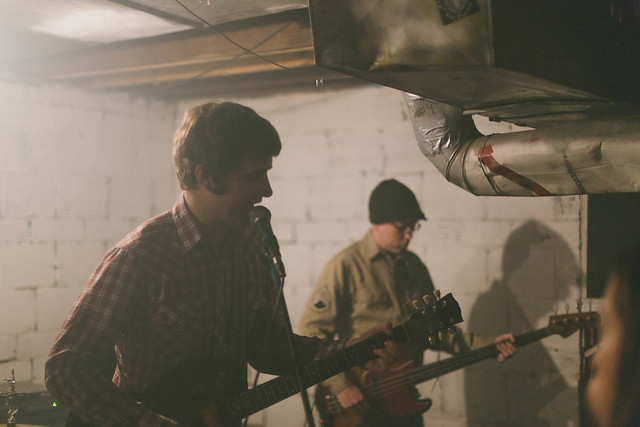 This Saturday, The Lupines will celebrate the release of Over The Moon at O’Leaver’s Pub with Bullet Proof Hearts. It will be the first release featuring The Lupines as a four-piece — not just Ziegler’s studio project.

In 2010, the band was born as a one-piece in Lincoln’s Plan C Studios (now Dream Pro Recording) when Ziegler’s former garage-rock band Brimstone Howl couldn’t make it to the studio. With his time already booked and paid for, Ziegler recorded all of the instruments and vocals for eight songs that would later become the band’s first EP I Blame Creation, released in May 2013.

The release of Over The Moon represents a new era for The Lupines. The album still features fuzzy guitars dipped in reverb and distant, roomy vocals, sounding as if they were shouted through a megaphone. But although five of the songs on the record are re-recordings of tracks on I Blame Creation, such additions as a variety of drum patterns help it depart from the rhythmic repetition of The Lupine’s first release.

“On I Blame Creation, I was just plodding along on the drums, pass/fail,” Ziegler says. “With Javid on the kit, there's some really sweet stuff. He kills it.”

With songs boasting simple three-chord progressions, Over The Moon proves that music can be uncomplicated while being catchy and captivating. Guitarist Mike Friedman’s complex guitar licks add an extra kick to the songs. And the sound of the album is nicely rounded out by bassist Mike Tulis, who Ziegler refers to as the always level-headed “spiritual guide of the band.” It’s all topped off with Ziegler’s storytelling served by a blend of loud and assertive vocals.

Over The Moon, Ziegler says, is more or less a concept album loosely based off of a book he read in fourth grade called Tuck Everlasting. The album follows a girl who leads her lover to a fountain of youth, and the story unfolds throughout the album, though it darts here and there from an expected path. Ziegler likens the twists and turns to a mathematical term for an ongoing, non-directional surface.

“The album is textured and multivarious, contradicting, like a Mobius strip,” he says.

In the months since the release of the band’s first album, Ziegler says he hasn’t changed very much as a person. If anything, he has reaffirmed his no-nonsense beliefs such as recording to tape and shunning the internet.

The band sparsely uses a Facebook account, and Ziegler says he wants his band to be judged by the music they write: nothing else.

“People aren't going to care what you do,” he says, “unless hype lightning strikes or you sell part of yourself to a movement or trend or to the gross slave work of networking and social media.”

Better listen to The Lupines live.

Sean Holohan is Hear Nebraska’s editorial intern. He also had a flip phone less than a year ago. Reach him at seanh@hearnebraska.org.