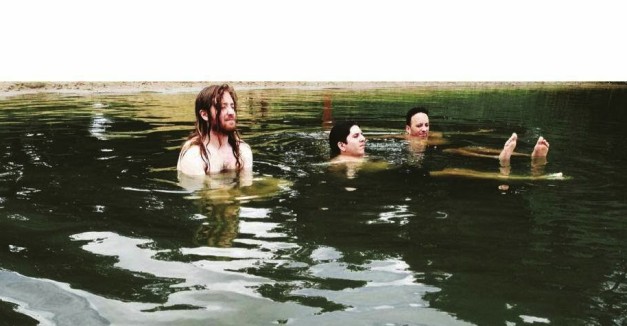 In 2007, a Sufjan Stevens essay made the rounds disparaging a genre of music he called “Friend Rock.” “It’s very simple,” he wrote, “You are going to a show not so much as a fan of the music, but as a fan of your friend, the musician, on stage.”

It was an embarrassing read because it seemed to implicate anyone who wasn’t famous enough to have “real” fans in the exhausting, boring, and ultimately un-friendly habit of putting on shows that become a chore for your acquaintances to attend.

The band Lithuania is a band of friends, from a scene of friends. (Full disclosure: I am friends with Lithuania drummer Ricardo Lagomasino.) Philadelphia right now is one of those places that is so fertile and mutually supportive that it gives Friend Rock a good name. In Philly, you go to your friends’ shows both because you are fans of the music, and because you’re fans of your friends.

“It’s funny that Philly has such a friendly music scene, because it’s really not a friendly place,” says Dom Angelella, who shares lead vocal duties with co-founder Eric Slick. “It’s not like New York, where everyone’s trying to make it – although not everyone in New York’s like that. It’s like the perfect size scene for people with that mentality – not too small, not too big. And it’s cheap. If you can’t afford to do it in LA, you can do it in Philly.”

Angelella and Slick, who have both achieved success in their own bands, DRGN KING and Dr. Dog respectively, met long before either of those other projects took off. They were both jazz students at the University of the Arts in Philly.

“Back then, music schools didn’t have technology programs or degrees that reflected the current way music is made. It was basically, if you were good at your instrument and wanted to study music, you went to jazz school.”

The two both felt out of place in the program, but found kindred spirits in each other. In music theory class, they bonded over John Zorn and the Dirty Projectors, forming the basis of a friendship that, ten years after writing their first song together, has finally borne fruit in the form of Hardcore Friends, Lithuania’s first LP.

Hardcore Friends couldn’t be further from jazz. The fast, fuzzed out music has more in common with Japandroids than anything. Standouts include “God in 2 Persons”, “Pieces”, and title track “Hardcore Friends”, which features Hop Along’s Frances Quinlan on guest vocals.

Friendship is a big theme on the album, which is sequenced chronologically and follows the arc of Angelella’s and Slick’s friendship.

“We’re basically talking about ourselves and each other. We know each other so well. It’s a chronicle of being buddies, dealing with stuff together, having a support system, and the positive qualities of having someone you can trust.”

It has been a good year for Lithuania, thanks to friendships the band has developed in their years in the Philly scene. They’ve done significant runs with mewithoutYou and Hop Along, and are now supporting Beach Slang on a tour that puts them at Oleaver’s on November 5 (RSVP here).

When I spoke with Angelella, the band was driving through the mountains of West Virginia toward Nashville. The night before, Halloween, the band had played a covers set based on Lollapalooza ’94. Dressed as Count Chocula (Slick), the Trix Rabbit (Angelella) and Tony the Tiger (Lagomasino), Lithuania ripped through a set of Smashing Pumpkins, Green Day, Flaming Lips, and Beastie Boys songs after only one practice.

“They were all songs we knew. They were kind of in all our wheelhouses,” Angelella said.

As the tour winds through all of the United States and parts of Canada, the band will be crashing with friends whenever possible.  “It’s so great to see people you haven’t seen in a while, and the more touring we do, the more we get to hang out with people in other places,” he said.

With members that tour in more than one band each, Lithuania has developed tricks to keep from burning out on the road. “You can’t make your home life totally different from your touring life,” Angelella said, repeating advice he picked up from a fellow road warrior in Pittsburgh. “When I was younger, I would think, ‘oh, I’m on tour. I’m going to go crazy and party,’ but within the last year I’ve learned that you need to have the same routine as your normal life.”

His bandmates have been a good influence in that area. “Eric doesn’t drink, and Ricardo is just rock solid. I’ve learned a lot from those guys. They’re so professional. It’s really great being out with them.”

A dark moment on the band’s recent tour with mewithoutYou had a silver lining thanks to new friends, St. Louis band Foxing. After a show in Austin, half of Lithuania’s gear was stolen out of Foxing’s van, along with all of Foxing’s.

“It seemed like a hit. Foxing was staying with their singer’s sister in a really nice neighborhood and someone just followed them home and just went for it.”

“When Eric got the phone call, he looked so upset, it felt like someone had died,” Angelella said.

Thankfully, one of Foxing’s fans heard about the theft and set up an Indiegogo campaign to help them replace the gear. Foxing made sure Lithuania was made whole.

“They didn’t have to do that, but it was awesome. They’re such good people. We had never met them before that tour, but they’re friends for life now.”

Lithuania plays Oleaver’s on Nov 5, after Worriers and before Beach Slang.

Hardcore Friends is out now on Lame-O records.

Dan Scheuerman is a writer and musician living in Omaha.