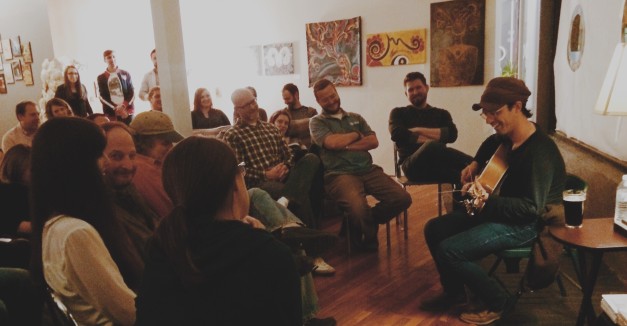 White wooden chairs sat next to taupe leather couches in a mismatched collection. Inside The Apollon art gallery in South Omaha on Friday, rows of chairs and loveseats were arranged for an intimate acoustic performance.

Alec Ounsworth, Clap Your Hands Say Yeah’s singer and songwriter, was given a small space against the wall to perform, only a couple yards away from the first row of chairs.

Ounsworth’s chair sat next to a small wooden table topped with a curvy lamp, a water bottle and a pint of dark beer. An unzipped suitcase, presumably the traveling one-man band’s, was tucked away next to the merch table, the sleeves of a light green coat attempting to cover the exposed zipper.

When Ounsworth appeared and sat in front of the Apollon’s covered windows, he didn’t announce himself. He didn’t clear his throat or ask the audience to quiet down. He peered through round, clear-framed glasses as he hunched over his acoustic guitar.

Ounsworth had been playing a slew of living room shows for his tour celebrating the tenth anniversary of Clap Your Hands Say Yeah’s debut self-titled album. The album achieved notable success for its entirely DIY release, and a 2005 NPR feature gave the Philadelphia band notoriety as a pioneering “blog-rock” band, with music made popular by articles written by emerging music blogs.

Without the rest of the band — Ounsworth said he “imagines” they’re working on their own music — the freedom to flourish with guitar and voice crescendos gave the songs a much more emotional edge. Ounsworth’s voice moved with the strength of his guitar, whimpering with quiet finger picks and growing powerful with strong, full chords.

“Gimme Some Salt” was nearly unrecognizable without the deep, heavy bass line that drives the original. Ounsworth’s acoustic version spotlighted a more emotional voice with lyrics like “curious velocity brought me to a halt.”

A harmonica mouthpiece replaced the synth in Clap Your Hands Say Yeah’s popular “The Skin of My Yellow Country Teeth.” His lyrics slurred in a delicate voice, his neck quivering with his vibrato. Shadows danced on the gray wall behind him as he leaned into his guitar, the pluck of each string producing a bright, sunny sound.

“That’s usually where I end, but I’m going to keep going,” Ounsworth says as he sipped the beer, noting he wasn’t worried about the constraint of time or the set list that rested at his feet.

The laid-back nature of the set encouraged open discussion with the audience. A couple cuddled on a brown, plaid couch as Ounsworth pointed out that he remembered one of the audience members from a show she attended last year. They laughed and shouted vague memories of that night to each other across the room. Ounsworth answered questions from the audience, saying Tom Waits and The Beatles are brilliant songwriters and he is most influenced by his friends’ music.

The purpose of the tour was to play Clap Your Hands Say Yeah in its entirety, but Ounsworth strayed from the track listing, bumbling through a cover of “Absolute Beginners” by David Bowie and asking for requests of other Clap Your Hands tracks.

“Satan Said Dance” from 2007’s Some Loud Thunder was one of the requests. Ounsworth hesitated but agreed to play it, telling the story of how the song was electronically created as he tuned the guitar accordingly. The dance song took a more melancholy folk turn in the acoustic version as Ounsworth bobbed his head to the fast beat.

A decade of playing the songs surely gave Ounsworth the opportunity for his tone to mature: The chance to freely and intimately dissect the songs he wrote solo offered a new and tangible dimension.

On the 2005 record that propelled his band to internet fame, Ounsworth’s voice was choppy and refused to enunciate. Friday, often sounding close to tears, Ounsworth used his raw, emotional voice to recapture the personal lyrics he wrote so many years ago.