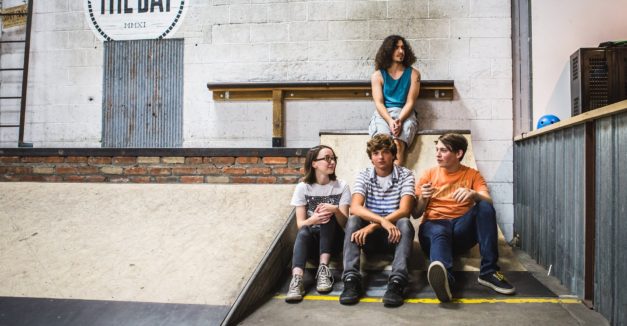 For the members of The Way Out, the biggest obstacle is the one they have the least control over: their age. That hasn’t stopped them yet.

Though its members are all still teenagers, the Ashland four-piece is already checking boxes. A chance meeting between Mari Crisler and Levi Hagen at Academy of Rock Omaha in 2012 (and the addition of Reed Tiwalt and Nick Ulrich) led to forming a band, and soon, increasingly regular Lincoln and Omaha gigs. In May, The Way Out’s strong debut EP Good Grief dropped, merging contemporary indie rock and classic pop-punk with Crisler’s crisp lyrical imagery. The following month they fired up the van, hitting eight states for their first Midwest tour. In October, the band plays The Bay for Saturday night of Lincoln Calling.

“We’ve always set goals for ourselves as a band,” Crisler says. “Our main goal was get out there and try to mean something. That’s how we started … and I think we’ve definitely accomplished that.”

In the latest artist profile, Crisler discusses the band’s small-town roots, her punk rock influences and the obstacles facing a teenage band. Watch it below:

Credits:
Video: Lauren Farris
“Top Down” by The Way Out