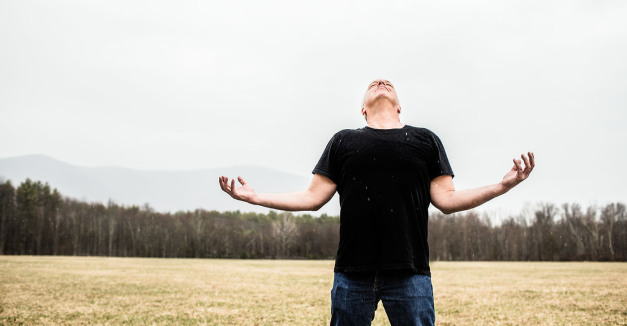 Aaron Freeman experienced his in a giant tidal wave: an onstage meltdown at a show in Vancouver in 2011. Drug and alcohol abuse had long haunted the Ween frontman, who performed under the moniker “Gene Ween,” but that night was its nadir. After slurring the words to a few songs, outright forgetting the lyrics to others, and crumpling in a heap on the ground, his bandmates left him to finish their concert alone.

If one must hit rock bottom to climb back up, Freeman realized immediately he had done just that. At the time, he knew that everything had to change. Not just the drinking. Not just the drugs. He needed a completely different perspective, and the company of those who could see past his problems or were not aware of them at all.

That meant his time with Ween, his life as Gene Ween, was finished.

“I was leaving Ween, and getting sober at the same time,” Freeman says. “It wasn’t one or the other. I had to do both.”

Leaving his band of 29 years was an act he’d long contemplated, lamenting that Ween had become a “showcase band,” no longer pushing forward but simply going through the motions. The band had made their living on whacky experimentation across many styles, maintaining a sense of humor bordering on the absurd. Instead of pushing the envelope, Freeman says he felt the band had become a caricature of itself.

He now writes and tours as a solo act, FREEMAN, and will support his new self-titled record at Omaha’s The Waiting Room this Saturday (RSVP here). Freeing himself from the creativity-stifling fetters of his former band allowed Freeman  to make a record that is at once a catharsis from his struggles and an emblem of what sobriety means for him.

Freeman would tell you not much has changed about his songwriting approach. Indeed, his new tracks play as a more sophisticated Ween while maintaining the genre-bending dynamism that defined his former band’s sound. The album is lush with imagery, as in the folky nighttime nature walk of “Black Bush.” Its guitar sizzles and sweats on the sultry “Gimmie One More.” On “More Than The World,” it tenderly takes the listener by the hand and coos, “As heavy as I am to be with/I need you I need you I need you/I love you more than the world.”

It also exercises demons on “(For A While) I Couldn’t Play My Guitar Like A Man” and “Covert Discretion.” Freeman wrote the latter after the fateful Vancouver show as a way to lay the incident to rest.

“Your brain is rewiring itself, you’re getting used to living in a different way, and that’s a big part of sobriety,” Freeman says.

Mirroring that sentiment, the actual production of the record presented its own new frontier. Freeman and his band had only nine days of studio time, a vast departure from what he was accustomed to. Some Ween records would take a year or more to complete.

Working within that time frame meant the band was forced into marathon sessions. “We started at eight or nine in the morning, and would just go until maybe one o’clock in the morning. I’ve never done anything like it,” Freeman says. “[It was] like Motown.”

Two sets of demos were prepared for each song, and all tracks were heavily rehearsed. Freeman made every effort to streamline the process, as any break from the script could have exacerbated their time crunch.

Writing the whole thing solo, having complete creative control over the album’s direction, seemed to affirm his recovery process.

“I was nervous about [recording a solo record] in the beginning, but once I started getting used to it, it was really fun. It was very empowering and positive for me,” Freeman says.

The album also contains strong spiritual tones, the use of which can be attributed to Freeman’s major life change as well as his comfort behind the production reins. Freeman cites his interest in ancient Judaism and the Kabbalah, which pours forth on the cross-desert ride of “El Shaddai.” He also explains how his general spirituality has guided him throughout his journey.

“Like the Buddhists say, you just gotta suffer through a lot. Life is suffering, but that’s not necessarily a bad thing. You have to accept the fact that stuff’s gonna hurt and you have to ride it through.”

If not for one very important experience, there might not have been a record at all.

After completing his stay at a rehab facility, Freeman and his family moved to Woodstock, NY. He was offered a position teaching children at the Paul Green Rock Academy (picture School of Rock) by its founder, which provided Freeman an escape from his everyday problems, as well as a pure musical outlet.

He says that he began to pay attention in earnest to his own voice, chord progressions, and different musicians, all of which brought what he calls his “musical mind” back to the surface.

“I really don’t know if I ever would’ve written a record without working there. Seriously.”

At 44, Freeman is adjusting to everyday life as if he were in his twenties.

“It is a big Peter Pan syndrome when you’re in rock ‘n’ roll. You really get taken care of,” Freeman says. “I’m slowly learning how to adapt to normal society.”

That includes being accountable not only to himself, but also to his family, something he says is all part of recovery.

Ironically, if there is one thing that sobriety won’t change about Freeman, it’s his performance self. Gene Ween is theoretically inseparable from Ween the band. It is part of the gimmick, and to hold it so dearly seems to fly in the face of his own sobriety.

For the erstwhile Gene, however, the way he writes and plays music is divorced of drugs and alcohol. Freeman can still shift in-album from airing his grievances to whispering tender sweetness. Then, he’s wailing about a soaring golden monkey in the time it takes to get from one track to the next. Ween mask or no, he will always be a little goofy, and he will always write what flows from him, even if it sounds straight from a Ween record.

Hell, he will even trot out some of the old tunes in concert. But the Gene Ween of old is still passed out on that stage in Vancouver, where he will remain as long as Freeman is clean.

Perhaps Freeman may never rid himself fully of Gene Ween. Maybe all he can do is try to eliminate the erratic, self-destructive behavior of his alter-ego while remaining the creative, experimental songwriter that was Aaron Freeman all along.

“I have my same thing that I’ve always done. I don’t think about change so much. There’s a lot of Ween in [the new record], and that’s just the way it is.”