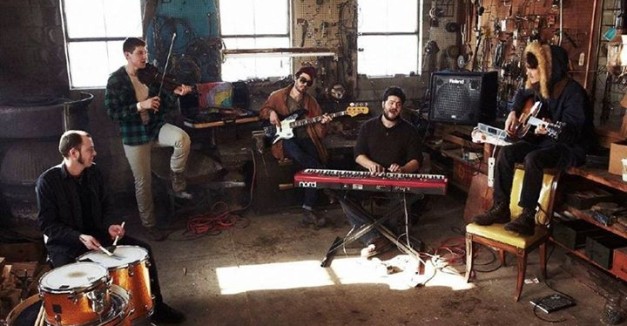 The Felice Brothers
with Robert Ellis

The Felice Brothers kicked off in 2006. They did what any delinquent youths, lost in upstate New York with dim job prospects would do: become obsessed with traveling the world and playing extremely loud rock and roll. After settling on minor matters like who plays what (Ian Felice- vocals/guitar, James Felice- accordion/keys/vocals, Greg Farley- fiddle/vocals, Josh Rawson- bass/vocals. Recent addition David Estabrook- old friend/new drummer – completes the current line up), the band procured instruments, cans of sardines and packed up tents and devoted their lives to studying the art of song craft, from Hoagie Carmichael to Kurt Cobain. They also began figuring out how to actually play those instruments. It was a long way to the top.
The Felice Brothers name is a reference to James and Ian Felice’s provenance. They were two of seven children born to a family in upstate NY. They started young, playing under old bridges, back yard BBQs, small town sidewalks, and it’s in that spirit that eventually took their act to NYC, busking the subway platforms where they made a couple new friends and a whole lot of enemies with the MTA and New York’s Finest. Without day jobs or steady places to sleep the boys completely immersed themselves in their new line of work. They spent their days writing hundreds of songs in an old chicken coop, their nights hustling weekly gigs at any restaurant or bar that would feed them.
After a few years their devotion and extreme lifestyle choices paid off. The band has been traveling the world for 8 years now, playing major festivals like Coachella to Midwestern dive bars to ancient churches in Bavarian Germany. They are known for their wild and intense live shows that channel some kind of Lynchian Replacements fever dream. Their sincere, intelligent song writing always the backbone of their live interpretations.
Oddly enough, The Felice Brothers’ new album Favorite Waitress marked the first time the band ever recorded in a proper studio. Produced by the band’s longtime producer and collaborator Jeremy Backofen, the album is their most fully realized statement yet. After diligently working for a year, mining through a hundred songs worth of material, they took off last December for Omaha and knocked the whole thing out in a week. During the year of pre-production the band transformed into the most disciplined assembly line in the music game: Brill building meets halfway home. Focusing on playing together in a room, the band was all muscle, a study on five piece minimalism, able to power through scum bucket linoleum floor blues and turn on a dime into mysterious and lush dreamscapes. They were a classic car glimpsed in a chrome dream, sleek and transparent blazing through the night sky. Or some might say they became your favorite waitress, a comforting face calling you by your name knowing exactly what you need and laughing at all your jokes. Getting you through another rainy day. They built their vast world of sound and now they are simply driving through it.
Favorite Waitress is about fantastic escape from the terrifying realities of modern life. First single “Cherry Licorice” is an ode to never growing up, retreating from a domestic nightmare into a world of soda pop rivers and candy corn comas. “Meadow Of A Dream” feels like that perfect summer day in the woods lost in some primitive western shoot out with the neighborhood gang, when you wish you would never hear any parent cry for supper. “Saturday Night” describes the mythical properties of that magical time of the week when anything can happen, searching through the smoke and shit talk with a couple bucks in your pocket and a head full of teeth that could use loosening.
Favorite Waitress is The Felice Brothers’ 5th official release (in addition to 6 mix-tapes) and marks their first release for new label Dualtone (The Lumineers, Shovels & Rope, Guy Clark). These 11 total releases range from the backwoods kitchen sink folk of God Bless You, Amigo, to the swamp strip-mall Space Odyssey of Celebration, Florida. The band has appeared at Bonnaroo, Newport Folk Festival, and Coachella and toured with the Killers, Mumford and Sons, and Bright Eyes.