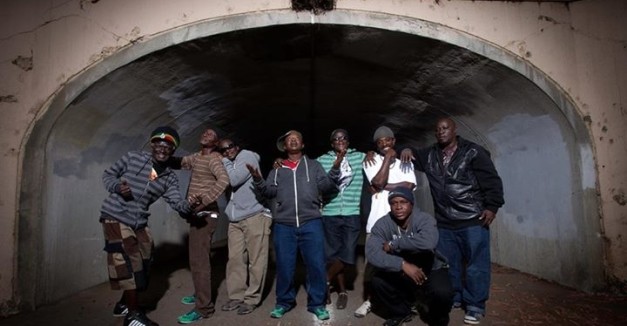 Sierra Leone’s Refugee All Stars have risen like a phoenix out of the ashes of war and enflamed the passions of fans across the globe with their uplifting songs of hope, faith and joy. The band is a potent example of the redeeming power of music and the ability of the human spirit to persevere through unimaginable hardship and emerge with optimism intact. From their humble beginnings in West African refugee camps Sierra Leone’s Refugee All Stars have performed on some of the world’s most prestigious stages and matured into one of Africa’s top touring and recording bands.

Their incredible story was documented over three years by American filmmakers Zach Niles and Banker White and the resulting film was released as a critical success, introducing the world to the personalities and dramatic stories behind the band, not to mention their instantly appealing music.

After the end of the brutal civil war, with the 2005 release of the documentary film and the band’s debut album, “Living Like A Refugee” (2006), the Sierra Leone’s Refugee All Stars found themselves launched from SXSW in the US and found themselves playing in front of enraptured audiences of tens of thousands at New York’s Central Park SummerStage, Japan’s Fuji Rock Festival and the revered Bonnaroo Music & Arts Festival. They appeared on the Oprah Winfrey Show, contributed a song to the “Blood Diamond” film soundtrack, participated in the U2 tribute album “In the Name of Love: Africa Celebrates U2”, and earned praise and backing from Sir Paul McCartney, Keith Richards, Ice Cube, Angelina Jolie and others inspired by their life-affirming story and captivating music. In one of the most surreal moments of their climb to fame, Sierra Leone’s Refugee All Stars opened for Aerosmith at the 12,000-capacity Mohegan Sun Arena in Uncasville, Connecticut.

Sierra Leone’s Refugee All Stars second album “Rise and Shine” (2010) was recorded with veteran producer Steve Berlin (Los Lobos) at Piety Studios in New Orleans. They played the fabled Congo Square stage at Jazzfest that Spring and proceeded to tour the US and Europe for the next two years. They opened for DISPATCH at Red Rocks, played on Jam Cruise, recorded with Dan Zanes on “Little Nut Tree” and starred in two Playing for Change videos.

For their third album “Radio Salone” (2012) they teamed up with producer and keyboardist Ticklah / Victor Axelrod (who has worked with Amy Winehouse and Sharon Jones & the Dap Kings) in Brooklyn, NY.

In 2014 the band proudly celebrate the 10-year anniversary of their astounding and uplifting career on their fourth studio album, “Libation”. For these beautiful recordings, they go back full circle to the rootsy, acoustic, “around the campfire” sound that appeared on their first album, much of which was recorded in the refugee camps during their years in exile from Sierra Leone.

It’s a family reunion as well, as they reunite with Chris Velan, a producer on their debut release. The new album was recorded in the Green Mountains of Vermont and mixed in London by Velan and renowned British producer Iestyn Polson, known for his work with David Gray, Patti Smith, David Bowie and others.

They’ve kicked off this year’s tour at the Amnesty International Human Rights Conference in Chicago, a concert at the iconic Apollo Theater in Harlem, New York and a special private appearance at the United Nations.

Welcome Sierra Leone’s Refugee All Stars as they hit Omaha before embarking on a month long European tour.