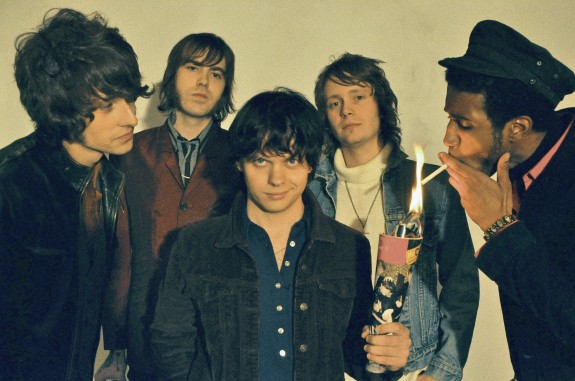 garage/rock/blues show featuring the Booze and the Biters, both from Atlanta, GA!!

The Biters hail from Atlanta, GA. A young pop, rock, punk, throwback band, these guys have everything it takes to put on one hell of a show. The songs make me wanna go to the roller skating rink and play arcade games or kill some beer at the moon tower on a Friday nite. All the coolest elements of Cheap Trick, Thin Lizzy, AC-DC, Bowie and even the Beatles. Huge background vocals bring to mind Sweet, Slade and Queen.
http://www.myspace.com/thebiters

The Booze are a stylish Atlanta band that plays soulful garage rock. Lead singer Chaz Tolliver strutted around the stage and danced with the mic stand while singing his young, gap-toothed heart out. His short stature acted as a casing for his firecracker of a voice, full of energy and spark.
The combination of chiseled facial features, finely groomed afro, hat/sweater/tie ensemble and toothpick precariously hanging from the corner of his mouth made guitarist and The Booze’s creative center Randy Michael look like he walked out of a GQ photo shoot from the 1960s. The classic plunk of his Epiphone guitar formed crisp and clear solos and bridges over the flowing stream of blue-eyed soul created by bassist Wesley Flowers, guitarist Brian Roberts and drummer Shane Human. The band even did a cover of Martha & the Vandelles’ 1963 hit “Heat Wave.” While these mods didn’t really fit in so much on the punk rock bill, the audience was pleased nonetheless.
http://www.myspace.com/thebooze
(by: Alex Adan  http://majesticdetroit.com)

locals Rock Paper Dynamite mixture of grunge, powerpop and rock have made them a popular 0maha band
http://www.myspace.com/rockpaperdynamite1