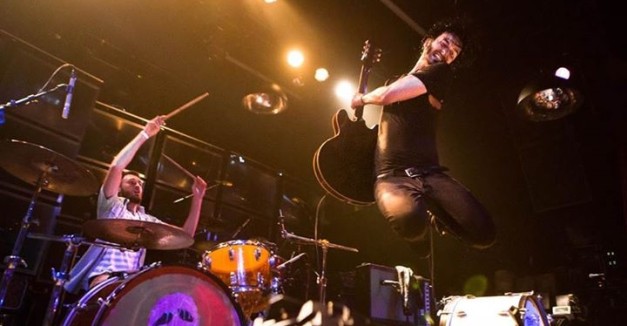 REIGNWOLF is invading the streets unleashing throaty soulful howls, bleeding guitars plugged into smoky half stacks, and the stomp of a vintage Ludwig bass drum. The wolf sound is fierce and instinctual, a collision of rock and roll.
Born in the Great White North, Jordan Cook was influenced by his musician father, jamming around the local club circuit and public school district in Saskatoon, Saskatchewan by age 6. Two years ago, Cook packed up his gear and headed for Seattle, the only plan being to live out of his tent, free in the wild and simply see what materialized. He started gaining attention while buying low-end guitars at local pawn shops and began booking random shows. Reignwolf performances consisted of Cook playing solo with any instrument he could get his hands on, always keeping an eye out for an intriguing collaboration. Soon after arriving in Seattle, he was joined by the low end of brother Stitch and drum destroyer Texas Jo; this gripping combination only intensified the Reignwolf sound.
Reignwolf announced their arrival to the music scene using the DIY approach, gaining a loyal following by performing at local clubs and festivals such as Sasquatch, Coachella, Lollapalooza, Austin City Limits Music Festival, Voodoo Experience, and an opening slot for the 2013 Pixies tour. American Songwriter’s Top 10 Moments of Austin City Limits ranked Reignwolf #2, second only to Atoms for Peace, #1. Reignwolf hit the scene hard and gained momentum, and landed a coveted supporting slot on Black Sabbath’s Spring Canadian Tour in 2014.
Up until recently, “Are You Satisfied?” was the only official song released by the band. Their second song, “In The Dark” was recorded on Halloween night in New Orleans while in town for Voodoo Festival at Ani DiFranco residence, with husband/engineer Mike “Nappy” Napolitano. Wanting to capture the onstage spontaneity from their live shows, the highly anticipated first Reignwolf album is scheduled to release in 2014.
The Reignwolf experience is best summed up by one of his lyrics from “Electric Love”: “I gave you my soul, and I can’t give you anything more”… and onstage Reignwolf undoubtedly gives “it all.”