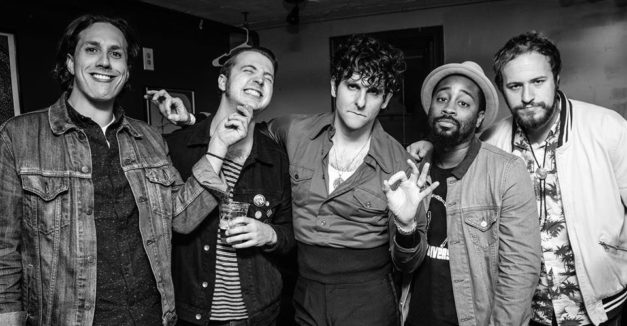 Low Cut Connie plays true, gut-bucket, tear-jerkin’, piano-pounding rock n roll. They shot to national prominence when their debut record, Get Out the Lotion, was hailed by critics across the US as one of the best albums of the year. Rolling Stone described their sweaty grooves as “chugging scuzzbucket boogie…equipped with whiskey breath and a satchel full of filthy jokes”.

The brainchild of two songwriters from across the pond, Adam Weiner (the piano bruiser from New Jersey USA) and Dan Finnemore (the garage rocker from Birmingham UK)…Low Cut Connie expanded into a five-man powerhouse line-up with the release of their second record, Call Me Sylvia. The debut single from the record, “Boozophilia” attracted significant notice across the country and was named by Rolling Stone magazine as one of the top 50 songs of the year. Jack White asked them to record a live session at his Third Man Records. The band tours non-stop, building their growing fanbase and establishing themselves as one of the best live acts around. The LA Weekly said of them, “their ferocious live show is unmatched in all of rock right now.” Everywhere they go, they carry a 350 pound piano with them, inspiring and titillating the crowds in every bar they enter, and bringing them into their expanding rock n roll tent.

Low Cut Connie was recently called “the essence of what rock n roll should be” by Greg Kot (Sound Opinions / NPR)..and the New York Times has said “their live show is a phenomenon.” They have been a rolling DIY caravan with an explosive live act bubbling under the surface of the music industry for 5 years, building an obsessive fanbase from all walks of life…white and black, straight and gay, young and old…salty lunatics of every persuasion. Even former President Barack Obama is a fan. He chose their anthem of low-brow American life “Boozophilia” for his Spotify Playlist and met with Weiner at the White House in 2016.

But with Dirty Pictures (part 1), Low Cut Connie moves beyond the drunken bar boogie they have become associated with into a deeper, darker, dirtier American life.

“We’ve been thought of as a great party band by so many people, and we wear that as a badge of honor, but I really wanted to go deeper with this record.” Weiner said recently. “We’ve been travelling this country now for a number of years, meeting people of all stripes, entertaining them in their bars and sleeping on their couches, laughing hard, holding them tight and sweating it out with them…I wrote this record really thinking about how people are feeling and living in this country these days. It’s a wild scene out there.”

Whether they succeed or not, Low Cut Connie always attempts to make us feel something real, something very raw. With Dirty Pictures (part 1), this little rock n roll band from Philadelphia attempts to undress America, laughing and crying real tears with us all night long.