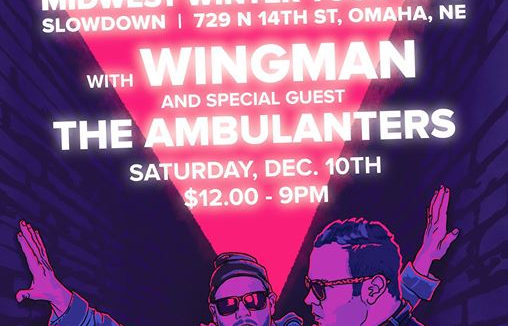 The Burkum twins define JAGAJA with a balance between sun-drenched reverie and true earthly aggression. The act is anchored firmly by the two brothers, and realized with support by a variety of musicians.

JAGAJA’s self-titled album was released in June 2016 to positive acclaim from Argentina to Japan, as well as College Radio across the US.

Wingman
Wingman is an alternative rock band from Minneapolis, Minnesota.
Through their numerous experiences contributing to rhythm sections, members Con Davison (vocals, guitar, drums) and Dan Stewart (vocals, bass) were seemingly doom-spiraling toward one another; Davison having moved from Texas to Minneapolis after a boredom in the pursuit of a musical career, and Stewart having experienced much the same in his hometown.

From the spark of a few unfinished demos and a desire to take the reins of a sound that was totally their own, the duo began writing songs in 2015 that would later become Wingman’s debut record, HONCHO.

Despite having only existed as Wingman for a short time, their debut record is “poised to rival the best releases in 2016, both locally and nationally,” and has received praise from the likes of Crack in The Road, Indie Shuffle and others.

Wingman’s HONCHO is a record full of dichotomy; it is both pop sensible and melancholy, driving and laid back. The songs detail the necessity of success and failure through fuzzy guitars and clean melodies, keeping the form simple and the themes complex.
HONCHO was released on June 10th, 2016

More info and music at http://theslowdown.com/