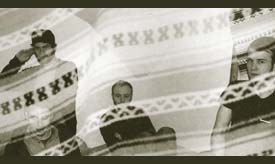 Jordan, Collin, and Matt started jamming together about 4-5 years ago in high school (all 20 now). Pretty quickly, formed a band and recorded a rough batch of songs. The first half of their existence was relatively low-key. Started off with a lot of basement jamming and the shows they would play were at friends' parties or at second-tier venues. About two years ago, they underwent a pretty dramatic transformation. Added Nate Ruiz on bass, took a more Americana/folk-oriented approach, and recorded their first EP. They started playing bigger shows around town and really honed in on their musicianship/chemistry. This past March they released their second EP, recorded by Cody Bailey and mastered by Doug Van Sloun, and have continued booking bigger and better shows and have started to plan their debut LP as well as play shows outside of the Omaha area.