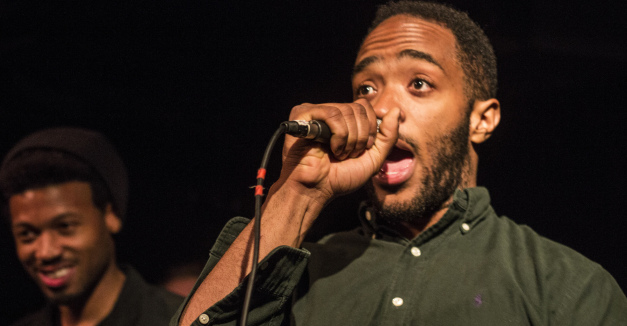 Hear Nebraska presents Kill County and Simon Joyner at O’Leaver’s on Oct. 17, and it now appears both bands are on the cusp of new releases.

We’ve premiered “Beat Up Iron,” Kill County’s first single from the forthcoming Broken Glass in the Sun, a completed record waiting on a release date.

Joyner will perform at O’Leaver’s with his full band of Ghosts on Friday, which he said in an e-mail will include Jim Schroeder of UUVVWWZ on guitar and Alec Erickson on bass. Joyner says his new record features all the “regular Ghosts” and some new additions.

Joyner says the new record is a stripped down, sparse effort compared to his last full-length, 2012’s Ghosts. The arrangements are primarily Joyner, Erickson on bass and Donahue on drums.

Catch the full band next week and look for the new Joyner record this spring. RSVP to the show here.

Quick turnaround: Last night, Icky Blossoms played University of Nebraska-Omaha’s Maverick Mayhem homecoming celebration with Kethro and Mean Street. You can catch the event’s highlight reel as of this morning, produced and edited by Eric Anderson. Icky Blossoms’ performance of “Deep in the Throes” carries the video.

The free event runs until 3 p.m.

Hova, a noted synesthesiac, and her husband Matt have built a program to simulate her experience of seeing notes and music as color.

Matthew Hansen wrote the article to preview the Hovas’ presentation of their synesthesia machine at TedxOmaha on Oct. 25.

The article explains, as best as words could, Hova’s experience with synesthesia, a neurological condition that blends her senses. To see the simulator in action, and a bunch of other talks, get tickets to TedxOmaha here. Our Molly Misek shot the below video with Hova earlier this year.

Lincoln Calling heads into its fourth night tonight with a Sower Records showcase at Duffy’s, (including a Bonehart Flannigan album release party), Bailiff at Vega, The Renfields at Tower Square, A Ferocious Jungle Cat plays at The Bourbon and Blue Bird plays at Yia Yia’s. Sidewalk Chalk and Thirst Things First play The Zoo Bar.

Tomorrow morning, Sidewalk Chalk will play an impromptu show on the steps of Everett Elementary at 11 and C streets. The free performance begins at 11 a.m.

Lincoln Calling concludes on Sunday with Oketo and The Wondermonds at Tower Square and the Zoolarious Comedy Showcase at The Zoo Bar.