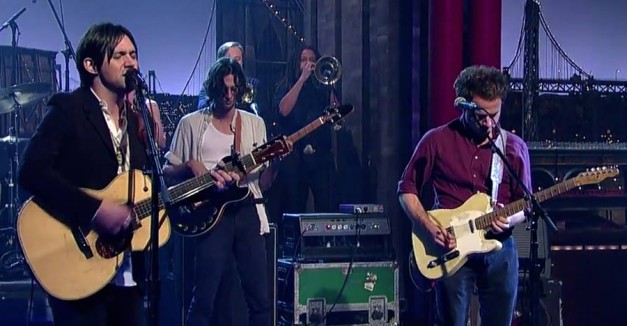 “The name of the mountain is Upside Down Mountain.”

Even through Conor Oberst’s sharp-edged performance of “Hundreds of Ways” on The Late Show last night, many viewers were probably holding out for David Letterman’s patented non-banter as he strode out to meet Oberst.

After the song, the television icon — in his twilight months on CBS — called the album a “mountain” and then coyly asked if Oberst was paying his 9-piece band. Last night, that band included the Los Angeles rock band Dawes (his backing band all tour long). Bright Eyes’ Nate Walcott was on hand as a trumpeter, with two backup singers, as well, picking up the parts played by First Aid Kit sisters on the studio album.

“Hundreds of Ways” is the third track and first single from Oberst’s Upside Down Mountain, which came out on Nonesuch Records back in May.

David Bazan returns to Omaha on Nov. 13 with Passenger String Quartet and Nebraska-favorite David Dondero to play The Waiting Room. Tickets go on sale Friday at 10 a.m. Bazan has been performing solo for nearly 10 years and has released just two albums in that time, Curse Your Branches and Strange Negotiations. He’s perhaps best known for his work with influential indie-rock band Pedro the Lion, which split after 2004’s Achilles Heel.

Bazan’s music is characterized by a seemingly personal narrative and charming, if often downtrodden, instrumental work. In his Pedro the Lion days, he often explored religion. These days, the scale has been smaller, but no less meaningful: alcoholism, growing away from friends, loss.

Our former managing editor, Michael Todd, spoke with Bazan when he came through Omaha last year about coming to terms with what you can’t control and balancing an artist’s life with a stable family.

Today on the site, you can dig into Mat Cox’s new track “Gavin’s Point Dam,” which we premiered yesterday. Chance Solem-Pfeifer, who wrote about the track, says it begins as “a deluge of muddy water wipes out a dam.” “Gavin’s Point Dam” is the second release from Cox’s Aug. 8 album Nishnabotna on Sower Records.