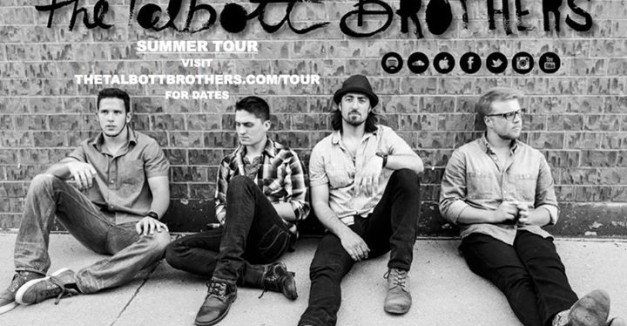 A rock band from the heartland.
https://thetalbottbrothers.com
Omaha, NE

The Talbott Brothers is led by brothers, multi-instrumentalists and singer-songwriters Nick and Tyler Talbott. This "rock band from the heartland" plays alternative rock and roll with a pop-like melody that you can't get out of your head, infused with blues that won't let your body stop moving, and harmonies that have been compared to the Everly Brothers and butterscotch chocolate.

“The Talbott Brothers draw on classic rock influences — nearly always open to harmony — with both the pop structure of a John Mellencamp song, as well as with that pop star’s America-by-birds-eye-view perspective.”
- Chance Solem-Pfeifer (Hear Nebraska)

Their latest release, the “Coming Home EP” illustrates the band’s “rediscovered sound” and reestablishes their electric guitar riffing roots, acting as a segway between their second and soon-to-be third studio album.

“With spot on harmonies and the eerie synchronicity shared by especially close siblings, The Talbott Brothers have created something truly special.”
- Amy Michalik (Folk Geek Magazine)

The Talbott Brothers have spent the better part of two years on the road carefully crafting their sound and touring nationally sharing the stage with “America’s local band” Red Wanting Blue and Billboard’s top new country artist of 2009, Justin Moore.

The Talbott Brothers are currently backed by bassist Ben "Bones" Frerichs and Jake Culey on drums.